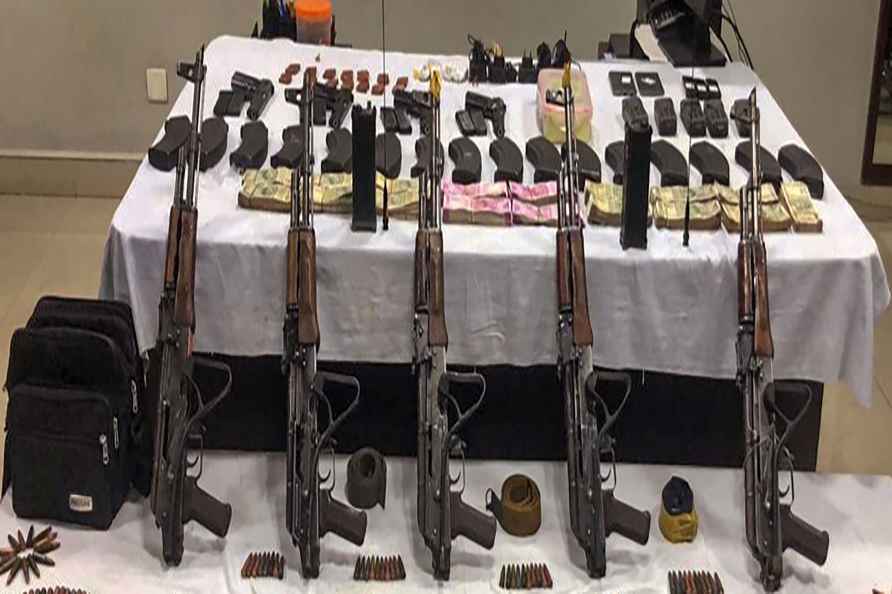 Chandigarh, Jan 21 : Thwarting a possible terror attack ahead of the Republic Day, Punjab Police have recovered a 40mm under-barrel grenade launcher (UBGL) with two 40mm compatible grenades, 3.79 kg RDX, nine electrical detonators and two sets of timer devices for IEDs from Gurdaspur, said Inspector General of Police (Border Range) Mohinish Chawla on Friday. The UBGL is a short-range grenade launching area weapon with an effective range of 150 metres and it could be detrimental to the VVIP security as well. The recovery was made on the disclosure of Malkeet Singh, a resident of Gazikot village in Gurdaspur district, who was arrested by the police on Thursday. The police have also booked co-conspirators Sukhpreet Singh, Tharanjot Singh and Sukhmeetpal Singh, all residents of Gurdaspur, besides, Pakistan-based International Sikh Youth Federation (ISYF) chief Lakhbir Singh Rode and fugitive gangster Arshdeep Singh, alias Arsh Dalla. IG Chawla said investigations revealed that the arrested accused Malkeet was in contact with Sukh Ghuman, who had further conspired with ISYF chief Rode and Dalla, a resident of Moga now based in Canada. The consignment of explosives was sent by Rode from Pakistan. Senior Superintendent of Police Nanak Singh said the role of Malkeet Singh in retrieval and delivery of fire arms and explosive intended for recently busted ISYF terror module busted by SBS Nagar Police and was revealed during investigation therein. "Investigations are on to identify remaining members of the busted terrorist modules, recover the remaining terrorist hardware received by them and unravel the entire conspiracy, hatched by ISI of Pakistan and Lakhbir Rode," he added. The role of Rode was also found in killing of comrade Balwinder Singh at Bhikhiwind on October 16, 2020, besides in the recovery of tiffin IED, RDX, arms and ammunition from his relative Gurmukh Singh Rode from Jalandhar in August 2021. In November-December 2021, Gurdaspur Police had busted two terrorist modules controlled by the Pakistan-based ISI and arrested four members of the modules, besides recovered around one kg RDX, six hand grenades, one tiffin box IED, three electrical detonators and two pistols. /IANS

New Delhi, May 19 : The Parliamentary Standing Committee on Personnel, Public Grievances, Law and Justice is slated to hold a meeting for consideration of 'The Mediation Bill, 2021' on Thursday. […]

By B Shrikant Mumbai, May 19 : Though the players put in the performance in the field, there is a batch of people that works in the background and makes it possible. A modern-day sports team has a […]

Thiruvananthapuram, May 19 : Bodies of two Kerala policemen, who were missing from their police camp in Palakkad, were found in a paddy field of the same district on Thursday. Both of the havild […]