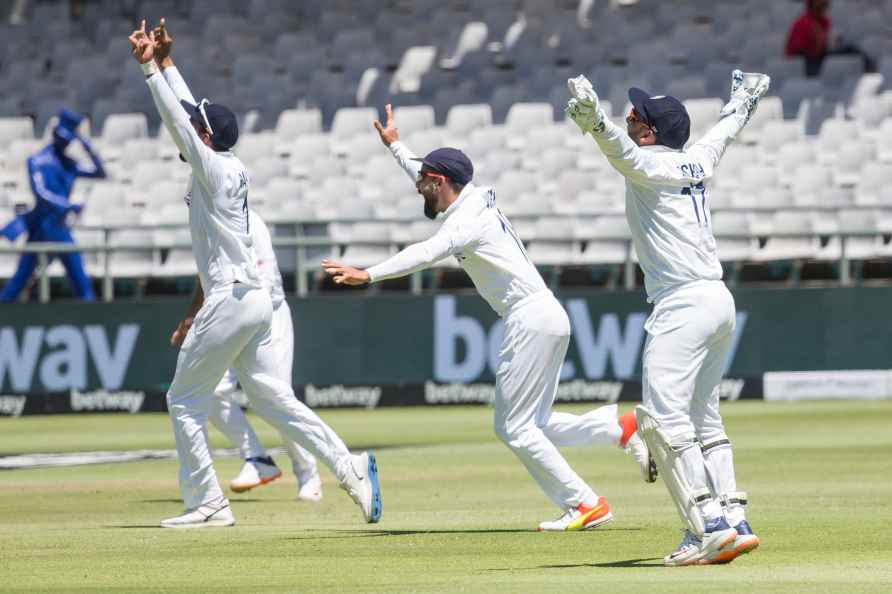 [Cape Town: India appeal for a wicket during the second day of the third and final test match between South Africa and India in Cape Town, South Africa, Wednesday, Jan. 12, 2022. /PTI] Cape Town, Jan 12 : India top-order batter Cheteshwar Pujara believes if the visitors' bowl well in the right areas, then they can restrict South Africa to a total less than 223 made by them in the first innings. He added that India could have made 30-40 more runs in the first innings and reckoned 275 to be a good total on the pitch at Newlands Cricket Ground. "We definitely should have scored 30-40 runs but we are confident in our bowling line-up. If we bowl in the right areas then we can restrict them. I think 275 is a good total on this pitch," said Pujara in a chat with broadcasters before the start of day two. Pujara pointed out that a batter cannot feel like being set on a pitch like this. "You might feel there's not enough when a partnership is building but there's one ball which can do a bit and can surprise you as a batter even when you are set." He also suggested that there is a lot for the bowlers to gain from the pitch. "It is a true pitch. There is enough in it for the bowlers but if you apply yourself, if you are set then you get value for your shots. I thought it is a very good cricketing pitch." The 33-year-old signed off by saying that he was disappointed with not being able to convert a good start into a big score. Pujara had made 43 in the first innings and was India's second highest run-scorer after Kohli's resolute 79 on day one. "You are never set and need to know which shot to play and which shot to avoid, when you are in you have to make it count which I couldn't do but like Virat did." /IANS

Kuwait to lift all Covid curbs from May

Kuwait City, April 28 : The Kuwait government announced its decided to lift all Covid-19 restrictions starting from May 1. The wearing of face masks will no be longer mandatory but an option, bo […]

Karachi, April 28 : Investigators have said the suicide bombing at the Karachi University Confucius Institute that killed three Chinese academics and their local van driver was aimed at sabotaging tie […]