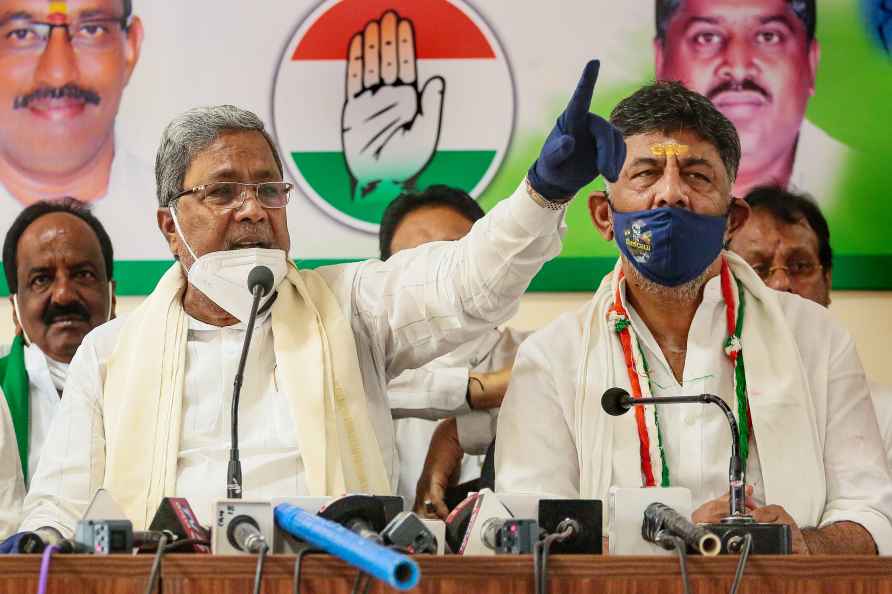 [Kanakapura: Former Chief Minister Siddaramaiah and KPCC President D K Shivakumar addresses a press conference before the start of the 3rd day of the 10-day padayatra from Mekedatu to Bengaluru to demand the implemention of Mekedatu water project, in Kanakapura near Bengaluru, Tuesday, Jan. 11, 2022. ( /PTI] Bengaluru, Jan 11 : The National Commission for Protection of Child Rights (NCPCR) has sent a letter to the Karnataka Police Department to initiate action against state Congress President D.K. Shivakumar for failing to follow Covid appropriate behaviour with school children during the 'Mekedatu Padayatra'. NCPCR has further asked the department to submit the Action Taken Report within seven days. Priyank Kanoongo, Chairperson, NCPCR on Monday sent the letter to Praveen Sood, the Director General and Inspector General of Police, Karnataka in this regard. "The commission has taken suo-moto cognizance of a video uploaded on Twitter wherein it can be seen that KPCC President D.K. Shivakumar met school children during the event Mekedatu Padayatra, thereby indulging children into political activity," the letter said. In the said video, it can further be seen that the children as well as KPCC President are without masks further failing to follow Covid-19 appropriate behavior. In view of the above, the Commission deems it appropriate to take cognizance under section 13 (1) (j) of CPCR Act, 2005, and observes prima-facie violation of provisions under Juvenile Justice Act, 2015, Epidemic Disease Act, 1897 and Disaster Management Act, 2005. The letter further stated that it is requested to look into the allegations made against Shivakumar to ensure the welfare and safety of children and further submit an Action Taken Report within seven days. The state police department has lodged an FIR against Shivakumar, Opposition leader Siddaramaiah and 30 others in connection with defying curfew orders and carrying out the padayatra. Thousands are gathering for the padayatra, raising fears of the spread of Covid-19 in the state. However, Shivakumar had stated that the government is showing fake numbers to scuttle the padayatra. He has also refused to undergo Covid test. /IANS