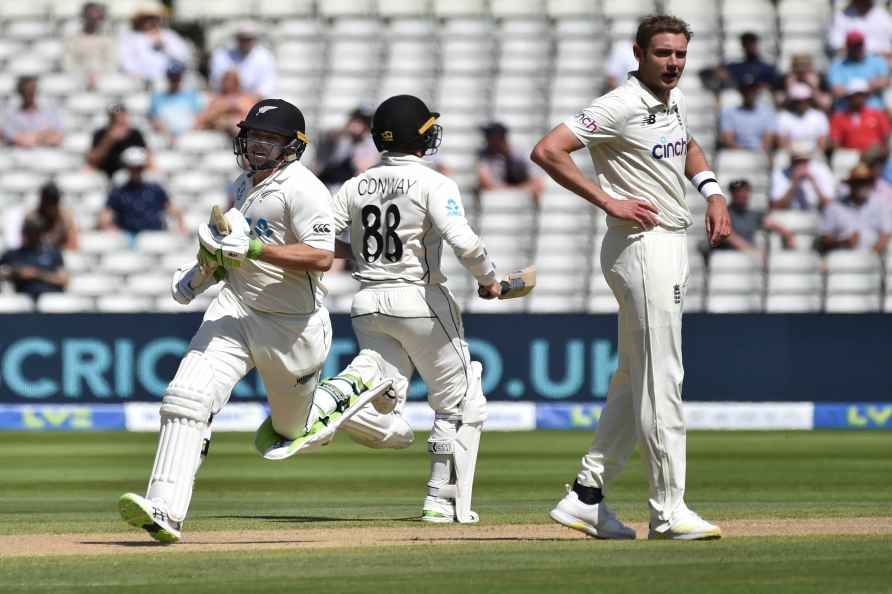 Christchurch, Jan 10 : New Zealand ended the second day of the Christchurch Test firmly in control after taking a 395-run lead over Bangladesh, here on Monday Bangladesh were bowled out for 126 by the end of the day - trailing New Zealand's 521/6 by a mammoth 395 - with Boult going past the milestone of 300 Test wickets with his 5/35. New Zealand resumed on the second morning on 349/1, with Devon Conway bringing up his third century in only his fifth Test match. Captain Tom Latham brought up his double century at the other end, as New Zealand continued their domination in the first session. Conway was eventually run out for 109, ending a 215-run partnership with Latham. In walked Ross Taylor to a standing ovation and a guard of honour, the veteran playing his final Test. Taylor cracked four fours during his 39-ball stay, as New Zealand looked to up the ante. That meant the wickets flowed as well, and Bangladesh picked up four in the first session, including that of Taylor's. The Black Caps picked up the scoring rate after Lunch. Latham was the aggressor, and eventually got out for 252, the highest individual score at the Hagley Oval. New Zealand declared at 521/7, but not before wicketkeeper Tom Blundell joined the party and scored a quickfire 57 (not out) off just 60 balls. Bangladesh were looking to build on their historic Test win at Mount Maunganui but Boult and Southee came out firing, claiming four wickets before Tea to leave the visitors struggling at 27/4. Boult picked up his third wicket of the first innings shortly after the break, inducing an edge from Liton Das for nought. From 27/5, Bangladesh found some fight in Yasir Ali (38*) and Nurul Hasan (41). The two steadied the ship with a 60-run partnership for the sixth wicket before Southee got the crucial wicket of Nurul, trapping in front. Boult then returned for another spell, and soon had Mehidy cleaned up for his 300th Test scalp -- he became just the fourth New Zealander to take 300 Test wickets, after Richard Hadlee, Daniel Vettori, and Southee. The rest of the Bangladesh line-up crumbled, and the visitors now face a huge task to stay alive on the third day. Brief scores: New Zealand 521/6 dec. (T Latham 252, Conway 109, Young 54, Ross Taylor 28; Shoriful Islam 2-79, Ebadot Hossain 2-143) v Bangladesh 126 all out in 41.2 overs (Yasir Ali 55, Nurul Hasan 41; Trent Boult 5-43, Tim Southee 3-28). /IANS

A lot of work goes on behind the scenes to ensure consistency in performance: RCB's Mike Hesson
Kolkata, May 25 : Royal Challengers Bangalore (RCB) director of cricket operations Mike Hesson has attributed "some real consistency" and keeping "cal

Miller reveals he was nervous initially and Pandya told him to just play good cricket shots
Kolkata, May 25 : Gujarat Titans batter David Miller has revealed that he was "nervous" when he came out to bat in Qualifier 1 against Rajasthan Royal

Why RR skipper Samson feels shortchanged by the Eden Gardens wicket
Kolkata, May 25 : Rajasthan Royals skipper Sanju Samson's team did everything right while batting on a "two-paced" wicket, putting up an imposing 188/

Richa Chadha, Tehseen Poonawalla get into a online spat over Kangana's 'Dhaakad'

Mumbai, May 25 : Bollywood actress Richa Chadha and Tehseen Poonawalla got into a debate over the box office collection of 'Dhhakad'. While Tehseen has criticised those who were trolling Kangana […]

Los Angeles, May 25 : The president of DC Films testified Tuesday that the studio considered replacing actress Amber Heard for 'Aquaman 2' out of concern that she lacked chemistry with star Jason Momo […]

A lot of work goes on behind the scenes to ensure consistency in performance: RCB's Mike Hesson

Kolkata, May 25 : Royal Challengers Bangalore (RCB) director of cricket operations Mike Hesson has attributed "some real consistency" and keeping "calm under pressure" as the reasons for the franchise […]

Ranchi: Suspended IAS officer Puja Singh comes out of a special ED court where she was produced in connection with a money laundering case, in Ranchi, Wednesday, May 25, 2022. ( /PTI […]