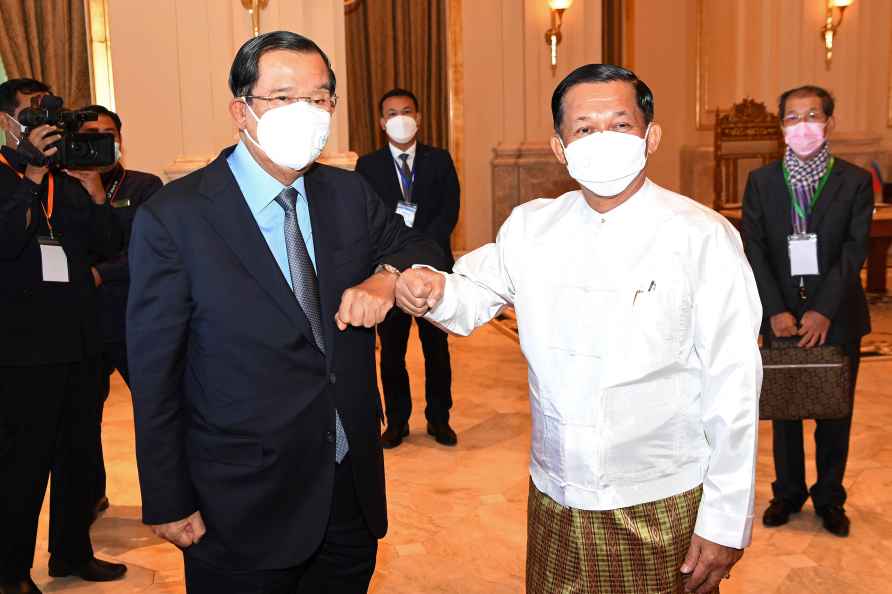 [Naypyitaw: In this photo provided by An Khoun Sam Aun/National Television of Cambodia, Cambodian Prime Minister Hun Sen, left, greets with Myanmar State Administration Council Chairman, Senior General Min Aung Hlaing, right, during a meeting in Naypyitaw, Myanmar, Friday Jan. 7, 2022. Cambodian Prime Minister Hun Sen's visit to Myanmar seeking to revive peace efforts after last year's military takeover has provoked an angry backlash among critics, who say he is legitimizing the army's seizure of power. /PTI] New Delhi, Jan 7 : Condemning the security breach of Prime Minister Narendra Modi during his Punjab visit, the BJP's Other Backward Class (OBC) morcha said that the backward communities across the country will express their anger in the upcoming Assembly elections against the conspirators. Terming the incident a "serious" attempt to endanger Prime Minister's life, national president of BJP OBC morcha Dr K Laxman said: "It is really shameful that Punjab Chief Minister Charanjit Singh Channi did not accept to rise above the dirty and petty politics of the Congress party during Prime Minister Modi's historic visit to Punjab." "From very beginning, Congress is known to conspire against its political rivals but they should not have endangered the life of the Prime Minister. The Congress party shouldn't have resorted to this low level of politics. We strongly condemn the irresponsible behaviour of the Punjab government," he added. National general secretary of BJP OBC morcha Nikhil Anand said that the Congress-led Punjab government failed to provide proper security cover to the Prime Minister. "It was a deliberate attempt. This was a breach of security protocol and also a breach of trust between the Central and state governments by the Congress. It is also against the federal structure of the country," he observed, adding that the backward communities all over the country will express its vengeance in the upcoming Assembly elections. "The OBC society of the country is very angry and worried due to the insult of the Prime Minister and threat to his life in Punjab. The morcha will expose the ill-fated conspiracy of the Congress to sabotage the life of the Prime Minister across the country. Congress has been able to show through its constant antics that it is an anti-OBC party," Anand added. /IANS

Differences in TN Cong over Perarivalan's release
[Sriperumbudur: Congress workers led by CLP leader K Selvaperunthagai stage a protest after the release of A.G. Perarivalan, a convict in the Rajiv Ga

New Delhi, May 19 : In a fresh bid to make users aware about the privacy of their data and take control of their personal and financial information, Apple has introduced a global campaign that will ru […]

San Francisco, May 19 : Google-owned music streaming platform YouTube will now highlight the "most replayed" parts of videos in its web player and mobile apps to let users skip the boring parts. […]