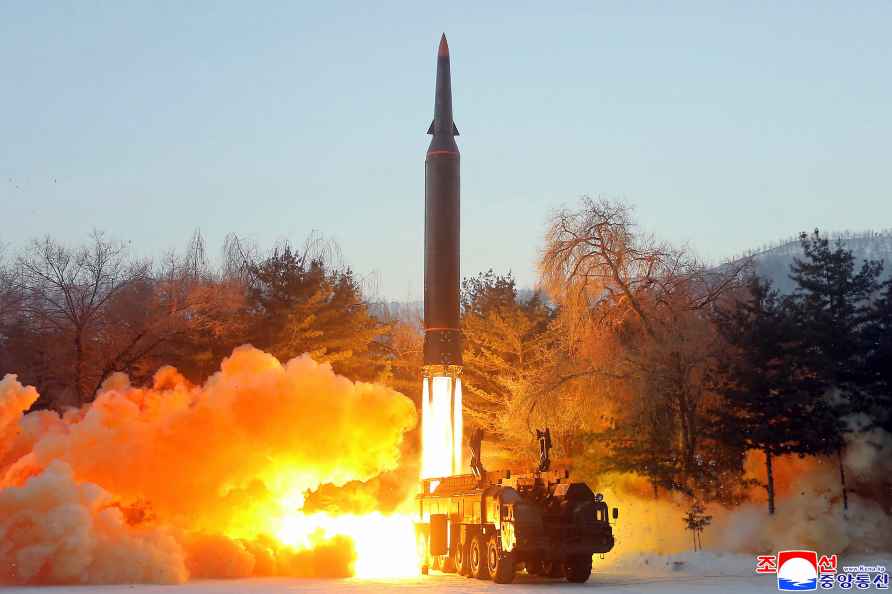 [UNDATED: This photo provided by the North Korean government, shows what it says a test launch of a hypersonic missile in North Korea Wednesday, Jan. 5, 2022. Independent journalists were not given access to cover the event depicted in this image distributed by the North Korean government. The content of this image is as provided and cannot be independently verified. Korean language watermark on image as provided by source reads: "KCNA" which is the abbreviation for Korean Central News Agency. /PTI] Seoul, Jan 6 : North Korea on Thursday announced that it has successfully conducted a test-firing of a hypersonic missile a day earlier, three months after it first showcased the new weapons system. On Wednesday, South Korea's military said the North fired what appeared to be a ballistic missile toward the East Sea from the northern province of Jagang, reports Yonhap News Agency. The missile made a "120 km lateral movement" from the initial launch azimuth and "precisely hit a set target 700 km away", Pyongyang's official Korean Central News Agency (KCNA) said on Thursday but did not disclose the speed of the projectile. North Korean leader Kim Jong-un did not attend the firing. "The test launch clearly demonstrated the control and stability of the hypersonic gliding warhead which combined the multi-stage gliding jump flight and the strong lateral movement," the KCNA said. Hypersonic missiles usually fly at a speed of at least Mach 5, five times the speed of sound or 6,125 km per hour, giving little time for enemies to respond. The North conducted the first test-firing of the "hypersonic" missile Hwasong-8 in September last year, though it's known to have flown at a speed of around Mach 3 at that time. According to photos issued by the KCNA, the shape of the warhead of the missiles fired in September and this week were slightly different, a possible indication the North is developing two different types of hypersonic missiles or has improved the first one. South Korea's Joint Chiefs of Staff said in September the new missile appears to be in the early stages of development and would require "considerable time for actual deployment". The latest firing confirmed the "reliability of fuel ampoule system under the winter weather conditions", the KCNA said, apparently referring to a container of liquid fuel to reduce the preparation time for a missile launch. Compared with conventional missiles that require hours of liquid fuel injection before firing, the ampoule would allow the fuel to be stored for months before immediate use, experts say. The hypersonic missile development is "the most important core task out of the five top priority tasks for the strategic arms sector" under the North's five-year plan, the KCNA said. On Wednesday, South Korea's National Security Council convened an emergency meeting over the missile launch and expressed concerns. The US condemned the latest missile test as a violation of multiple UN Security Council resolutions that poses a "threat" to its neighbours and the international community. /IANS

IPL Turning Point: Pacers make it possible for Mumbai Indians against CSK
Mumbai: Pitches for T20 matches usually favour the batters as the organisers believe that the fans want to see the ball being smacked around for sixe

Explosion in Karachi leaves 13 injured
Islamabad: Thirteen people were injured when a blast went off inside a market area in the capital city Karachi of Pakistan's southern Sindh province,