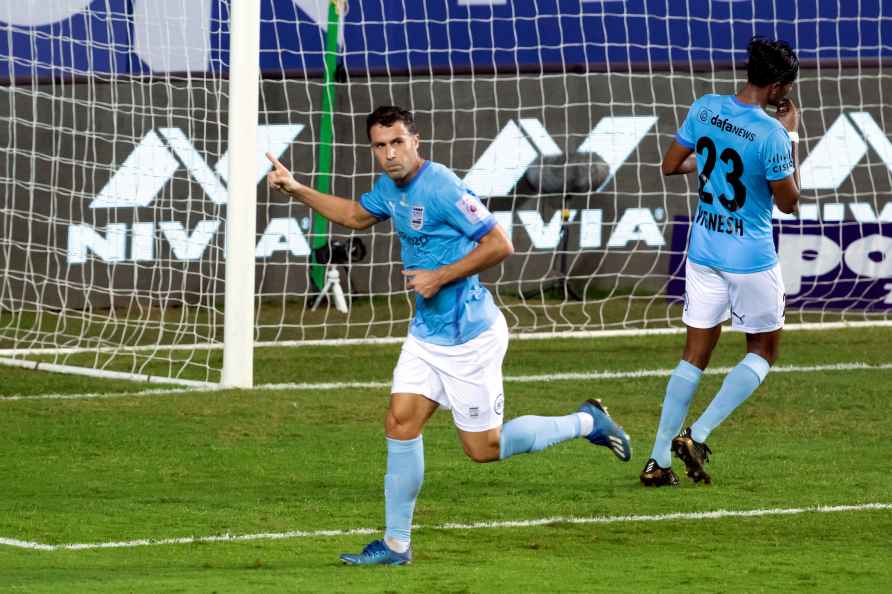 Vasco da Gama (Goa), Jan 3 : Odisha FC registered an impressive 4-2 win over Mumbai City FC in the 2021-22 Indian Super League (ISL) match at the Tilak Maidan Stadium, here on Monday. Odisha FC's Aridai Cabrera (4') scored an early goal against the run of play but Mumbai City's Ahmed Jahouh (11') quickly brought the game on level terms with a superb finish. Igor Angulo (38') then headed his team into the lead before Jerry Mawihmingthanga (70', 77') scored a memorable brace to hand the lead back to the Kalinga Warriors. Jonathas (89') put the result beyond any doubt by scoring the fourth for Odisha FC. The result leaves Des Buckingham's men winless in three games. Victory for Kiko Ram'rez's men means that only three points separate them from the league leaders despite being in seventh place on the table. The match began at a rapid pace as Odisha FC scored an early goal. Mumbai City FC's Mourtada Fall gave the ball away with an unforced error in his own half which led to Aridai Cabrera cutting inside from the left flank and unleashing a curling shot towards the far post. Mohammad Nawaz got both hands on the ball and yet could not prevent the ball from rolling inside the net. A few minutes later, Ahmed Jahouh found the back of the net with a sensational curling shot from almost 25-yards out. The midfielder was fed by Cassio Gabriel with a perfectly weighted pass for the equaliser. Raynier Fernandes had a great opportunity to send his team into the lead at the half-hour mark but the midfielder miscued his header which went wide to his disappointment. However, it was Igor Angulo who finally gave the Islanders the lead with a precise header from a Jahouh free-kick. The second half also started on a fiery note as OFC began on the front foot. Moments after the hour mark, Sahil Tanwar missed an easy header to score the equaliser from 12-yards away after finding himself unmarked inside the box. Ygor Catatau looked to have scored another goal from the bench but he was adjudged to be in an offside position. Within seconds on the other end, Jerry Mawihmingthanga scored his first goal of the season and equalised with a diving header at the far post. The winger then proceeded to score OFC's third and stunned the league leaders with a powerful drive that went straight into the top corner from the right flank. To inflict more misery, Jerry turned provider by delivering a pinpoint cross for Jonathas who calmly placed his shot in the back of the net to score the fourth. A late-headed attempt from Catatau was saved by Kamaljit Singh from point-blank range who showed incredible reflexes to keep the Islanders at bay. The Kalinga Warriors held on to their lead and managed their fourth win of the season. /IANS

Hyderabad, April 28 : Hyderabad has been consolidating its position as the most dynamic scientific centres in Asia and globally, said Telangana's Information and Technology Minister K. T. Rama Rao on […]

New Delhi, April 28 : More than 42 hours after a massive fire broke out at the Bhalswa landfill site in the national capital, the operation to extinguish the blaze was still underway, a Fire Departmen […]