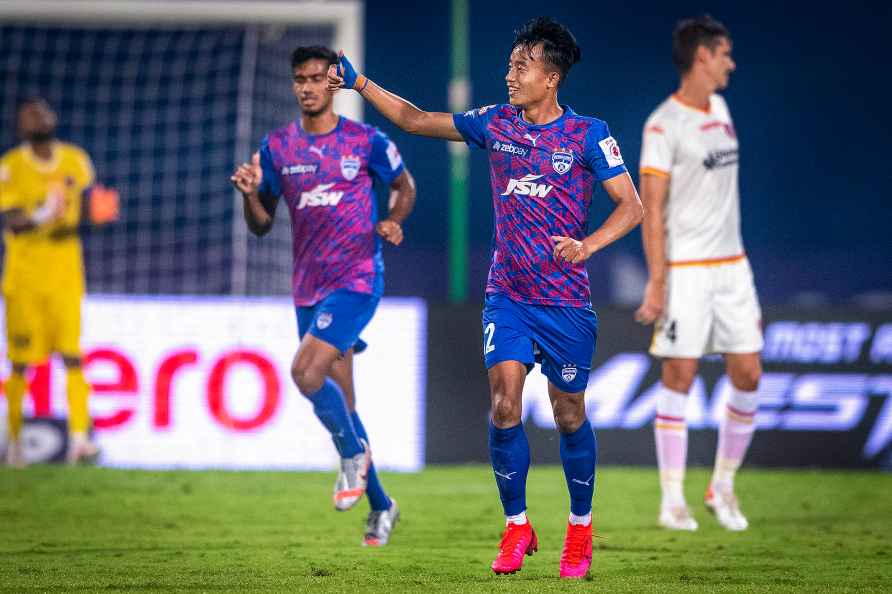 [Goa: Roshan Singh Naorem of Bengaluru FC celebrates a goal during match 49 of season 8 of Indian Super League football tournament between Bengaluru FC and SC East Bengal, at the GMC Athletic Stadium, in Goa, Tuesday, Jan. 4, 2022. (ISL/ /PTI] Fatorda (Goa), Jan 4 : High-flying Hyderabad FC and ATK Mohun Bagan will vie for the top spot when they meet in the 2021-22 Hero Indian Super League match at the Jawaharlal Nehru Stadium, here on Wednesday. Since Juan Ferrando took over from Antonio Lopez Habas, ATKMB have got back to winning ways, extending their run to two games in the last outing against FC Goa. The Mariners are back in the top four with 14 points from eight matches but in Hyderabad, they will face an opponent who are on a seven-game unbeaten run. Placed second in the points table, Hyderabad will go top of the table if they beat ATKMB as they are one point adrift of table-toppers Mumbai City FC having 15 in their kitty from eight matches. Even if the Manolo Marquez-coached side draws, they will go to the top riding with a better goal difference. For ATKMB, the motivation is the same because if they win against Hyderabad, they will also go top of the heap. Mumbai lost to Odisha last night leaving the fight for the top spot open. Juan Ferrando relished the opportunity to potentially taking Bagan to the summit. "All games are important but it is a great opportunity for us and the club because they have been working hard the last two weeks, it is a pleasure for me," he said. "It will be an amazing game. We have similar styles. Hyderabad too likes to play football. They have good players," Ferrando further complimented the opposition. For the 'home' team, Liston Colaco has been in the form of his life. The 23-year old is their best player at the moment and has netted five goals already, making him the highest Indian scorer in the league this season. Liston scored in his second successive game in a 2-1 win over Goa. His performance in the last match saw him awarded the Hero of the Match. It was his second Hero of the Match award in his last two matches. He became the first Indian to win more than one Hero of the Match award this season. In the last match, Liston scored one of the goals of the season and against his old club Hyderabad, there will be no shortage of motivation for the Goa boy. However, Hyderabad have one of the toughest defenses to break down this season. They have conceded seven goals this season, the fewest by a team this season. No other team has conceded fewer than 10 goals this term. Hyderabad have kept only 1 clean sheet so far. However, they have not yet conceded more than one goal in any of the matches they have played. In their last game, Hyderabad recorded their biggest ever in Hero ISL in their 6-1 win over Odisha FC. At the heart of their goalscoring spree has been Bartholomew Ogbeche who scored a brace in the last outing, taking his tally to eight goals in eight games so far. The Nigerian is currently leading in the golden boot race. "He is a great player. He has a lot of experience in a lot of countries, including India, with 4 clubs in 4 seasons. He has scored goals in every team even in Mumbai last season when he was not the first choice. He has 8 goals now, the same which he had at Mumbai last season. He is an important player for us but he also requires the support of the entire team," Marquez commented on Ogbeche's impact. For ATKMB, Roy Krishna has also kept delivering the goods like he always does. With 4 goals and 4 assists in 21-22 Hero ISL, Krishna has consistently delivered this season, having a goal or an assist in six of his last 8 games. /IANS