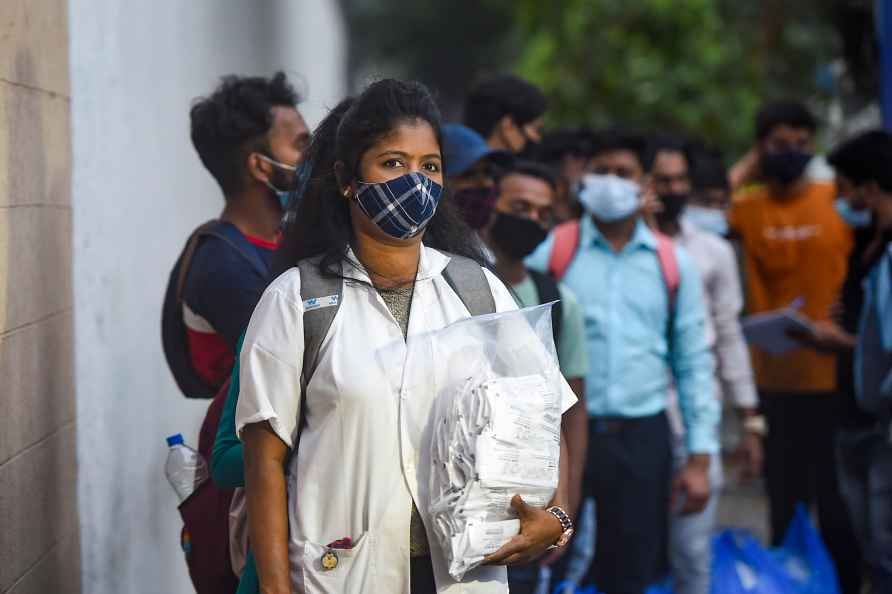 [Mumbai: Health workers wait outside the International Cruise Terminal to take RT-PCR test of the passengers onboard the Cordelia cruise ship, before disembarking at Green Gate, in Mumbai, Tuesday, Jan. 4, 2022. More than 2,000 passengers aboard the ship are stuck on the vessel after 66 crew members tested positive for COVID.( /PTI] Mumbai, Jan 4 : As luxury ship Cordelia Cruise reached Mumbai on Tuesday evening, the company management claimed that only one crew member had tested Covid-19 positive in Goa on Sunday and the guests who were confirmed cases may have been infected before they boarded the ship. It also said that its January 5 cruise has been suspended. As the ship docked at Mumbai's International Cruise Terminal at 6 p.m., BrihanMumbai Municipal Corporation (BMC) health teams waited with five seven-seater ambulances, to handle the passengers. Since 66 guests have detected Covid positive, they will be deboarded immediately and sent to the Richardson and Cruddas Jumbo Covid Centre in Mazagaon or paid hotels. The BMC teams will conduct RTPCR tests on the remaining passengers who will remain on the ship till their test reports are received from two laboratories by Wednesday morning. For all those who test positive, the BMC will take them out through the Green Gate and shunt them to institutional quarantine either at the Richardson and Cruddas, Mazagaon, or in paid hotels, and those who test negative will be hand-stamped for a week's home isolation. Earlier, in a detailed statement, Waterways Leisure Tourism Pvt Ltd CEO and President Jurgen Bailom said that after the sole infected crew member displayed mild symptoms, he was immediately isolated and then all the other crew and guests had to undergo Covid tests again. As Goa Health Minister Visjwajit Rane disclosed, at least 66 persons of the total 1,400 on board were found Covid-19 positive and were isolated leading to on-board protests, though Bailom said they are asymptomatic. He said that the cruiser company has taken all precautions for its crew who are staying on board the ship since September 2021, are fully vaccinated and undergo regular RTPCR tests, and had informed the health authorities concerned after the fresh infections were detected. "Once may hence mindfully arrive at the conjecture that the guests who have tested positive as of this morning (January 4) were already infected with the virus prior to boarding. However their tests showed otherwise, hence they were permitted on board," said Bailom. He said that there are several similar incidents on flights and trains which are "unfortunate and unexpected" despite everyone taking utmost care, and the Cordelia Cruises' "extreme proactiveness" in conducting the RT-PCR tests. Asserting that the luxury shipping company is "compliant" with all regulations of the Directorate General of Shipping, it said that all crew members and guests have to compulsorily undergo a RT-PCR test 48 hours prior to boarding the ship, even if they are fully vaccinated. This is the second time in three months that the Cordelia Cruise is in the limelight after the infamous October 2 raids by Narcotics Control Bureau on a drug party aboard in which celebs like Aryan Khan, son of Bollywood megastar Shah Rukh Khan, were arrested.A /IANS