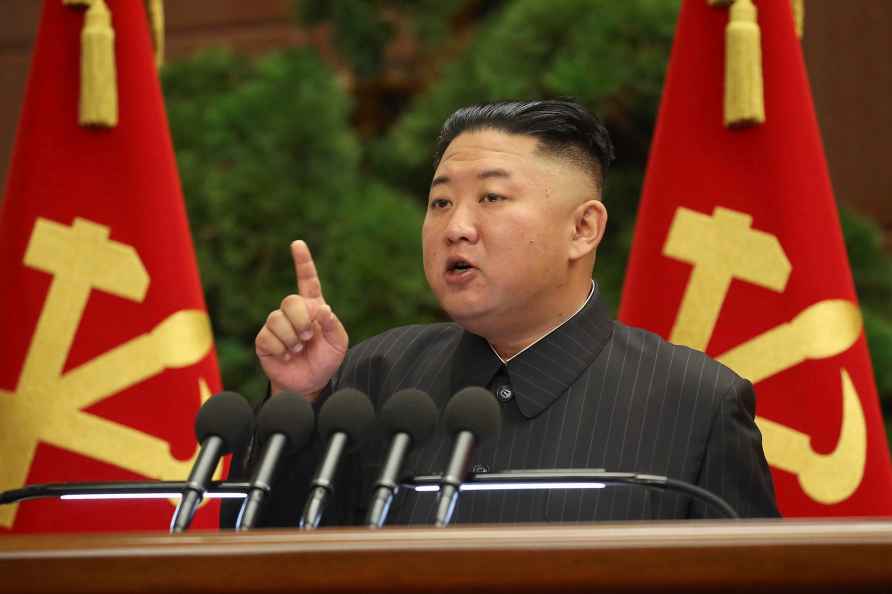 Seoul, Jan 2 : North Korean leader Kim Jong-un visited the mausoleum of his late grandfather and father in his first reported public activity this year, Pyongyang's state media said on Sunday. Kim paid tribute at the Kumsusan Palace of the Sun, where the bodies of state founder and his grandfather Kim Il-sung and his father, Kim Jong-il, are enshrined, on the occasion of the start of the new year, according to Pyongyang's official Korean Central News Agency (KCNA). The visit to the mausoleum came after he unveiled this year's policy priorities on developing the national economy and bolstering anti-virus efforts during a rare five-day meeting of the ruling Workers' Party held until the last day of 2021, reports Yonhap News Agency. The leader's influential sister, Kim Yo-jong, was spotted paying tribute to the statues of the late leaders. Senior party and military officials accompanied Kim Jong-un on his visit to the mausoleum, including Choe Ryong-hae, the country's de facto No. 2 leader, and Jo Yong-won, the leader's close aide, according to the KCNA. Kim Jong-un has paid tribute to the palace on New Year's Day since taking office in late 2011, except in 2018. /IANS

Facts should be allowed to come out: RSS on Gyanvapi mosque issue
New Delhi, May 19 : Amid the ongoing debate over a 'Shivling' allegedly found in the Gyanvapi mosque during a court-mandated videography survey in Var

Unsettled river issues likely to be discussed in JCC in Delhi: Indian envoy to B'desh
By Sumi Khan Dhaka, May 19 : Vikram Doraiswami, the Indian High Commissioner to Bangladesh, held a meeting with Bangladesh Foreign Secretary Masud

US reopens embassy in Ukraine

Washington, May 19 : The US reopened its embassy in Ukraine, Secretary of State Antony Blinken said, three months after it ceased operation in anticipation that Russia would launch a military operatio […]

Pakistani rupee touches 200 against US dollar in open market

Karachi, May 19 : The Pakistani rupee touched a critical threshold of 200 in the open market against the US dollar during intraday trading after shedding Rs 2 on Wednesday, Geo News reported. Me […]

Facts should be allowed to come out: RSS on Gyanvapi mosque issue

New Delhi, May 19 : Amid the ongoing debate over a 'Shivling' allegedly found in the Gyanvapi mosque during a court-mandated videography survey in Varanasi, the Rashtriya Swayamsevak Sangh (RSS) has s […]