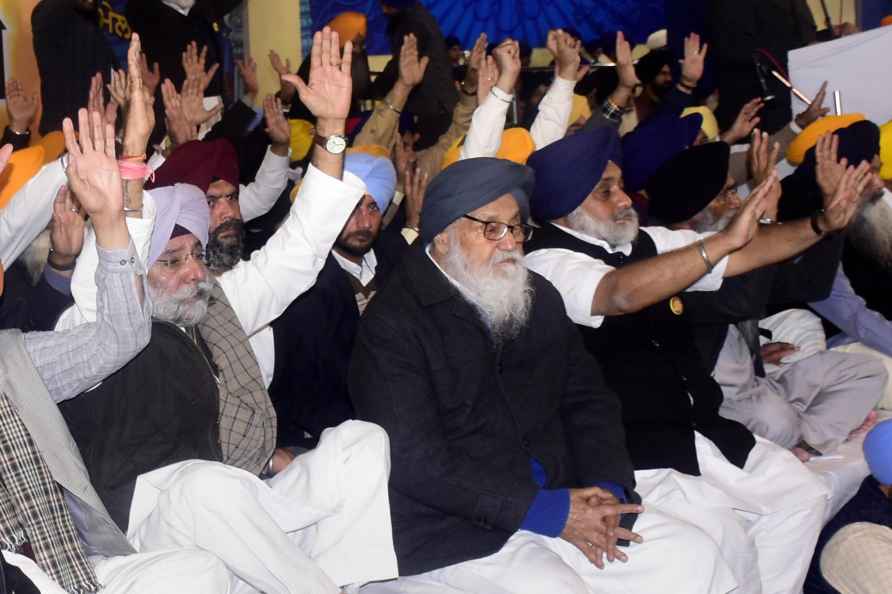 [Amritsar: Former Punjab chief minister Parkash Singh Badal with Shiromani Akali Dal President Sukhbir Singh Badal and party leaders, during 'Panthic Rosh Ikath' to protest against the alleged police inaction in sacrilege cases, in Amritsar, Sunday, January 2, 2022. ( /PTI] Amritsar, Jan 2 : Akali Dal supremo and five-time Punjab Chief Minister, Parkash Singh Badal, on Sunday warned against "dangerous conspiracies" to install "government stooges" in sacred Gurdhams. "Devious conspiracies are at work to weaken the Khalsa Panth and dilute its separate and unique religious identity. Our sacred Gurdhams and their unique religious ideology are being targeted. The 'qaum' (community) will have to guard against attempts by powerful agencies to create dissensions, disunity and mutual distrust within the community." The elder Badal was addressing a Panthic gathering at Manji Sahib Diwan Hall in Sri Harmandar Sahib Complex here to protest the painful incidents of sacrilege, including the outrage at the sanctum sanctorum of Shri Harmandar Sahib. Badal also warned against the "dangerous conspiracy to put Punjab on flames again through communal polarisation". "The hard-earned atmosphere of peace and communal harmony is being put to torch by powers that be. They will finally blame the flames on Punjabis themselves in a repeat of 1980s and 1990s simply to further vested petty political interests," he said during the 'panthic ikath' which demanded a probe into the recent sacrilege incidents by a sitting high court judge. In his remarks, Shiromani Akali Dal (SAD) President Sukhbir Badal said the Congress had done politics on the issue of sacrilege for five years and did nothing to nab those behind this heinous act. He said now again a conspiracy was afoot to spoil the peace of the state and create divisions in society for political motives alone. He said despite nabbing culprits who had committed sacrileges at Sri Anandpur Sahib on September 13 and at Sri Darbar Sahib on December 15, both last year, the government had done nothing to uncover the conspiracy behind the two incidents. He said even in the case of the Sri Harmandar Sahib sacrilege, no attempt was made to identify the accused till now. Asking the people how they could expect justice from the Congress which had rolled tanks and guns into Sri Darbar Sahib and had carried out "genocide" against the Sikh community in 1984, the junior Badal said: "It is of utmost importance to strengthen the 'panth' as well as its representative party -- the SAD." /IANS

Baghdad, May 22 : The Iraqi Health Ministry has said up to 90 cases of viral hemorrhagic fever (VHF) have been registered in Iraq, including 18 deaths. "There has been a serious increase in the […]

Paris, May 22 : A tourist plane crashed near the town of Les Adrets in southeast France, officials said. Five dead bodies, including a child, were discovered at the site of the crash on Saturday […]

Islamabad, May 22 : At the invitation of Chinese State Councilor and Foreign Minister Wang Yi, Pakistani Foreign Minister Bilawal Bhutto Zardari will pay an official visit to China from May 21 to 22, […]

New Delhi, May 22 : A consumer forum in Gurugram has imposed a fine of nearly Rs four lakh on the management of a housing society and its security agency in connection with the lapse of safety that le […]