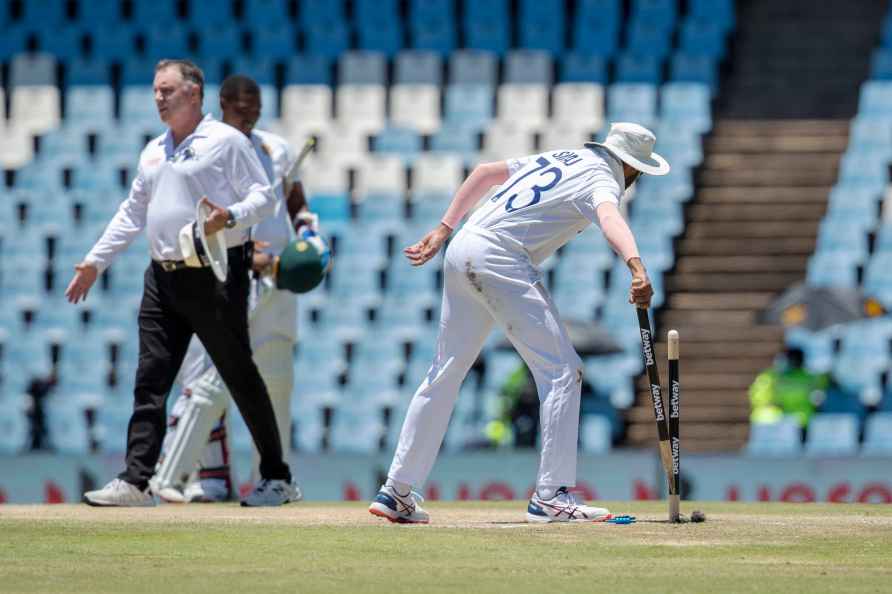 Centurion, Dec 30 : India need just three more wickets to win the first Test against South Africa at the SuperSport Park with Jasprit Bumrah, Mohammed Siraj, and Mohammed Shami taking a wicket each in the first session on day five. At lunch, South Africa are 182/7 in 66 overs with Temba Bavuma (batting at 34) putting up a show of dogged resistance to keep India at bay from breaching Fortress Centurion. Resuming from 94/4 at stumps under a clear bright sky, Bavuma and Dean Elgar struck crisply-timed boundaries to keep India frustrated. Mohammed Shami dropped Elgar on 63 in a straightforward chance off his own bowling, further extending the wait of a breakthrough for the tourists. Shami's dropped chance cost India only 14 runs as the 36-run partnership was brought to an end by Jasprit Bumrah trapping Elgar plumb lbw. The left-handed batter shuffled in an attempt to flick but missed the in-ducker from Bumrah which crashed to his pads. He went for the review, but replays showed the ball hitting the stumps. Quinton de Kock smashed some boundaries while sharing a stand of 31 with Bavuma before chopping onto his stumps while trying to cut off Siraj. Shami struck in his second spell of the session, getting a length ball to straighten after pitching and take a faint outer edge of Wiaan Mulder's bat to keeper Rishabh Pant. Bavuma lost partners but continued to hit boundaries. Along with Marco Jansen, Bavuma ensured that South Africa didn't lose any other wicket till lunch arrived. Brief scores: India 327 in 105.3 overs and 174 in 50.3 overs (Rishabh Pant 34; Kagiso Rabada 4/42,) against South Africa 197 in 62.3 overs and 182/7 in 66 overs (Dean Elgar 77, Temba Bavuma 34 not out, Jasprit Bumrah 3/50, Mohammed Siraj 2/47), South Africa need 127 runs to win. /IANS