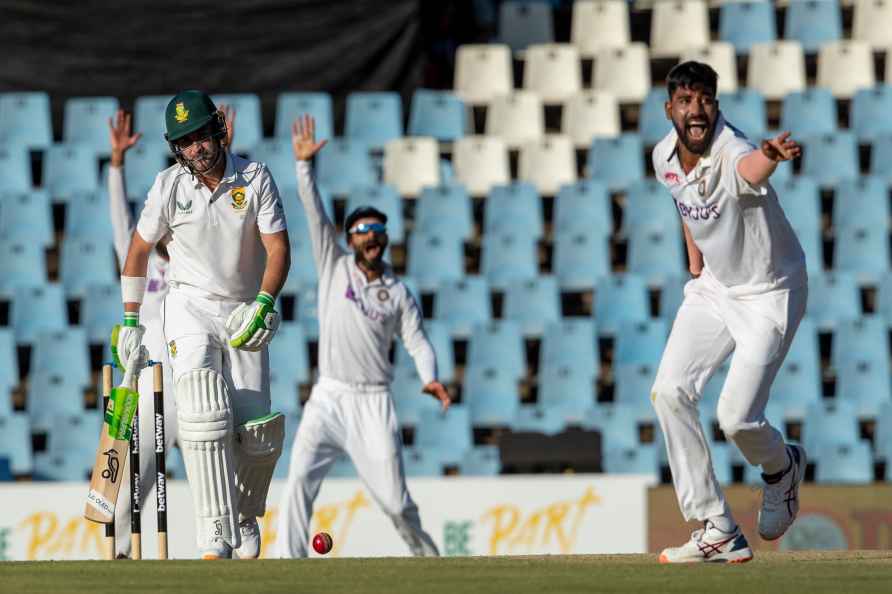 [Pretoria: South Africa's captain Dean Elgar, left, watches on as India's bowler Mohammed Siraj and teammates appeal unsuccessfully for his dismissal, during the fourth day of the Test Cricket match between South Africa and India at Centurion Park in Pretoria, South Africa, Wednesday, Dec. 29, 2021. /PTI] Centurion, Dec 29 : Kagiso Rabada and Marco Jansen took four wickets each as India were bowled out for 174 in the second innings on day four of first Test at SuperSport Park here on Wednesday. India have now set a target of 305 for South Africa with 51 overs left in the day. The pitch is still quick and high levels of variable bounce looming as a large factor. Wicketkeeper-batter Rishabh Pant's quick knock of 34 was the top score of India's innings while Rabada and Jansen took figures of 4/42 and 4/55 respectively. Virat Kohli fell on the first ball after lunch, playing a loose drive to a wide outside the off-stump delivery and edged behind to keeper Quinton de Kock. This was the second time in the match that Kohli had driven and nicked behind. The Indian captain could only smash his pad with the bat while going back to the pavilion, with 2021 being the second successive year that Kohli didn't score a century. Cheteshwar Pujara could add a boundary to his score from lunch before being strangled down leg by Lungi Ngidi for a simple catch to de Kock behind. Ajinkya Rahane slammed Marco Jansen for three boundaries: a square drive through point, followed by a hooked six over backward square leg and a crisply-timed cover drive to accelerate India's lead. But in an attempt to repeat the hook in Jansen's next over, Rahane fell with the top-edge flying to Rassie van der Dussen at deep square leg. Rishabh Pant and Ravichandran Ashwin hit a flurry of eye-catchy boundaries while sharing a stand of 35 runs for the seventh wicket, including the latter changing a caught behind decision off Rabada. But Rabada in his next over, bounced out Ashwin as the ball took the glove edge to Keegan Petersen at gully. Pant continued to take the attack to South Africa, whipping Mulder for successive boundaries before pulling Rabada through mid-wicket. But on the next ball, Rabada had the last laugh as a confused Pant toe-ended the pull to mid-on, but had done his job to boost India's lead. Rabada then picked his fourth wicket of the innings as Mohammed Shami was caught by Mulder at third slip. Jasprit Bumrah dabbed through gully to take the lead past 300 before Jansen bowled Mohammed Siraj for duck to end India's second innings at 174. Earlier, nightwatchman Shardul Thakur had a nervy time in the first session. He left balls outside the off-stump and even survived an lbw chance off Jansen (DRS showed going over the stumps). Thakur fought back by flaying a powerful upper-cut over backward point off Jansen. But Rabada got one to kick off from a length to take the outer edge of Thakur's bat to Mulder at third slip. Pujara avoided a pair with a drive through mid-on off Ngidi. But on the fourth ball from the pacer, Pujara chipped to mid-wicket, where Rabada dropped a simple catch. Rahul, who picked easy leg-side boundaries while being cautious, chased a wide ball from Ngidi and edged to Dean Elgar at first slip. Pujara looked good at the crease and pounced on width from Mulder with a cracking cut through off-side. Kohli, on the other hand, wristed flicks and glances off Ngidi and Mulder before hitting Rabada twice for boundaries through point, taking India to safety till lunch. Post lunch, India lost seven wickets in 18 overs but added 95 runs to set a daunting target for South Africa. Brief scores: India 327 in 105.3 overs and 174 in 50.3 overs (Rishabh Pant 34, KL Rahul 23; Kagiso Rabada 4/42, Marco Jansen 4/55) against South Africa 197 all out in 62.3 overs, South Africa need 305 runs to win. /IANS