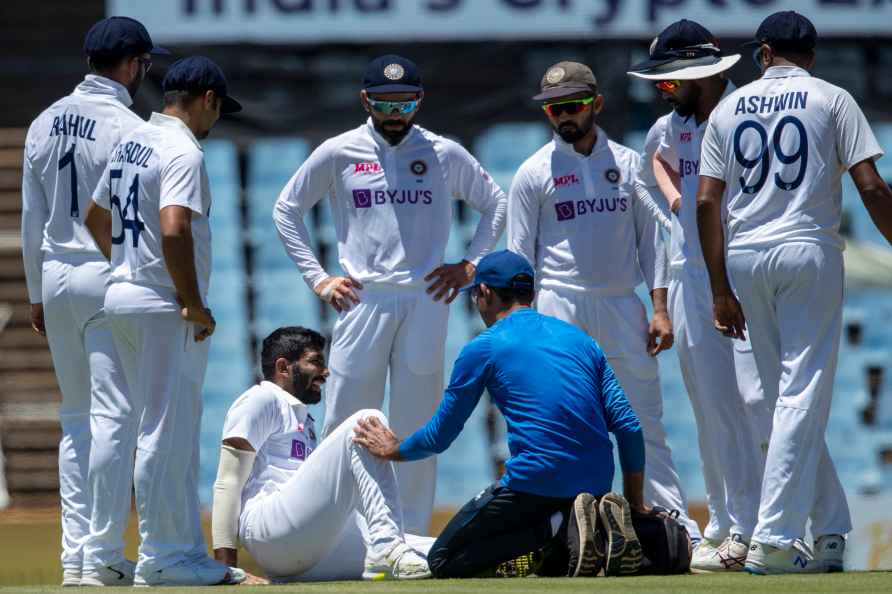 [Pretoria: India's bowler Jasprit Bumrah, bottom left, is attended by team physio Nitin Patel after hearting his ankle, during the third day of the Test Cricket match between South Africa and India at Centurion Park in Pretoria, South Africa, Tuesday, Dec. 28, 2021. /PTI] Centurion, Dec 28 : South Africa were 21 for 1 at lunch, after bowling out India for 327 in their first innings on the third day of the first Test of the three-match series, at SuperSport Park, here on Tuesday. After triggering India's batting collapse, South Africa also didn't have a great start as Jasprit Bumrah dismissed the Proteas captain Dean Elgar in the very first over of the hosts' innings. However, Keegan Petersen (11 not out) and Aiden Markram (9 not out) denied Indian bowlers any other wicket till lunch, as Proteas were trailing by 306 runs at the end of first session. Earlier, resuming the day at 272/3, Proteas pacers -- Lungi Ngidi (6/71), Kagiso Rabada (3/72) -- used the bounce and lateral movement to perfection and rattled the Indian batting attack, dismissing visitors under a below-par total. The Indian team could only add 55 runs to their overnight score and lost seven wickets quickly in the morning session. KL Rahul (123 off 260), who looked in fine touch on Day 1, was the first one to get dismissed. The opener tried to play a swivel pull off Rabada but he gloved the ball and keeper Quinton de Kock took an easy catch. Next was Ajinkya Rahane (48 off 102), who tried to play a cut shot off Ngidi, but was only able to give a catch to the wicketkeeper. Thereafter, the likes of Rishabh Pant (8), Ravichandran Ashwin (4), Shardul Thakur (4) and Md Shami (8) got out in quick succession. The last-wicket partnership of 19 runs between Jasprit Bumrah (14) and Md Siraj (4) gave some late flourish to Indian innings. Earlier, the second day of the ongoing Test was washed out without a ball being bowled on Monday. Brief scores: India 1st Innings 327 in 105.3 overs (KL Rahul 123, Ajinkya Rahane 48; Lungi Ngidi 6/71, Kagiso Rabada 3/72) vs South Africa 1st Innings 21/1 in 7 overs (Keegan Petersen 11 not out, Aiden Markram 9 not out; Jasprit Bumrah 1/12). /IANS

Violence rocks Andhra town over renaming district after Ambedkar
Amaravati, May 25 : Violence rocked Andhra Pradesh's Amalapuram town on Tuesday as a mob protesting against the government's move to rename Konaseema

J&K cop killed, daughter injured in militant attack
[Srinagar: Locals gather at the spot of a militant attack on the policeman Saifullah Qadri, at Soura area in Srinagar, Tuesday, May 24, 2022. Qadri la

Budapest, May 25 : Hungary's Parliament has amended the country's constitution to enable the government to introduce a special legal order and declare a state of emergency in case of an armed conflict […]

New Delhi, May 25 : The Central Bureau of Investigation (CBI) has summoned Karti Chidambaram to join the probe in connection with a fresh case lodged against him and others for allegedly helping Chine […]

Berlin, May 25 : The German Standing Committee on Vaccination (STIKO) at the Robert Koch Institute (RKI) has extended its general Covid-19 vaccination recommendation to children between the ages of 5 […]

Patna, May 25 : The Bihar government has decided to hold an all-party meeting on the issue of caste-based census on June 1 in Patna. Vijay Kumar Chaudhary, the Education Minister of Bihar has co […]