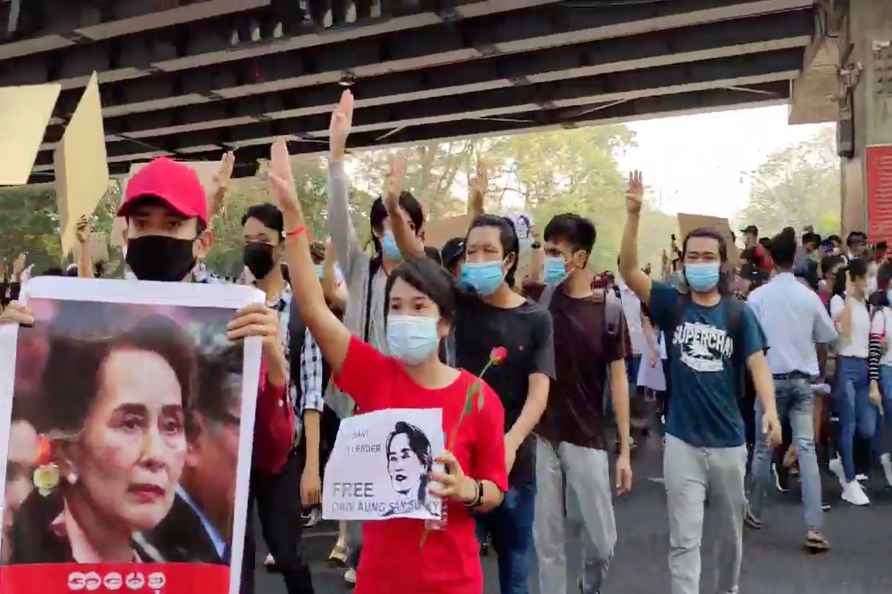 Nay Pyi Taw, Dec 7 : The four-year jail sentences of Aung San Suu Kyi, the former de facto leader of Myanmar who was ousted during the February 1 military coup, as well as deposed President Win Myint have been halved by two years by the ruling military regime. According to a state media report, Win Myint and Suu Kyi will continue being held at the current undisclosed locations, reports Xinhua news agency. The two ousted leaders were sentenced to four years in prison on Monday morning after they were found guilty on charges of "inciting dissent and breaking Covid rules" under thr Natural Disaster Management Law. Suu Kyi, the 76-year-old former State Councillor, faces a total of 11 charges, such as violating the Official Secrets Act. She has denied them all. Following the coup which toppled her National League for Democracy (NLD) government, she has been under house arrest in an undisclosed location. The coup was staged after the military alleged massive voting fraud in the November 2020 general elections, which saw the NLD win a majority of seats in both houses of Parliament. The party also won an absolute majority in the 2015 general elections and had been running the government since 2016. The five-year term of the elected government was expected to end in March 2021. After Suu Kyi and Win Myint were detained along with other NLD officials following the military takeover, the state power of Myanmar was transferred to Commander-in-Chief of Defense Services Sen-Gen Min Aung Hlaing after the declaration of an emergency. The coup triggered widespread demonstrations and Myanmar's military has cracked down on pro-democracy protesters, activists and journalists, according to rights groups. Suu Kyi is one of more than 10,600 people to have been arrested by the junta since February, and at least 1,303 others killed in the demonstrations, according to the monitoring group Assistance Association for Political Prisoners. /IANS

'In national interest..': SC for start of counselling, reserves order on EWS quota in NEET-PG admissions
New Delhi, Jan 6 : After conducting a day-long hearing on petitions challenging the validity of EWS quota in postgraduate medical admissions and the C

Over Rs 6,000 cr allocated to Rajasthan under Jal Jeevan Mission
New Delhi, Jan 6 : Drinking water supply schemes worth Rs 6,872.28 crore have been approved for Rajasthan which is providing tap water to 22.23 lakh (

BJP leaders, CMs hold prayers across country for PM's well-being
New Delhi, Jan 6 : Senior BJP leaders, including Chief Ministers of party-ruled states, held prayers at temples across the country on Thursday for the