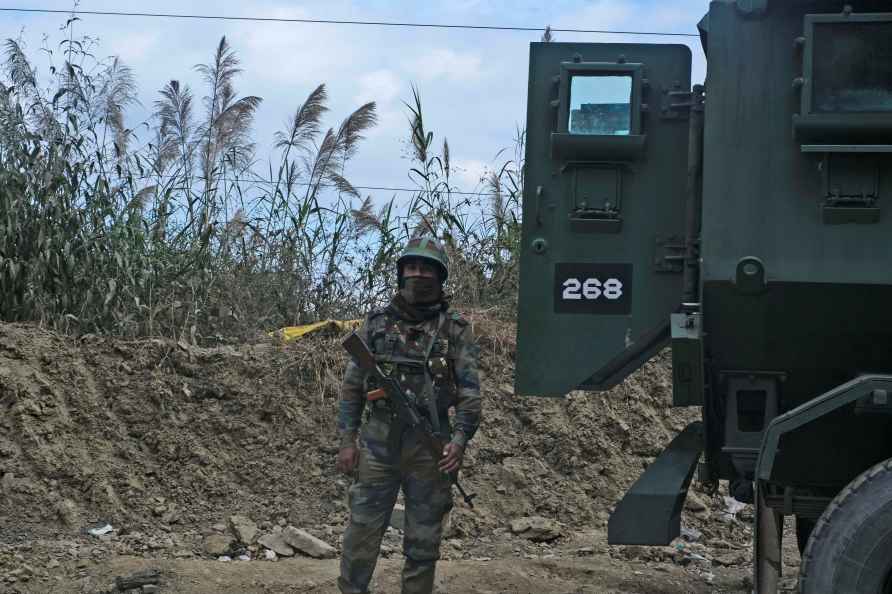 [Kohima : An Indian army soldier stands guard on a highway on the outskirts of Kohima, capital of northeastern Nagaland state, India, Sunday, Dec. 5, 2021. Angry villagers burned army vehicles in protest after more than a dozen people were killed by Indian army soldiers who mistakenly believed some of them were militants in Nagaland state, along the border with Myanmar, about 300 kilometers (186 miles) from here. Nagaland state.......s top elected official ordered a probe into the killings, which occurred on Saturday. /PTI] Kohima, Dec 5 : At least 13 people, all coal miners, and a soldier were killed and 11 injured in an unfortunate incident of "mistaken identity" in Mon District of Nagaland, sources said on Sunday. The leaders of various Naga organisations, including Konyak Hoho, claimed that 13 civilians were killed when the security forces fired on them due to "mistaken identity" and two more were reported missing after the Saturday evening incident on the Tiru-Oting road. According to the Naga organisation leaders, who refused to be identified, 11 other civilians were injured. The incident took place when the victims, who were daily wagers, were returning home from a coal mine in a pick-up van. Villagers said that the security personnel are believed to have mistaken the victims as members of the National Socialist Council of Nagaland (Khaplang-Yung Aung) and fired on them. Angry locals attacked the security forces and damaged their vehicles. Defence sources said that the security forces have suffered severe injuries in the incident, including one soldier who succumbed to the injuries. A brief statement of the Army said that based on credible intelligence of likely movement of insurgents, a specific operation was planned to be conducted in the area of Tiru under Mon District. "The incident and its aftermath is deeply regretted. The cause of the unfortunate loss of lives is being investigated at the highest level and appropriate action will be taken as per the course of law," the statement said. Nagaland police are yet to provide details of the incident. Nagaland Chief Minister Neiphiu Rio has ordered for a high-level probe by a Special Investigation Team. "The unfortunate incident leading to killing of civilians at Oting, Mon is highly condemnable. Condolences to the bereaved families and speedy recovery of those injured. High-level SIT will investigate and justice delivered as per the law of the land. Appeal for peace from all sections," the Chief Minister tweeted. Earlier in the day, Union Home Minister Amit Shah also condemned the killings. He said, "I express my deepest condolences to the families of those who have lost their lives." Shah said a high-level Special Investigation Team has been constituted by the state government and it will "thoroughly probe this incident to ensure justice to the bereaved families." /IANS

New Delhi, Jan 3 : Prime Minister Narendra Modi will visit Ferozepur, Punjab on January, 5 and will lay the foundation stone of multiple development projects worth more than Rs 42,750 crore. These pro […]

Every breath you take is a new opportunity to make your lives better: Mamta Mohandas

Chennai, Jan 3 : Actress Mamta Mohandas, a cancer survivor whose fight against the disease has inspired many, on Monday told fans and followers that every breath that they take is a new opportunity to […]

'Spider-Man' perched at No. 3 spot among all Hollywood films released in India

Mumbai, Jan 3 : In just 18 days since its theatrical release, 'Spider-Man: No Way Home', with Tom Holland and Zendaya playing the lead roles, has become the third highest grosser among Hollywood films […]

Johannesburg, Jan 3 : Ravichandran Ashwin and Rishabh Pant are on a rebuilding job for India after South Africa made further inroads into the batting order in the second session of the second Test at […]