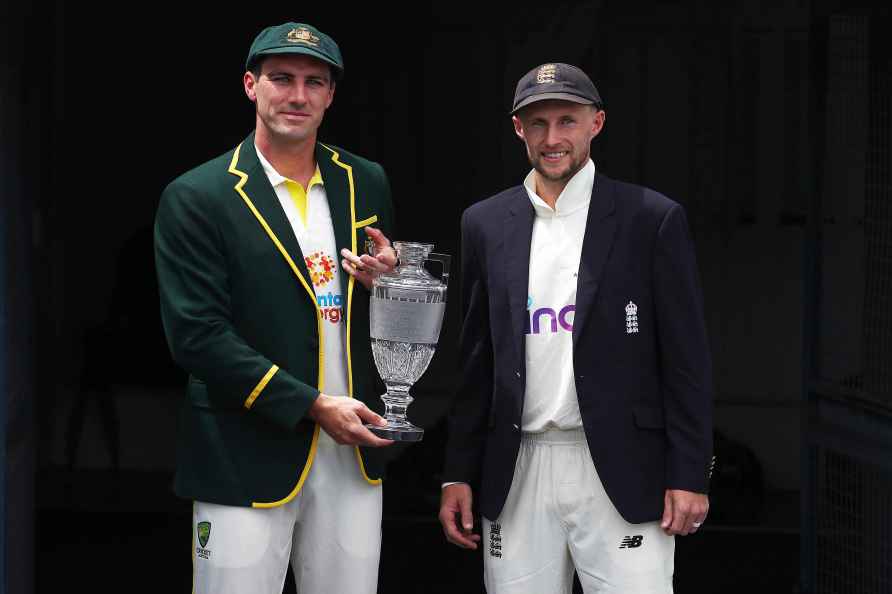 [Brisbane: Australian captain Pat Cummins, left, and England captain Joe Root pose with the Ashes trophy at the Gabba cricket ground ahead of the first Ashes cricket test in Brisbane, Australia, Sunday, Dec. 5, 2021. ( /PTI] Brisbane, Dec 5 : Australia's new Test captain Pat Cummins put a lid on the speculation over whether Mitchell Starc would be in the side for the Ashes or not, confirming on Sunday that the 31-year-old left-arm fast bowler will be in the playing XI for The Gabba Test beginning on December 8. Cummins, who replaced Tim Paine as skipper recently, also confirmed during the official launch of the Ashes series that Travis Head would bat at number five. While Cummins confirmed his playing XI, England skipper Joe Root said he would announce his team for the Brisbane opener after looking at the pitch. "We've got all the options on the table (but) we're not going to name a team just yet," Root was quoted as saying by sen.com.au. "We'll have to see the closer forecast and how that pitch changes over the next couple of days. But it's a great place to play spin. It's something we'll weigh up and consider, but we're not in a position to make that call right now." Australia's confirmed Ashes XI: David Warner, Marcus Harris, Marnus Labuschagne, Steve Smith, Travis Head, Cameron Green, Alex Carey (wk), Pat Cummins (c), Mitchell Starc, Nathan Lyon, Josh Hazlewood. /IANS

Covid testing pushes Australian healthcare system to brink
[Mumbai: A private bus comes out of the International Cruise Terminal after picking up the passengers from the Cordelia cruise ship anchored at the te

After security breach, PM Modi cancels Ferozepur visit
[** EDS: IMAGE POSTED BY @blsanthosh** Ferozepur: Prime Minister Narendra Modi's convoy stuck on a flyover as the road was blocked by a group of prote

New Delhi, Jan 5 : Oil marketing companies have kept the prices of diesel and petrol unchanged across the major Indian cities since November 3, 2021, when the Centre and some states reduced duties on […]

New Delhi, Jan 5 : For winning the third election in a row in the state, the Goa BJP has started presenting a report card of state government to people. The party workers are visiting every hous […]

Beijing, Jan 5 : Chinese President Xi Jinping has signed a mobilisation order for the training of the armed forces, the first order of the Central Military Commission (CMC) in 2022. Xi, who is a […]

Las Vegas, Jan 5 : Chip-maker Qualcomm and Microsoft have partnered to accelerate the adoption of augmented reality (AR) in both the consumer and enterprise sector, as the buzz around Metaverse grows […]