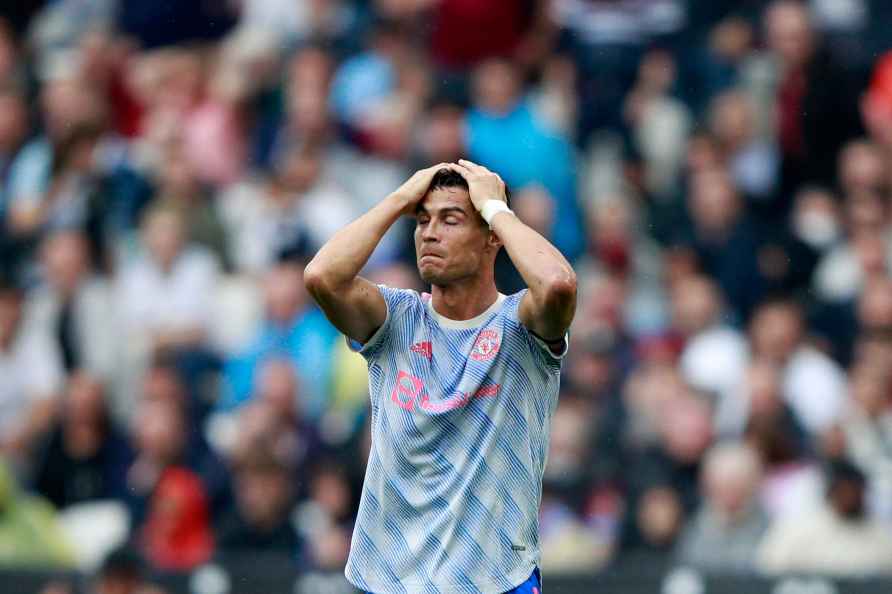 London, Dec 3 : Star Portuguese and Manchester United footballer Cristiano Ronaldo has become the first player in history to notch 800 top-level career goals as he scored twice to guide his club to a 3-2 win over Arsenal in a Premier League match late on Thursday night. With his performance, the 36-year-old now has a total of 801 goals from 1,097 games and looks good to score at a prolific rate as always, given that he has already notched up 12 goals in 17 appearances in all competitions since re-joining the English club from Serie A side Juventus this summer. But despite the striker's superb showing this season, the club continues to languish at joint seventh spot on the Premiership table with just 21 points -- six wins, three draws and five defeats in 14 games. Chelsea are the leaders with 33 points, while Pep Guardiola's Manchester City are second with 32 points. In fact, if one adds Liverpool -- who are on 31 points -- as well, the top three are so closely bunched that the title fight would probably be a three-horse race. But with Ronaldo showing no signs of ageing -- and his relentless pursuit of goals showing no sign of ebbing -- Man United under their new coach, Ralf Rangnick, could be a transformed unit. It was following a string of poor performances, especially the defeat to relegation-threatened Watford recently, that the club decided to sack Ole Gunnar Solskjaer as manager, ending a three-year association with him. While critics said that the Portuguese star's style of play might not suit the pressing approach of Rangnick, he proved them wrong by scoring a brace on Thursday, one of them from the dreaded spot. Emil Smith Rowe scored the opening goal for the Gunners in the 13th minute, but Bruno Fernandez cancelled it out a minute before half-time. Ronaldo struck his 800th goal in the 52 minute, much to the delight of the teammates, who mobbed him, and new manager Rangnick. And, while Martin Odegaard scored the equaliser for Arsenal two minutes later, Ronaldo scored his 801st goal from a penalty to pile on the Gunners' misery. With the side still having a lot of catching up to do, Ronaldo, though excited about the landmark achieved, tweeted, "Our minds are already set on the next game, there's no time to celebrate! Today's win was very important to get back on track, but there's still a long road to go until we reach our destinationÂ? Congrats to all my teammates, great spirit tonight! (Folded hands, Flexed biceps symbols)." With the two goals on Thursday, Ronaldo now has scored a total of 130 goals across two stints for Manchester United. He has scored five for Sporting Lisbon, 450 for Spanish giants Real Madrid, 101 for Serie A top side Juventus and 115 for Portugal. Ronaldo is also the all-time highest scorer in men's international football, in the UEFA Champions League and for Real Madrid. Premier League great Alan Shearer said on Amazon Prime after watching Ronaldo in action on Thursday that, "You just have to sit there and say 'wow' and applaud the guy. It is his determination. It is very difficult to get to the top but it is staying there too. You have to get up in the morning and go again and the whole world is looking for you to perform every week. It is just phenomenal what he has done." The strikers team-mate, Fernandes, who scored the equaliser in the 44th minute on Thursday, was quoted as saying by bbc.com that, "We all know he is improving game by game, year by year. He wants to keep being the best and that's what he did. He knows how to self-motivate." While there is no official database to establish the all-time top scorers, Ronaldo certainly is right up there if one goes by the official games. According to the Football Association of the Czech Republic, Josef Bican -- who played in erstwhile Czechoslovakia and Austria -- scored 821 goals in official games, but many of those goals came for reserve teams and in non-official international games. Even Brazilian legends Pele and Romario claim 1,000-plus goals apiece, but many of the matches were friendlies, which brings down the numbers to 700-plus goals each. Ronaldo's contemporary, Lionel Messi, who has bagged the Ballon d'Or a record seven times, has 756 top-level career goals -- Argentina (80), Spanish side Barcelona (672) and French side Paris St-Germain (4). /IANS

Srinagar, Jan 5 : One terrorist has been killed in an ongoing encounter with the security forces at the Chandgam area in South Kashmir's Pulwama district, officials said on Wednesday. "One terro […]

UP bizman death case: CBI fails to find the motive

Kanpur (Uttar Pradesh), Jan 5 : The Central Bureau of Investigation (CBI) team probing the mysterious death of Kanpur businessman Manish Gupta at a hotel in Gorakhpur during a police raid, have not fo […]

Mathura, Jan 5 : Saints and seers in Mathura have assured victory with a record margin for Chief Minister Yogi Adityanath if the BJP decides to field him from here in the upcoming state Assembly elect […]

Mumbai, Jan 5 : Veteran advertising and theatre personality Burjor Patel, passed away here on Tuesday, his family announced. He was 91 and the end came mainly due to old age. Patel was the […]