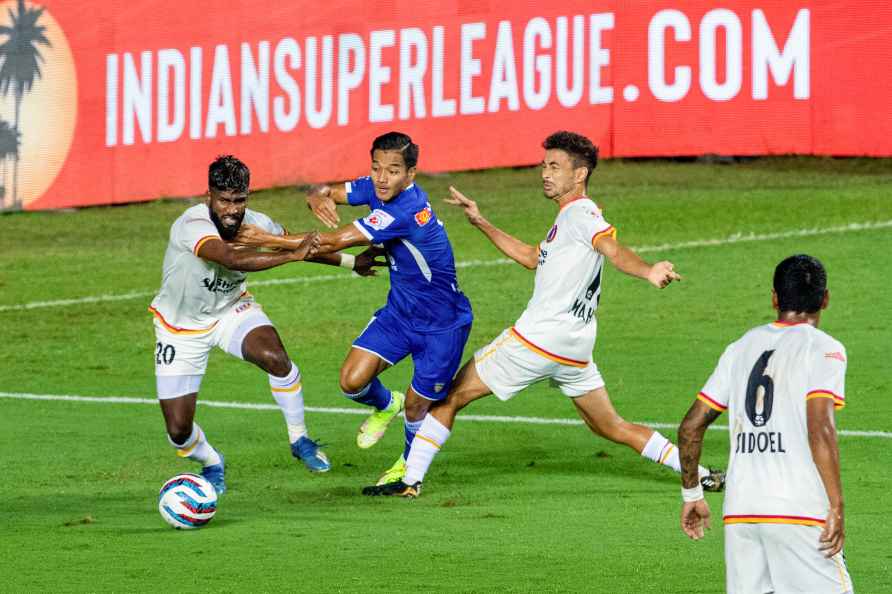 [Goa: Lallianzuala Chhangte of Chennaiyin FC tries to get past the defense during match 16 of season 8 of Indian Super League played between Chennaiyin FC and SC East Bengal, at the Tilak Maidan Stadium, Goa, Friday, Dec. 3, 2021. ( /PTI] Vasco da Gama (Goa), Dec 3 : A winless SC East Bengal will take on two-time champions Chennaiyin FC, hoping for a reversal of fortune when the Indian Super League (ISL) game is played at the Tilak Maidan Stadium here later on Friday. Chennaiyin FC have been off to a flying start in the current edition of the ISL, logging full points in the two matches they have played this season, and only Odisha FC is the other team who have a similar perfect record. On the other hand, the Kolkata giants have conceded 10 goals in the campaign so far, having struggled since their draw against Jamshedpur FC in the opening match. In the following matches, they lost to last edition's runners-up ATK Mohun 3-0 and had 4-6 verdict against Odisha FC. Chennaiyin FC seem to have found the right balance under their new coach Bozidar Bandovic, with the team defeating Hyderabad FC 1-0 and then getting the better of NorthEast United FC (NEUFC) 2-1. Their captain Anirudh Thapa has played a key role in their dominating start, with the hard-working midfielder scoring a goal as well in the win over NEUFC. Thapa has been one of the most important players for CFC over the years. Now, with the captain's armband, he would be a leader in the dressing room. Chennaiyin FC's 32-year-old attacking midfielder from Hungary, Vladimir Koman has been the source of creativity for the side, scoring the winner in the first match and creating five chances in the second fixture. For SC East Bengal, Nigerian Daniel Chukwu can bring about a change in fortunes. The striker scored a brace and had four shots at goal in the 30 minutes cameo role in the losing 4-6 verdict against Odisha FC. Having sat on the bench in the first two games, the Nigerian has made a strong case for his return to the starting lineup. The 30-year-old has more than 100 appearances for FK Molde, which makes him vital to SC East Bengal's performance this season. In the official pre-match conference, coach Manolo DíazDiaz said that Arindam Bhattacharja and Jackichand Singh are still recovering and was not sure when the two would be able to return. The two times these sides played last season, the matches ended in draws. /IANS

Am ashamed, I have to hang my head in shame: Kerala Guv on denial of honouring Prez

Thiruvananthapuram, Jan 10 : The ongoing tiff between Governor Arif Mohammed Khan and Pinarayi Vijayan-led state government over the denial of giving the Honorary D.Litt to President of India took a t […]