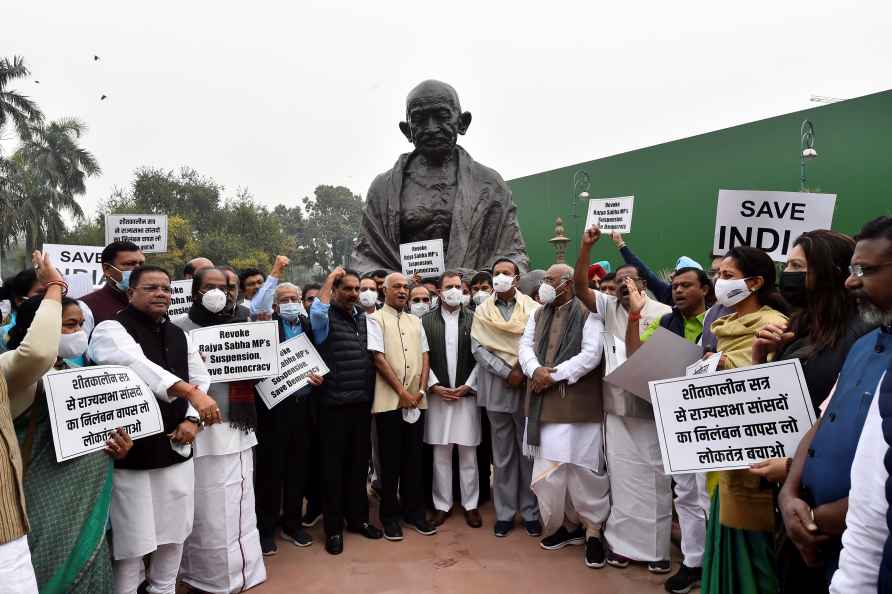 [New Delhi: Congress MP Rahul Gandhi with other opposition parties' MPs at a protest near Mahatma Gandhi's statue over suspension of 12 Rajya Sabha MPs, during the Winter Session of Parliament, in New Delhi, Wednesday, Dec 1, 2021. ( /PTI] New Delhi, Dec 1 : The Rajya Sabha was adjourned till 12 after the opposition resorted to sloganeering on the issue of suspension of the 12 MPs. The Chairman M. Venkaiah Naidu said that the MPs suspended had no remorse for their conduct and the government was also insisting on an apology by the suspended members. Earlier, the opposition members protested at the Gandhi Statue in the Parliament premises on the suspension issue. On Tuesday, the proceedings of the Rajya Sabha were adjourned for the day after Deputy Chairman Harivansh Narayan Singh adjourned the House in the absence of the Opposition. Parliamentary Affairs Minister Pralhad Joshi said: "Ours is a Democratic government and our leader is also very democratic so we do not want to run the House without the Opposition. They have boycotted it for a day so let them come back tomorrow and we can take up the Bills. The government is open to constructive criticism." Leader of the House, Piyush Goyal slammed the Opposition and justified the Chair's decision and recounted the series of events that led to suspensions. "The action was needed to protect the sanctity of the House as a section of the Opposition MPs had created ruckus, attacked women marshals and tried to vandalise the House during the last Monsoon session." Naidu, on Tuesday, turned down the Opposition's appeal for revocation of suspension. "I am not considering the appeal of Leader of Opposition Mallikarjun Kharge to revoke suspension of 12 MPs till the errant Members apologise for their misconduct and the House functions smoothly," he observed. At this, the opposition members staged a walk-out. Kharge had raised the issue under rule 256 saying that the suspension was contrary to rules of the House. "The Members have been suspended over a conduct which occurred in the previous session and is against the rules of the House," the LoP said, adding that the question of apologising does not arise. /IANS

Europe turning a new page between 2021 and 2022
[Grohnde:Steam rises from the cooling towers of the Grohnde nuclear power plant near Grohnde, Germany, Wednesday, Dec. 29, 2021. Germany on Friday, De

Lara Dutta loved the opportunity of working with Naseeruddin Shah

Mumbai, Dec 30 : Actress Lara Dutta is over the moon on sharing the screen with veteran star Naseeruddin Shah in the series 'Kaun Banegi Shikharwati'. She says the actor was on her wishlist for the lo […]

Kolkata, Dec 30 : In the midst of the Omicron scare in West Bengal that recorded 11 cases in five days, the upward graph of Covid-19 infections is keeping the state health department on tenterhooks. I […]

Mumbai, Dec 30 : Actress Muskaan Mihani, who rose to fame with her performances in 'Dill Mill Gayye', 'Jugni Chali Jalandhar' and 'Ring Wrong Ring', feels the new year is best celebrated at home along […]