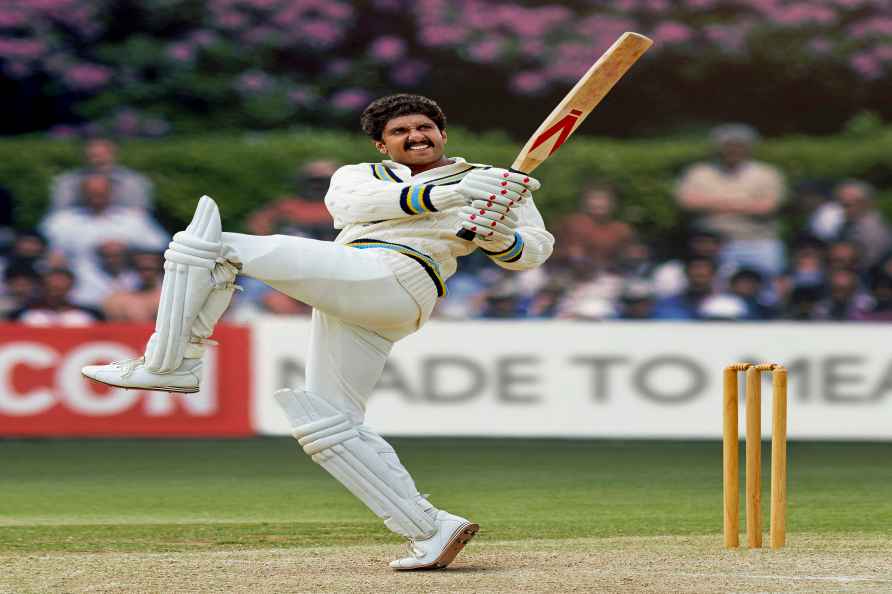 Mumbai, Nov 30 : The trailer for Ranveer Singh-starrer '83' is finally unveiled bringing alive one of the most unforgettable moments of Indian cricket. Ranveer stars as former star cricketer Kapil Dev in the film, which tells the story of how the Indian cricket team, "a team that no one believed in", brought the World Cup home in 1983 after beating the champions, West Indies in a match. The over-three-minute long trailer, started with the Indian team faltering on the field. Ranveer as Kapil declares at the press conference that they are 'here to win'. Acclaimed actor Pankaj Tripathi plays the then-manager of the team PR Man Singh, is seen telling Kapil, "35 saal pehle hum log aazaadi jeete, magar izzat jeetna baaki hai, kaptaan (We won independence 35 years ago but we are yet to win respect, captain)." The later half of the trailer, showcases how the Indian team makes an impactful comeback, with Kapil hitting back-to-back sixes, smashing dressing room windows, glasses and windscreens of cars. Actress Deepika Padukone, who is essaying the role of Kapil's wife Romi Dev too makes several appearances in the trailer. Other actors such as Tahir Raj Bhasin, Jiiva, Saqib Saleem, Jatin Sarna, Chirag Patil, Dinker Sharma, Nishant Dahiya, Harrdy Sandhu, Sahil Khattar, Ammy Virk, Addinath Kothare, Dhairya Karwa and R.Badree too make a appearances in the trailer. Directed by Kabir Khan, 83 is one of the most anticipated films of the year. Reliance Entertainment and Phantom Films present 83, a Kabir Khan Films Production. Reliance Entertainment and PVR Pictures release. '83' is slated to release on December 24 in Hindi, Tamil, Telugu, Kannada and Malayalam. Also in 3D. /IANS

Prem Chopra, wife in hospital after testing Covid positive
Mumbai, Jan 3 : Veteran actor Prem Chopra and his wife Uma have been admitted to Mumbai's Lilavati Hospital after the two were tested positive for Cov

Big-ticket releases make 2022 an interesting year for Kartik Aaryan
Mumbai, Jan 3 : Kartik Aaryan, who made an impressive OTT debut with 'Dhamaka', is excited for 2022 with the kind of projects that he has in the pipel

Mumbai, Jan 3 : Maharashtra on Monday notched a sharp increase in Covid-19 cases and of its variant Omicron with Mumbai continuing to bear the maximum caseload, health officials said. For the si […]

Over 38,000 teenagers get first Covid vax jab in Kerala

Thiruvananthapuram, Jan 3 : On the first day of vaccination for those aged 15 to 18, 38,417 children were administered the first dose in Kerala on Monday, state Health Minister Veena George said. […]

Death toll rises to 16 in collision between bus and truck in Jharkhand's Pakur: official.

Death toll rises to 16 in collision between bus and truck in Jharkhand's Pakur: official. […]

New Delhi, Jan 3 : The Enforcement Directorate (ED) on Monday said that they have provisionally attached immovable assets worth Rs 26.25 crore in form of land, residential and commercial properties of […]