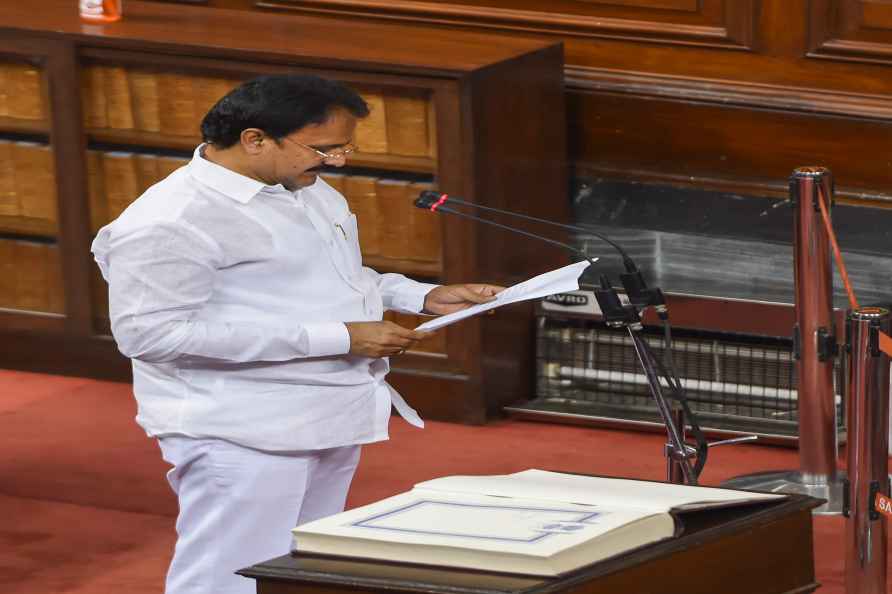 New Delhi, Nov 29 : Five new members ook oath on Monday in the Rajya Sabha as the winter session of Parliament begins. Three of the five members are from the DMK and one each is from the Congress and Trinamool Congress. All the newly new MPs took oath in their native languages. Rajni Patil, elected from Maharashtra on a Congress ticket, took oath in Marathi. Luizinho Falerio elected on the Trinamool Congress ticket from West Bengal took oath in Konkani as he hails from Goa. And the three DMK members took oath in Tamil. They are Kanimozhi N.V.N. Somu, M. Mohamed Abdulla and K.R.N. Rajesh Kumar. The House also paid tributes to the departed MPs Oscar Fernandes, who was a sitting member. Former MPs' -- K.B. Shanappa, Chandan Mitra, Hari Singh Nalwa, Monika Das Abani Roy and others who passed away in between the sessions, were also remembered. The House paid respects to the departed souls and as a mark of respect observed two-minute silence. The chairman directed the Secretary General to convey condolences to the bereaved families. The Rajya Sabha adjourned for one hour in memory of sitting Congress MP Oscar Fernandes who passed away recently due to illness. /IANS

Mayawati opts for a subdued birthday this year
Lucknow, Jan 10 : Bahujan Samaj Party (BSP) chief Mayawati's 66th birthday on January 15 this year, will not be a grand affair. The BSP presiden

Gaza population increases amid high poverty, unemployment
Gaza, Jan 10 : The coastal enclave of Gaza has witnessed a huge hike in population, which might be a bane rather than a boon for the overcrowded and b

Seoul, Jan 10 : South Korea's Unification Ministry said on Monday that it was closely watching a possible change in North Korea's anti-Covid-19 policy, such as the lifting of its strict border closure […]

Mumbai, Jan 10 : On his 48th birthday on Monday, Bollywood star Hrithik Roshan treated his fans with his first look as Vedha from the upcoming film 'Vikram Vedha'. Hrithik took to Instagram, whe […]