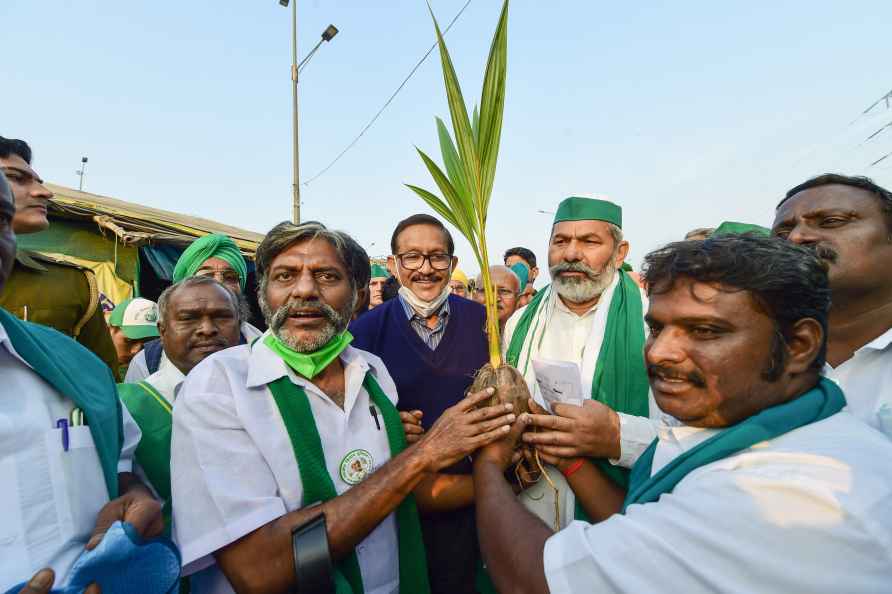 [New Delhi: Bharatiya Kisan Union (BKU) spokesperson Rakesh Tikait with farmers after a bill to cancel the three contentious farm laws was passed during the Winter Session of the Parliament, at Ghazipur border in New Delhi, Monday, Nov. 29, 2021. ( /PTI] New Delhi, Nov 29 : A year and two months after the President gave assent to the three contentious farm laws, the Parliament on Monday passed a Bill to repeal them, a demand kept alive by the farmers and opposition parties alike for the past year. First the Lok Sabha and then the Rajya Sabha passed The Farm Laws Repeal Bill, 2021 by voice vote sans a debate amid heavy sloganeering by the opposition that wanted a discussion on the issue. In both the houses, the Bill was passed within minutes of introduction by the government. The three Bills that stand repealed now are: Farmers' Produce Trade and Commerce (Promotion and Facilitation) Bill, 2020, Farmers (Empowerment and Protection) Agreement on Price Assurance and Farm Services Bill, 2020 and Essential Commodities (Amendment) Bill 2020. Farmers across the country under the Samyukt Kisan Morcha (SKM) banner had been agitating since last one year demanding repeal of the three farm laws and legalizing minimum support price (MSP) among other issues. In the Lok Sabha, soon after it assembled at 12 noon, Union Agriculture Minister Narendra Singh Tomar presented the Bill when opposition members started raising slogans, some left their seats and walked down towards the well, and all demanded a discussion on the Bill. Speaker Om Birla said the discussion will happen if only the members behaved and stopped sloganeering and sat in their respective seats. The opposition members did not relent. The Speaker put the Bill for voice vote and it was cleared within seconds even as the opposition continued sloganeering protesting that there was no discussion. In the Rajya Sabha, when the House assembled at 2 p.m., the Union Agriculture Minister Narendra Singh Tomar introduced the Bill. Leader of Opposition in the Rajya Sabha, Mallikarjun Kharge said, opposition parties welcomed the Bill and stated the opposition's view on the Repeal Bills demanding a discussion. When he spoke for more than three minutes, Deputy Chairperson Rajya Sabha asked him to stop and allowed the Agriculture Minister to move the motion, immediately prompting the opposition benches to raise slogans. However, saying that "there is no need for a discussion," Tomar moved the motion to pass the Bill and it was passed by voice vote. The government had similarly rushed through the two houses when the three original bills were passed on September 17 and September 20 last year. Opposition parties had attacked the government then and, on Monday, minced no words as the Bill to repeal those laws was bulldozed through both the houses. Congress leader Rahul Gandhi said, "We knew that the Bills would be repealed. This is farmers' victory. But this government is afraid of discussions. It was wrong on the part of the government to withdraw bills without a discussion." Soon after the Bill was passed in the Lok Sabha, outside the Parliament, NCP leader Supriya Sule told media persons, "This is a black day for democracy. The government wants to do 'Mann Ki Baat' (own talk) but does not want to listen to the 'Jan Ki Baat' (people's talk)." Rakesh Tikait, one of the prominent members of the farmers' agitation told media persons, "The government wants there should be no protests but we will not leave the site before MSP is discussed among other issues." In counter to opposition leaders' allegations, Union Minister Pralhad Joshi said, "The Prime Minister has shown large heartedness and agreed to repeal the three laws. The farmers' organisations were demanding it; the opposition parties were demanding it. We agreed to their demand and brought in this Bill." Incidentally, former Minister and Congress leader, Jairam Ramesh had tweeted right in the morning: "Modi Sarkar wants to push through the 3 farm laws repeal Bill today in Parliament WITHOUT any debate. The passage of the laws 16 months ago was most undemocratic. The manner of repeal is even more so. The Opposition demands a discussion before repeal." /IANS

Bengaluru, Dec 29 : Bruhat Bengaluru Mahanagara Palike (BBMP) authorities are taking up all required preparations for a mega drive to vaccinate about 5 lakh children in the 15-18 age group against Cov […]

New Delhi, Dec 29 : Delhi residents on Thursday woke up to moderate fog, a day after the national capital received rainfall amid the biting winter, while the Air Quality Index (AQI) improved to the 'm […]

New Delhi, Dec 29 : Financial intelligence teams probing the recovery of around Rs 200 crore during raids in Kanpur-Kannuj have now found that perfume and compound businessman Piyush Jain has links ac […]