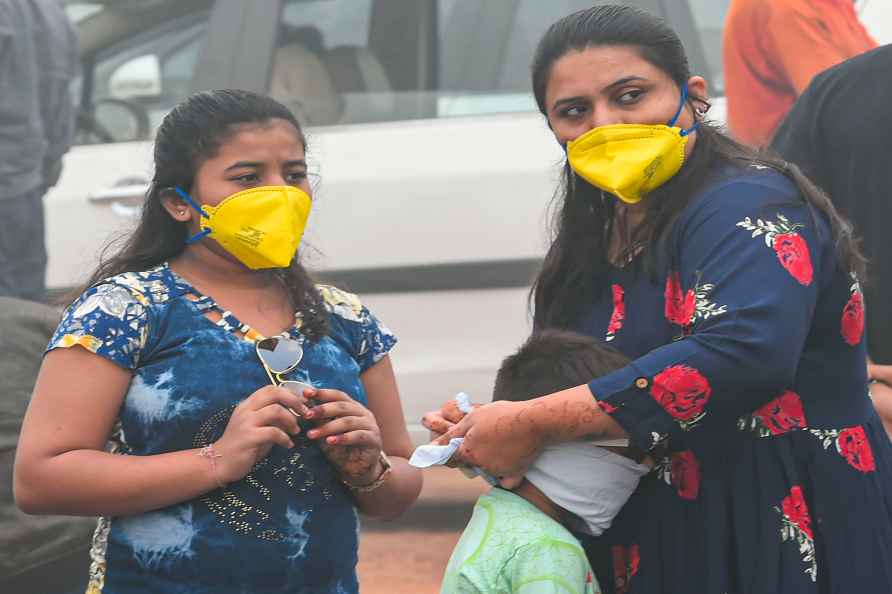 New Delhi, Nov 29 : Delhi-NCR woke up to a foggy Monday morning with its minimum temperature settling at 10 degrees celsius and an overall Air Quality Index (AQI) of 370, which is likely to deteriorate further from December 1 due to change in wind speed. The India Meteorological Department (IMD) has pegged the maximum temperature at 27 degrees Celsius. This entire week, the maximum and minimum temperatures have hovered around 27 and 10 degrees celsius, respectively with foggy mornings. The relative humidity at 8.30 a.m. stood at 97 per cent. On Sunday, the relative humidity at 7.30 p.m. was recorded at 69 per cent. An AQI between zero and 50 is considered 'good', 51 and 100 'satisfactory', 101 and 200 'moderate', 201 and 300 'poor', 301 and 400 'very poor', then 401 and between 500 is considered 'severe'. On the air quality front, the level of PM 2.5 and PM 10 are in the 'very poor' category in the city's air with 211 and 353, respectively, according to the System of Air Quality and Weather Forecasting And Research (SAFAR). As per SAFAR estimates, the local surface winds are likely to increase moderately on November 29 and 30 that increases dispersion of pollutants leading to slight improvement, but AQI remains in the 'very poor' category. From December 1 wind speed and temperature are likely to decrease, reducing ventilation leading to slight deterioration of air quality. Low mixing layer height is preventing efficient dispersion of pollutants. The share of stubble burning related pollutants in Delhi's PM2.5 is 3 per cent. /IANS

New Delhi, Jan 8 : After Prime Minister Narendra Modi heaped praises on their products and style of working, an Uttarakhand-based organic Farmers' Producers Organisation (FPO) has declared to take its […]

Tehran, Jan 8 : The Iranian Foreign Ministry said the country is ready to hold bilateral talks with each of the related countries on issues concerning the crash of a Ukrainian passenger plane near Teh […]

Brussels, Jan 8 : Inflation in the eurozone hit a new record of 5 per cent in December 2021, the highest level since recordkeeping began in 1997, the European Union's statistical arm Eurostat said. […]

New York, Jan 8 : New York City and its surrounding areas have recorded substantial snowfall leading to the cancellation of hundreds of flights in and out of the area. LaGuardia Airport posted 8 […]