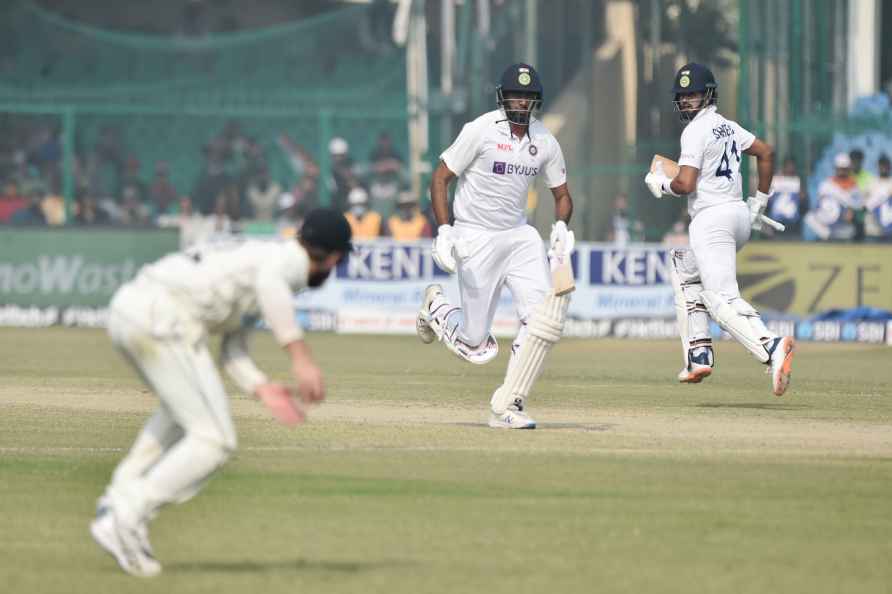 Kanpur, Nov 28 : India were in trouble mid-way in day four of the ongoing first Test against New Zealand at the Green Park Stadium. But Shreyas Iyer, Wriddhiman Saha, Ravichandran Ashwin and Axar Patel batted the hosts out of trouble, setting a target of 284 for the Blackcaps after declaring at 234/7. Before stumps, India got four overs of bowling, which yielded a wicket of Will Young taken by Ashwin to leave the tourists at 4/1. With the final day of the match left, New Zealand now face an uphill task of chasing 280 runs with nine wickets in hand. With India reeling at 51/5, Iyer and Ashwin weathered the havoc caused by New Zealand pacers by mixing caution with aggression and collecting boundaries, taking their partnership for the sixth wicket past fifty post lunch. Kyle Jamieson then struck on the second ball of his first over, ending Ashwin's gritty stay at the crease with a back of a length delivery rolling to the stumps after ricocheting off his front pad. Post Ashwin's fall, New Zealand kept things tight till Wriddhiman Saha took a four (sweep) and six (slog-sweep) off William Somerville in the 49th over. Iyer, who had kept a cautious eye while defending and rotating the strike, stepped out to smash Ajaz Patel for a six down the ground. He then reached his half-century in 109 balls, becoming the first Indian batter to get a century in the first innings and then follow it up with a half-century in second innings on debut. Iyer continued to impress by hitting two boundaries off Patel as New Zealand's spinners lacked the penetration to keep the pressure on India. Against Southee, Iyer stroked the first ball through mid-wicket. But on the next ball, the 64-run stand was brought to an end at the stroke of tea as Iyer tried to pull Southee but an inner edge off the glove went behind to Blundell. India then began the final session with Saha and Patel collecting a boundary each off Jamieson. Southee tried to repeat the Jadeja set-up with Patel, only for the left-hander to drive down the ground while Saha glanced him through fine leg. The duo showed good application and continued to bat without taking any needless risk, keeping New Zealand frustrated. Saha, who couldn't keep wickets on day three due to neck stiffness, brought up his sixth Test half-century with a brace through fine leg off William Somerville. Patel then raised the half-century of the partnership with a clean slog over deep mid-wicket off Ajaz Patel. When declaration was taken, Saha and Patel had put on a stand of 67 runs to set an imposing total for New Zealand. Earlier, New Zealand had made inroads through India's batting, leaving the hosts at 51/5 in 19.4 overs. Cheteshwar Pujara and Mayank Agarwal added 18 runs to overnight score of 14/1, as New Zealand were a little loose. The tourists corrected themselves quickly as Kyle Jamieson scalped the first wicket of the day in the 12th over, taking out Pujara with a short ball going down leg, which he gloved behind to keeper Tom Blundell. Initially given not out, New Zealand reviewed the decision which was overturned after replays confirmed the glove edge. Ajinkya Rahane drove Ajaz Patel through extra cover in the 15th over. But on the next ball, Patel had the last laugh, trapping Rahane plumb in front of the wicket with a quick slider. Mayank Agarwal and Shreyas Iyer hit a streaky boundary each until Tim Southee joined the wicket-taking party. Southee was rewarded for his nagging spell with a double-wicket maiden in the 20th over. He first enticed Agarwal to come forward, forcing a thick outer edge off his bat to second slip with Tom Latham completing the catch. Two balls later, Southee trapped Ravindra Jadeja lbw with an inswinger for a duck. Jadeja took the review but replays showed the ball crashing into the leg-stump. But Iyer, Saha, Ashwin and Patel ensured that New Zealand were kept at bay for the rest of the innings on a weary pitch. After India staged an excellent recovery, the hosts struck early in New Zealand's chase. Ashwin struck Young's front pad after going past the bat with a delivery which kept low. After being given out, Young took too much time to consult his opening partner Tom Latham in taking a review. Young pressed for the 'T' signal but by then, the 15-second time period was over and review was denied. The hesitancy in taking the review quickly cost Young and New Zealand as the ball was shown missing the stumps. Young's scalp resulted in Ashwin equalling Harbhajan Singh's 417 Test wickets, making day four a happy one for India. Brief Scores: India 345 (Shreyas Iyer 105, Tim Southee 5/69) and 234/7 d in 81 overs (Shreyas Iyer 65, Wriddhiman Saha 61 not out, Kyle Jamieson 3/40, Tim Southee 3/75) against New Zealand 296 in 142.3 overs (Tom Latham 95, Axar Patel 5/62) and 4/1 in 4 overs (Ravichandran Ashwin 1/3), need 280 runs to win. /IANS

Remaining matches of BBL may be held entirely in Melbourne: Reports
Melbourne, Jan 1 : With COVID-19 rocking the ongoing Big Bash League, Cricket Australia (CA) may consider hosting the remainder of the tournament in M

Conway century gives New Zealand strong start against Bangladesh in 1st Test
Mount Maunganui, Jan 1 : Devon Conway scored a patient century, while Will Young made a workman-like half century as New Zealand overcame the loss of

Kirsten would like Sir Cook on board if he's given the chance to coach England
London, Jan 1 : Former South African cricketer Gary Kirsten has said that it would be a "massive privilege" to coach the England side, adding that if

Srinagar, Jan 1 : The Jammu and Kashmir Police said on Saturday that one of the terrorists killed in the Anantnag encounter on December 30 last year was likely to be the last surviving militant involv […]

Ottawa, Jan 1 : Canada is going through its worst spike in Covid cases, driven by the Omicron variant, with 41,210 new cases reported on Friday evening, an all-time high for daily cases since the pand […]