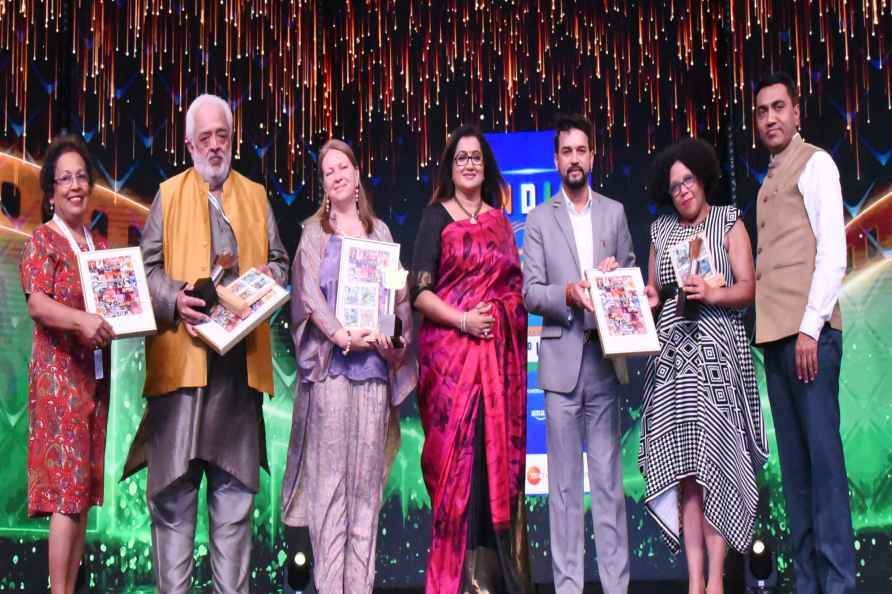 [**EDS: IMAGE MADE AVAILABLE FROM PIB** Panaji: Jury members of BRICS film festival being felicitated, at the closing ceremony of the 52nd International Film Festival of India (IFFI-2021), in Panaji, Goa on Nov. 28, 2021.Union Minister for Information & Broadcasting, Youth Affairs and Sports Anurag Singh Thakur and the Chief Minister of Goa Dr. Pramod Sawant are also seen. ( /PTI] Panaji, Nov 28 : Stating that he believed that IFFI was a great vehicle to encourage India's next generation of filmmakers, actor Manoj Bajpayee on Sunday said that he believed the country, with its huge population, could be a great force in entertainment. Speaking at the closing ceremony of the 52nd edition of the International Film Festival of India here, Bajpayee said, "I personally believe that the IFFI, organised by the government of India is a great vehicle to instigate and encourage new filmmakers and the coming generation of filmmakers. A country of such a huge population can actually be a great force in entertainment in the coming years in the world and this platform (referring to IFFI) is going to be the major force behind them." Earlier, the actor was honoured on the occasion by Goa Chief Minister Pramod Sawant, Union Minister of Information and Broadcasting Anurag Thakur and lyricist and CBFC chairperson Prasoon Joshi. /IANS

PM to lay foundation for over 25 projects worth Rs 5,500 cr in Manipur, Tripura
[**EDS: TWITTER IMAGE POSTED BY @narendramodi ON MONDAY, JAN. 3, 2022.** Agartala: A view of the new Integrated Terminal building of Maharaja Bir Bikr

Terrorist killed in Srinagar encounter identified
[Srinagar: Security personnel during an encounter with militants at Gusoo village on the outskirts of Srinagar, Monday, Jan. 3, 2022. Two militants in

Sydney, Jan 3 : Cricket Australia (CA) on Monday confirmed that its Chief Executive Officer (CEO) Nick Hockley had tested positive for COVID-19, and added that he "has had no direct contact with the T […]

Delhi-NCR to receive rainfall from Jan 5-9

New Delhi, Jan 3 : Delhi-NCR is likely to receive rainfall from January 5 to 9, the India Meteorological Department (IMD) said in its weekly forecast for the national capital. The sky will remai […]

Agra, Jan 3 : Rani Devi, who had been protesting for 81 days demanding a road and proper drainage system in Dhanoli, Ajeejpura and Siroli villages in Uttar Pradesh's Agra, has died at the protest site […]

By Asad Mirza New Delhi, Jan 3 : A lot has happened in the bilateral relations between India and Maldives during the last 10 years. The relations which were once described as one of the most vibran […]