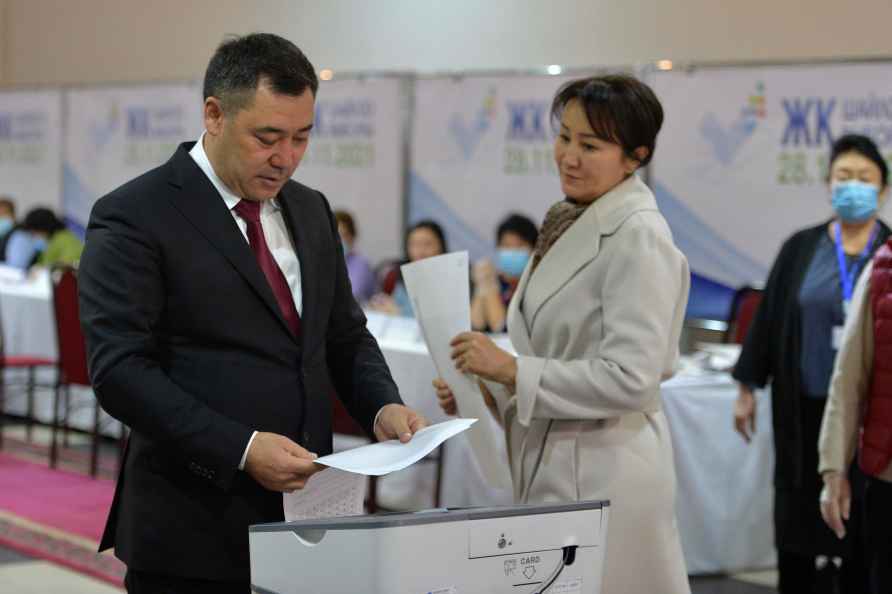 [Bishkek: Kyrgyzstan's President Sadyr Zhaparov and his wife Aigul Asanbaeva cast their ballots at a polling station during the parliamentary elections in Bishkek, Kyrgyzstan, Sunday, Nov. 28, 2021. Voters in Kyrgyzstan cast ballots in a parliamentary election Sunday that comes just over a year after a forceful change of government in the ex-Soviet Central Asian nation. /PTI] Bishkek, Nov 28 : Parliamentary elections in Kyrgyzstan started on Sunday under the watch of 736 international observers to elect 90 deputies for a five-year term. The country's Head of the Central Election Commission (CEC), Nurzhan Shaildabekova, during a briefing on Sunday morning said that 2,435 polling stations have been opened in the country at 8 a.m. local time (0200 GMT), which will work until 8 p.m. (1400 GMT). Another 59 polling stations would be opened abroad in 29 countries. The deputies will be elected through a mixed electoral system with 54 of them to be elected according to a proportional system from political parties, and 36 others to be elected from single-mandate constituencies on a majority basis, Xinhua news agency reported. Twenty-one political parties were registered to participate in the elections, more than 280 candidates were registered in single-mandate constituencies. According to data from the CEC head, a total of 3,703,420 people will vote for the political parties, and 3,619,292 are going to vote in the single-mandate constituencies. The Interior Ministry said earlier that more than 11,000 police officers would be deployed to ensure public order and security at polling stations. /IANS

SA v IND, 2nd Test: Start of day four delayed due to inclement weather
[Johannesburg: The covers are pulled over the pitched as rain delayed play at the start of the fourth day of the second cricket test match between Sou

Los Angeles, Jan 5 : Singer Cher has opened up about her changing locks over the years, having switched up her signature black hair to go blonde and even red over the years, but she doesn't plan on ev […]

[Johannesburg: The covers are pulled over the pitched as rain delayed play at the start of the fourth day of the second cricket test match between South Africa and India at the Wanderers stadium in Jo […]