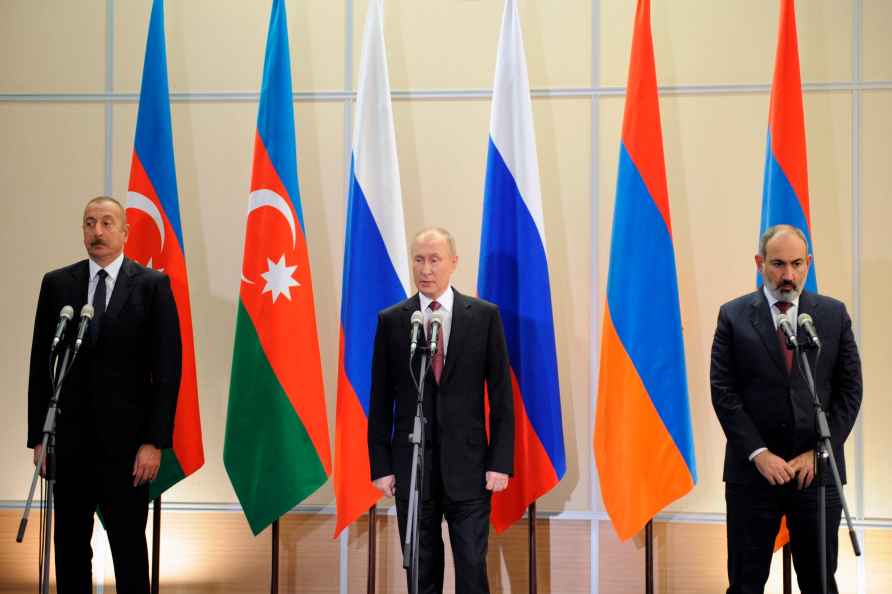 United Nations (New York), Nov 28 : UN Secretary General Antonio Guterres has welcomed the trilateral meeting between Armenia, Azerbaijan and Russia over the settlement of the Nagorno-Karabakh conflict. Guterres took note of the joint statement and noted with appreciation the role of Russia in facilitating continuing contacts and dialogue between Armenia and Azerbaijan, said Farhan Haq, Deputy Spokesman for the Secretary General, in a statement. Russian President Vladimir Putin, Azerbaijani President Ilham Aliyev and Armenian Prime Minister Nikol Pashinyan agreed to create mechanisms for the demarcation and delimitation of the Armenian-Azerbaijani border by the end of 2021, Putin said on Friday following their trilateral meeting in the Russian city of Sochi, Xinhua news agency reported. "The Secretary General is encouraged by the resumption of direct engagement at the highest level between Armenia and Azerbaijan and their recommitment to fully implement the trilateral statements of November 9, 2020, and January 11, 2021, and to take concrete steps aimed at increasing stability in the region," said the statement, referring to the November 2020 ceasefire agreement and the January 2021 agreement to restore transportation in Nagorno-Karabakh. Guterres reiterated the UN's principled position that lasting peace can only be achieved through dialogue and urged the parties to resolve outstanding issues to that end through all available formats, including under the auspices of the co-chairs of the OSCE (Organization for Security and Cooperation in Europe) Minsk Group, which consist of representatives from France, Russia and the United States, said Haq in the statement. The UN stands ready to support all such efforts, including through the provision of humanitarian, recovery and peacebuilding assistance on the ground, the statement added. Armenia and Azerbaijan have been at loggerheads over the mountainous region of Nagorno-Karabakh since 1988. Peace talks have been held since 1994 when a ceasefire was reached, but there have been sporadic minor clashes. A new round of armed conflict broke out along the contact line on September 27, 2020, before Russia brokered a ceasefire on November 9, 2020. /IANS

By Vishnu Makhijani New Delhi, Jan 6 : Some people just go on and on with a burning desire to pass on their knowledge to the next generation. After more than four decades in the corporate world, dur […]

[Guwahati: School students attend classes by wearing safety mask at Rupnagar Bidyapith M.E School ahead of the declaration of the new SOP in the state amid rising cases of Omicron variant of COVID-19 […]

Melbourne: Naomi Osaka of Japan plays a forehand during their singles...

Melbourne: Naomi Osaka of Japan plays a forehand during their singles match against Andrea Petkovic of Germany at Summer Set tennis tournament ahead of the Australian Open in Melbourne, Australia, Fri […]