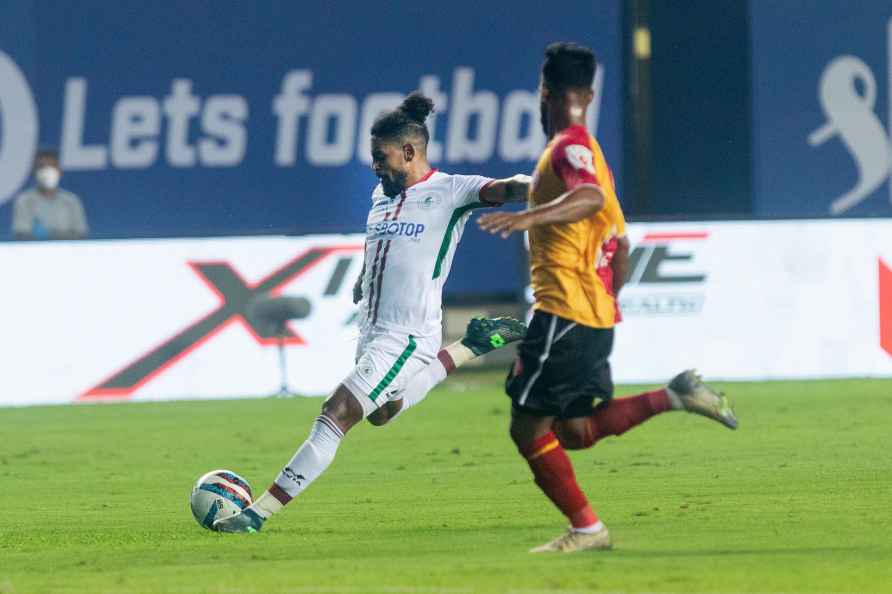 [Goa: Roy Krishna (L) of ATK Mohun Bagan and Mohammad Rafique of SC East Bengal in action during match 9 of season 8 of Indian Super League football tournament between ATK Mohun Bagan and SC East Bengal, at the Tilak Maidan Stadium, in Goa, Saturday, Nov. 27, 2021. (ISL/ /PTI] Margao, Nov 27 : Arch-rivals and previous edition's runners-up ATK Mohun Bagan will take on SC East Bengal in the much-anticipated Kolkata derby in the Indian Super League (ISL), with the latter hoping to get a win under their belt at the Tilak Maidan here later on Saturday. While ATK Mohun Bagan started their campaign with a 4-2 win against Kerala Blasters FC on the opening day of the season, SC East Bengal struggled and finally shared points with Jamshedpur FC in a 1-1 draw. SC East Bengal are winless in their last five competitive matches, having lost three and shared points in the remaining two. However, they would draw inspiration from pre-season practice games, where they won three and drew against defending champions Mumbai City in the fourth. ATK Mohun Bagan have won three of their last five matches and drawn one. It includes matches from the 2021 AFC Cup, where they beat ISL rivals Bengaluru FC and Maziya FC of Maldives, but were thrashed by Uzbekistan side Nasaf FC in the inter-zonal semifinal. However, with the star-studded line-up they boast of, they will take the field as favourites. In the two matches played between these sides last season, ATK Mohun Bagan won both with Roy Krishna scoring once in each game. ATK Mohun Bagan would be pleased with the convincing win over Kerala Blasters on the opening day, but a few areas need improvement. Head coach Antonio Lopez Habas went with a more conservative back-four, after the 0-6 hammering against Nasaf FC in the AFC Cup. But, that did not stop the Kolkata outfit from conceding two goals in the last game. The midfield has been more agile, with Lenny Rodrigues, Hugo Boumous combining well with the Finnish playmaker Joni Kauko to maintain fluidity. However, they need to play more matches together to reach an optimum level, in terms of efficiency in the playmaking zone. Krishna, who scored from the spot on the opening night, was threatening as usual. But, it would be interesting to see how much of game time David Williams gets, with the striker starting from the bench in the previous game, owing to the new foreigner policy. /IANS

Dhaka, Dec 29 : The Unicef said on Wednesday that it has delivered over 100 million Covid-19 vaccines to Bangladesh since June this year. "The arrival today of 20.46 million doses of vaccines fr […]

Director Arun Vaidyanathan tests positive for Omicron in the US

Chennai, Dec 29 : Tamil Director Arun Vaidyanathan, who is known for having made thrillers such as 'Achamundu Achamundu' and Mohanlal's 'Peruchazli', has tested positive for the Omicron variant of Cov […]

New Delhi, Dec 29 : The Indian Army with the help of National Security Council Secretariat (NSCS) has established a Quantum and Artificial Intelligence Lab at Military College of Telecommunication Eng […]