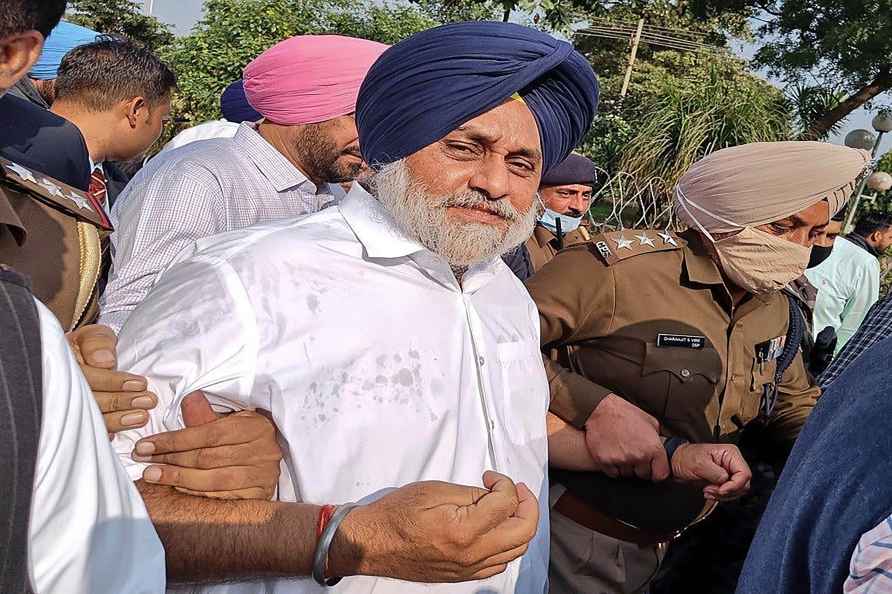 [**EDS: IMAGE PROVIDED BY SAD** Chandigarh: Shiromani Akali Dal (SAD) President Sukhbir Singh Badal being detained by police, during a protest outside Punjab CM's residence over the alleged conspiracy to arrest SAD leaders in false cases, in Chandigarh, Saturday, Nov. 27, 2021. ( /PTI] Chandigarh, Nov 27 : Shiromani Akali Dal (SAD) President Sukhbir Singh Badal on Saturday courted arrest along with the party's core committee members to register their protest against the 'conspiracy' of the Congress government in Punjab to implicate party leader Bikram Singh Majithia in a 'false' drugs case. Despite heavy security outside, senior leaders of the party overcame barricading to march to the Chief Minister's residence and courted arrest in front of it. The SAD chief said that state Congress President Navjot Sidhu was resorting to extra constitutional measures by directing the state government to register a false case against Majithia. "The Chief Minister and the Home Minister have not only agreed to this demand in order to divert attention from the failures of the Congress government, but have also directed the DGP to register the false case. The SAD is very clear in this matter. All such persons will be prosecuted once the SAD-BSP alliance government is formed in the state next year. We will also set up a commission to probe these false cases, including those registered against Akali workers," Badal said. Badal also made it clear that SAD will not be intimidated by such tactics. "We will continue to raise our voice in favour of the people and demand fulfilment of the promises made to them by the Congress," the SAD leader said. He also said that the party would simultaneously continue to fight the repression and acts of vendetta against senior party men and workers alike. Announcing that the senior party leadership had come to court arrest, Badal said, "The Congress government has constantly politicised both the sensitive issues of sacrilege and drugs. It is with this in mind that its top leaders and the DGP met to conspire and frame me in a false case. The conspiracy was, however, exposed by SAD. Now another conspiracy has been hatched to implicate Bikram Majithia in a false drugs case. We will expose this conspiracy also." Meanwhile, before proceeding towards the CM's residence, both Badal and Majithia talked to contractual teacher Sohan Singh who had climbed atop a BSNL tower near the MLA flats. They were apprised that the contractual teacher had climbed the tower in protest against the reduction in the salaries of contractual teachers, and the government's failure to regularise their services. /IANS

Delhi's striking resident doctors call for total medical service shutdown
[Latakia: In this photo released by the Syrian official news agency SANA, flames and smoke rise from burning containers at the scene of a missile atta

After 14 years, Benazir Bhutto's assassination still remains a mystery
[Vellore: Sriharan alias Murugan, one of the convicts of the former prime minster Rajiv Gandhi assassination case, being produced before the Judicial

[Latakia: In this photo released by the Syrian official news agency SANA, flames and smoke rise from burning containers at the scene of a missile attack, at the seaport of the coastal city of Latakia, […]

Pretoria: India's batsman Mohammed Shami reacts as after being caught from behind by South Africa's wicketkeeper Quinton de Kock during the third day of the Test Cricket match between South Africa and […]