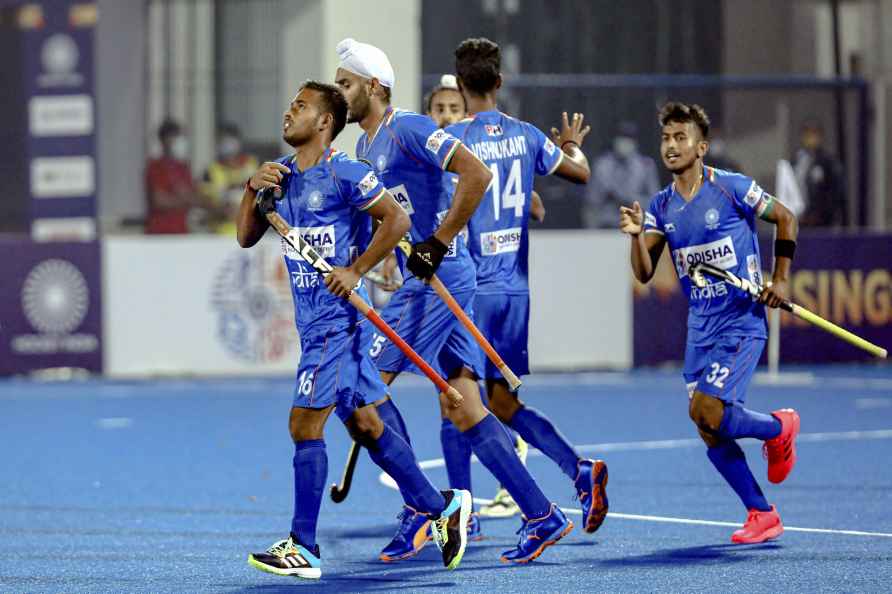 [Bhubaneswar: Indian players greet each other after a goal against Canada (in red) during FIH men's Junior World Cup (hockey) 2021 match at Kalinga Stadium in Bhubaneswar, Thursday, Nov. 25, 2021. ( /PTI] Bhubaneswar, Nov 25 : France became the first team to virtually assure themselves a spot in the quarter-finals with a dominant 7-1 win against Poland in a Group B match for their second win in the FIH Odisha Hockey Men's Junior World Cup 2021 here on Thursday. France, who had stunned hosts and defending champions India 5-4 in their opening match on Wednesday, scored three goals in the first quarter as they did not allow Poland to play their game and registered a comprehensive victory at the Kalinga Stadium here. Forward Corentin Selliers scored a hattrick and skipper Timothee Clement struck a brace of goals for France while Igau Antonin and Bournac Jules scored a goal apiece for Les blues as they came up with another dominant performance. Igau had struck the openers within seconds of the pushback and before Poles could react and Clemens made it 2-0 even before one minute was over, converting their first penalty corner. Sellier struck his first goal in the 11th minute and France were up and away, cruising with a 3-0 lead. Poland reduced the margin early in the second quarter but their hopes of more goals did not materialise as the French defended well. The second win in the four-team Pool B put France on top with Poland second with one point from a win against Canada. With India playing Canada in the last match of the day, there are only three matches remaining in the group. If India beat Canada, they will fight with Poland fighting for second place in the Pool behind the French. India and Poland meet in their last preliminary league match on Saturday (Nov 27) while France take on Canada earlier on the same day. The winner of the India v Poland match will decide the second runners-up spot in Pool B. France's place in the quarters looks assured unless Canada cause the biggest upset of the event by beating India on Thursday. In that situation, the hosts will drop out of contention and Canada and Poland will fight for the second quarter-final berth from this Pool. /IANS

Top 21 male performers in sports in the year gone by
[Mt Maunganui: Devon Conway of New Zealand celebrates his century during play on day one of the first cricket test between Bangladesh and New Zealand

Akshay Oberoi: 2021 has been a busy year

Mumbai, Jan 1 : As the curtains came down on 2021, actor Akshay Oberoi, who is currently taking time off from work to celebrate his birthday with his family in the US, recalled how last year was busy […]

Jammu, Jan 1 : The armies of India and Pakistan exchanged sweets with each other on Saturday to mark the New Year on the Line of Control (LoC) in Jammu and Kashmir. A defence ministry statement […]