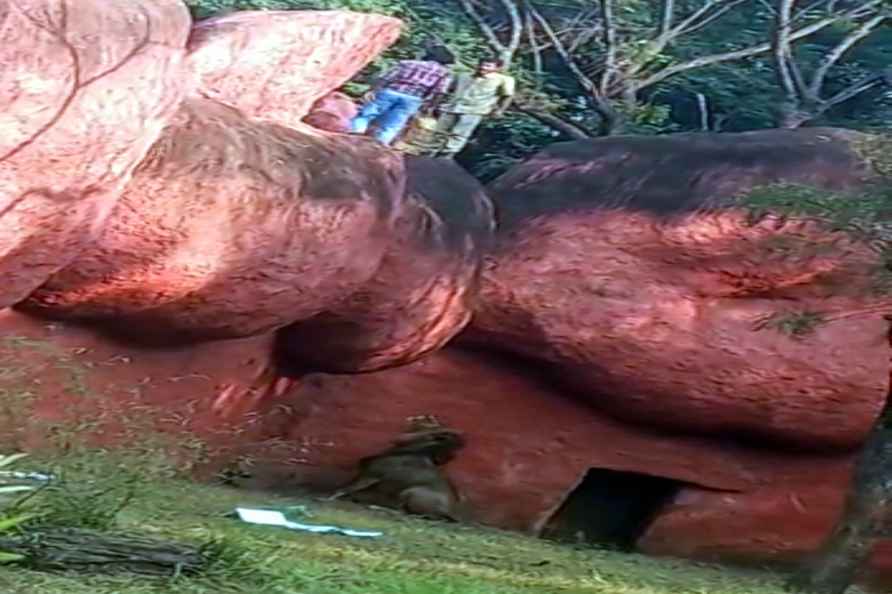 [**EDS: VIDEO GRAB** Hyderabad: Zoo workers stop a 31-year-old man from entering the restricted African Lion moat area at the Nehru Zoological Park, in Hyderabad, Tuesday, Nov. 23, 2021. ( /PTI] Hyderabad, Nov 23 : A man managed to reach on to the boulders of the African lion moat area at Nehru Zoological Park here on Tuesday, giving some tense moments to the zoo staff and visitors. He, however, was rescued by Zoo staff, who handed him over to police. The 31-year-old man, later identified as G. Sai Kumar, managed to get on to the boulder of the African Lion moat area, where the lions are released in the exhibited enclosure. According to Nehru Zoological Park curator S. Rajashekar, the incident occurred around 3.30 p.m. He said the person was walking vulnerably on the boulders of the moat area, which is totally a prohibited area. A video released by the Zoo authorities shows the man sitting vulnerably on a boulder while the lion was staring at him from the ground. It appeared as if he was going to jump down. The visitors were terrified and were heard shouting to dissuade him. Two Zoo employees appeared from behind and one of them ordered him to come out. It was only then that the man walked away. The Zoo staff caught and handed him over to Bahadurpura police station. The police registered a case and began questioning him. It was not clear how the man managed to reach the prohibited area. In 2016, a 35-year-old drunk man had jumped into a lion enclosure at Nehru Zoological Park but was rescued unhurt by the alert animal keeper. Mukesh, a native of Sikar district in Rajasthan, had crossed the barricade of the African lion enclosure despite warnings by the security staff. /IANS

BSF to get over 100 steel fabricated habitats along LoC in J&K
[Lviv: CORRECTS THAT NLAW ARE ANTI-TANK AND NOT ANTI-AIRCRAFT MISSILES - Ukrainian soldiers take part in an exercise for the use of NLAW anti-tank mis

78 days in jail gave opportunity to introspect: Cong candidate in Punjab
[Jalandhar: Delhi Chief Minister Arvind Kejriwal acknowledges greetings of supporters as his convoy passes through a road during his visit ahead of th

Goa: Devendra Murgaonkar (R) of FC Goa and Ricky Lallawmawma of Jamshedpur FC view for ball, during match 74 of season 8 of Indian Super League football tournament between Jamshedpur FC and FC Goa, at […]

San Francisco, Jan 27 : Tech giant Apple has likely fixed an ongoing iCloud server issue that was causing some apps that have implemented iCloud support to fail to sync properly. The bug has per […]