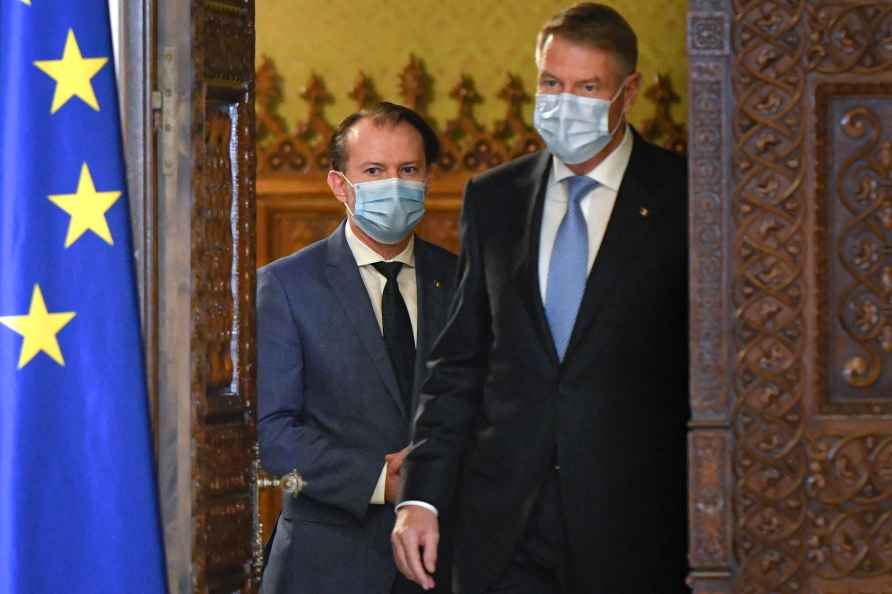 Bucharest, Nov 23 : Romanian President Klaus Iohannis has nominated Defence Minister Nicolae Ciuca to form a new government as Prime Minister. "A solid majority has been formed in the Romanian Parliament... This majority proposed name for Prime Minister, which I accepted," Iohannis said in a statement on Monday. Earlier, the National Liberal Party (PNL), the Social Democratic Party (PSD) and the Democratic Alliance of Hungarians in Romania (UDMR) reached an agreement to form a coalition government, which enjoys the support of the 18 MPs representing the country's minorities. Under the country's Constitution, the Prime Minister-designate has 10 days to form a government and win a vote of confidence in Parliament, which Ciuca is expected to win easily as his coalition holds 65 per cent of seats. The leaders of the three coalition parties said that Romania would have a new cabinet by Thursday. Ciuca, 54, was first nominated as candidate for the position of Prime Minister on October 21. However, he had to give up the mandate after he failed to get majority support in Parliament. The coalition government led by PNL Chairman Florin Citu collapsed on October 5 in a censure motion initiated by the PSD and supported by most other parties in Parliament. /IANS

Gujarat AAP leaders held for protesting outside BJP headquarters get bail
Gandhinagar, Dec 30 : The Aam Aadmi Party leaders, including state president Gopal Italia, who have been in jail for the last ten days for protesting

US to appoint 2 female diplomats to represent Washington in Kabul
By Hamza Ameer Washington, Dec 30 : The deteriorating situation in reference to the rights for women in Afghanistan under the Taliban rule has prom

Lara Dutta loved the opportunity of working with Naseeruddin Shah

Mumbai, Dec 30 : Actress Lara Dutta is over the moon on sharing the screen with veteran star Naseeruddin Shah in the series 'Kaun Banegi Shikharwati'. She says the actor was on her wishlist for the lo […]

Kolkata, Dec 30 : In the midst of the Omicron scare in West Bengal that recorded 11 cases in five days, the upward graph of Covid-19 infections is keeping the state health department on tenterhooks. I […]

Mumbai, Dec 30 : Actress Muskaan Mihani, who rose to fame with her performances in 'Dill Mill Gayye', 'Jugni Chali Jalandhar' and 'Ring Wrong Ring', feels the new year is best celebrated at home along […]