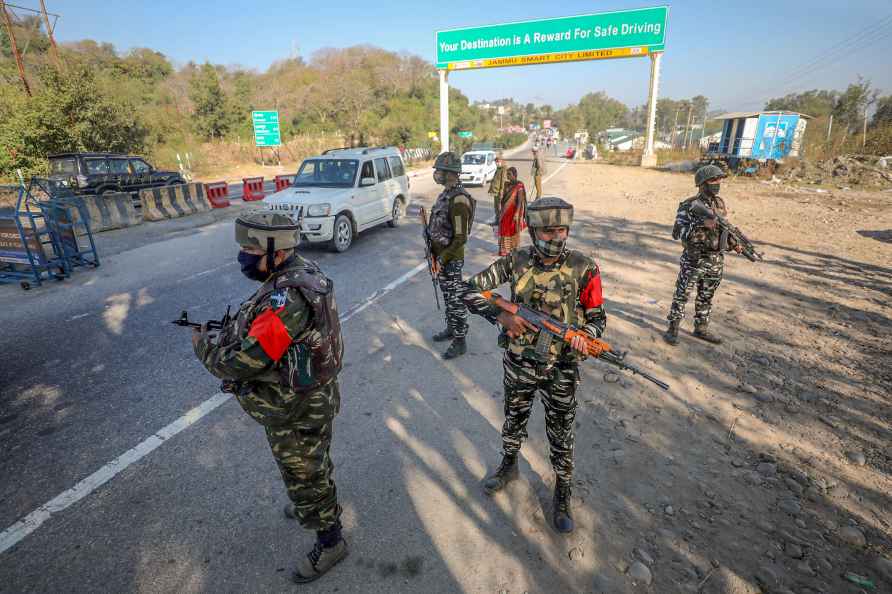 [Jammu: CRPF personnel stand guard on strategic Jammu-Srinagar national highway on Monday, Nov. 22, 2021. Security has been put on alert across Jammu following a grenade attack outside an army camp in Pathankot in Punjab. ( /PTI] Chandigarh, Nov 22 : A grenade blast occurred near an Indian Army camp in Punjab's highly sensitive Pathankot town on Monday. No one was injured in the explosion. Police reached the spot and recovered parts of the grenade. Senior Superintendent of Police Surendra Lamba told the media that investigation was underway and CCTV footage from the spot has been obtained. It is believed that motorcyclists lobbed the grenade in front of the Triveni gate of the army cantonment. Security was tightened, particularly in Punjab's border districts of Pathankot and Gurdaspur, including near the Indian Air Force base in Pathankot, which bore the brunt of terror attack on January 2, 2016, as well as nearby Mamoon Cantonment of the Army. Apart from the Punjab Police, men of the Border Security Force (BSF) and personnel of different security agencies have been put on alert following the blast. Suspected Pakistani terrorists had on July 27, 2015, attacked Dinanagar town in neighbouring Gurdaspur district, around 225 km from here, killing seven persons, including a Punjab Police officer, three Home Guards and three civilians. The three terrorists were killed after an 11-hour gun battle with the security forces at the Dinanagar police station. /IANS

78 days in jail gave opportunity to introspect: Cong candidate in Punjab
[Jalandhar: Delhi Chief Minister Arvind Kejriwal acknowledges greetings of supporters as his convoy passes through a road during his visit ahead of th

Nadal one win away from record 21st Grand Slam
[Melbourne: Daniil Medvedev of Russia celebrates after defeating Stefanos Tsitsipas of Greece in their semifinal match at the Australian Open tennis c

Hyderabad, Jan 27 : Actor Ram Charan, who attended the pre-release event, spoke highly of 'Good Luck Sakhi'. He stated that the sports drama is not a small film, but a big-ticket movie, which has all […]

Karachi, Jan 27 : Former a[ ll-rounder Shahid Afridi, who is representing Quetta Gladiators in this year's Pakistan Super League (PSL), has tested positive for Covid-19 on Thursday. The former Pakista […]