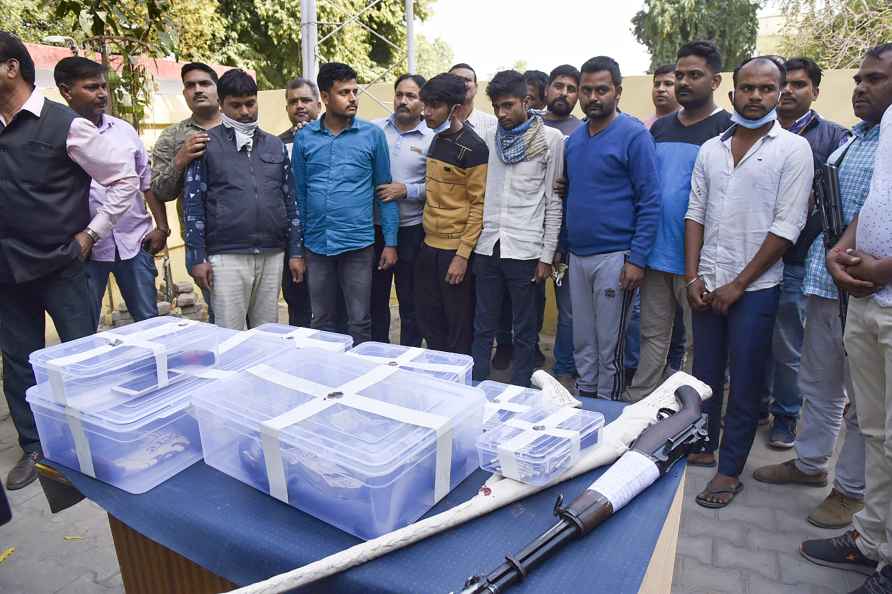 Lucknow, Nov 22 : The Special Task Force (STF) along with a team of officials of Lucknow Forest unit have arrested three persons for smuggling turtles. The arrested persons were identified as Ravindra Kumar Kashyap of Malihabad, Saurabh Kashyap of Kakori and Arman Ahmad of Sultanpur. Lucknow's district forest officer, Ravi Kumar, said at least 175 Indian roofed turtles, 60 Indian tent turtles, 19 crowned river turtles and four Indian-eyed turtles were recovered from the possession of the smugglers. A motorcycle, Rs 2,460 cash, three mobile phones and other documents were also recovered from them. The accused were arrested on Sunday from near the Indira Nagar Metro station. A team led by Deputy Superintendent of Police, STF, Deepak Kumar Singh worked on the case following a tip-off and nabbed the accused when they were about to hand over the consignment to a person. The prime accused, Raman, told the police that he was into smuggling for years and had a network in Barabanki, Sultanpur, Rae Bareli, Unnao and Bahraich. Raman said he got turtles from fishermen whom he used to pay a small amount. /IANS

Pune: Wanted killers fire at team led by Police Commissioner
Pune, Dec 27 : Blatantly defying the law-enforcers, a three-member gang of persons wanted in connection with a shootout killing, opened fire at a poli

Man held for cheating Retd Colonel of Rs 6 lakh in Noida
Noida, Dec 27 : The IT Cell of Noida Police has arrested a man who allegedly duped people by hacking their phones and transferring money from their ba

New Delhi, Dec 27 : In the wake of a spike in the number of daily Covid-19 cases in the national capital amid the emergence of the new Omicron variant, the BJP on Monday asked the Delhi government to […]

Pune, Dec 27 : Blatantly defying the law-enforcers, a three-member gang of persons wanted in connection with a shootout killing, opened fire at a police team led by Pimpri Chinchwad Police Commissione […]

Washington, Dec 27 : Even as the Omicron variant rapidly spreads across the globe, cases of Covid-19 are likely going to keep surging, top US infectious disease expert Dr. Anthony Fauci has said. […]