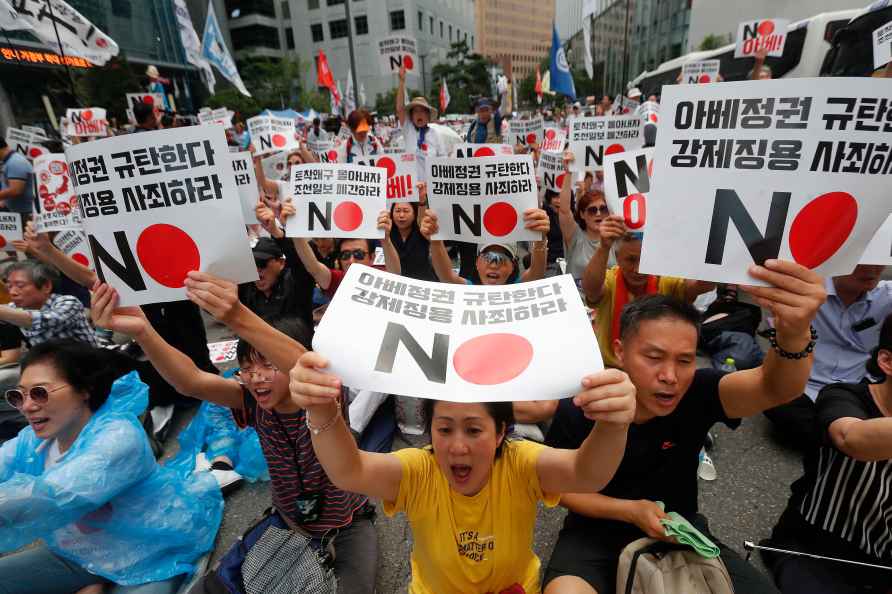 Incheon, Nov 20 : South Korea and Japan will continue diplomatic talks, a senior Seoul diplomat said on Saturday, amid a renewed spat between the two countries over the East Sea islets of Dokdo. First Vice Foreign Minister Choi Jong-kun made the remarks upon arriving home from Washington where he held talks with his US and Japanese counterparts -- Wendy Sherman and Takeo Mori, Yonhap news agency reported. Tensions over Dokdo flared when Mori boycotted a joint press availability set to involve all three diplomats, in protest over the recent visit to Dokdo by a top South Korean police officer. "There is no discontinuity in dialogue or consultations between the diplomatic authorities (of the two countries) and they will continue," Choi told reporters at Incheon International Airport, west of Seoul. "We will have consultations over issues that need to be discussed, but we will strictly stick to principles," he said. The vice minister also said that there isn't any territorial dispute between South Korea and Japan -- in a reiteration of Seoul's position that Dokdo is its inherent territory historically, geographically and by international law. Dokdo has long been a recurring source of tension between the two neighbours, as Tokyo continues to make sovereignty claims in its policy papers, public statements and school textbooks. South Korea has been in effective control of Dokdo, with a small police detachment, since its liberation from Japan's 1910-45 colonial rule. /IANS

New Delhi, Dec 27 : An injured nilgai (a type of antelope) that was rescued from near the premises of the Delhi Jal Board (DJB) in the national capital's Mandawali area, is currently being treated at […]

Ranveer Singh on '83' performance: Felt duty-bound to my nation

Kigali, Dec 27 : Rwanda has achieved the World Health Organization's (WHO) target of vaccinating 40 per cent of its entire population by December 2021, the Ministry of Health said in a statement. […]