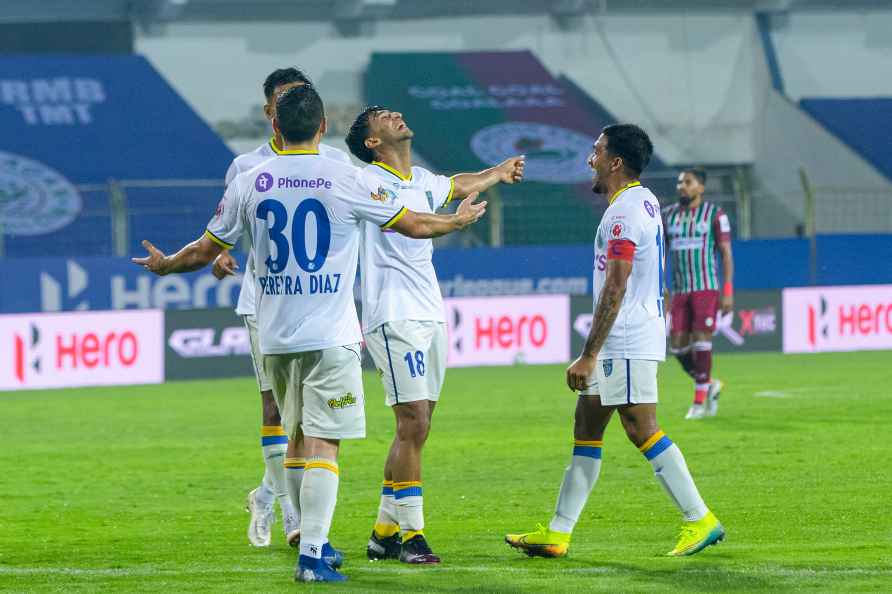 [Goa: Kerala Blasters FC players celebrate a goal during match 1 of season 8 of Indian Super League played between ATK Mohun Bagan and Kerala Blasters FC, at the Fatorda stadium in Goa, Friday, Nov. 19, 2021. (ISL/ /PTI] Margao (Goa), Nov 19 : Indian Super League (ISL) runners-up ATK Mohun Bagan will take on Kerala Blasters FC in a high-profile opening game at the Jawaharlal Nehru Stadium here later on Friday, promising plenty of action as the new football season kicks off. While ATK Mohun Bagan narrowly missed out on the title last season, Kerala Blasters FC finished second last on the standings. However, with the stakes pretty even in the upcoming match, both the sides would be aiming to bag three points and kick-start their campaign on a high. ATK Mohun Bagan have won two, lost two and shared the spoils in their last five competitive matches, which also includes the 1-2 loss to Mumbai City FC in the final of the ISL last term. However, ATK Mohun Bagan have been pretty consistent in the 2021 AFC Cup, until they were handed a humiliating 0-6 defeat against Nasaf FC of Uzbekistan in the inter-zonal semifinal. Kerala Blasters FC, on the other hand, have failed to register a win in each of their last five matches in the ISL, which justifies why they finished 10th last season, with just three wins in the season. Even though they featured in the 2021 Durand Cup, they fielded a second-string side that crashed out in the group stage itself. ATK Mohun Bagan have made fewer but significant changes to their roster ahead of the new season. The void created by the departure of Arindam Bhattacharja has been taken care of by roping in Amrinder Singh. However, Sandesh Jhinghan has been a huge and it remains to be seen how Sumeet Rathi fill in the shoes. The inclusion of Liston Colaco in the wings and Hugo Boumous in the playmaking zone bolsters the star-studded team even further. Antonio Lopez Habas is unlikely to tweak his formation which he used in most of the AFC Cup games earlier this year, with Fijian striker Roy Krishna leading the attack. However, with Boumous and Tiri anticipated to make a start, it would be a tough call to shortlist their fourth foreigner, with heavyweights like David Williams and 2020 Euro Cup star Joni Kauko among the options. There are no injury concerns as of now in the Bagan camp. The Blasters have undergone a makeover in the foreigners department, after a disastrous outing in the previous season. The signing of former Chennaiyin FC star Enes Sipovic and Croat Marko Leskovic have made the intent clear regarding their central defence, after conceding 36 goals in the previous season. Indian stars like Nishu Kumar, skipper Jessel Carneiro and Sanjeev Stalin should be more than effective in full-back positions. With goal scoring also a concern for the Tuskers, the management have reinforced their squad with experienced winger Adrian Luna, who recently guided Melbourne City FC to an A-League title and Argentine striker Jorge Pereyra Diaz, on loan. /IANS

Budget 2022: Experts exhort Centre to regulate crypto trades
[St. Petersburg: An officer shakes snow off of honour guard soldiers in snowfall at the Piskaryovskoye Cemetery where most of the Leningrad Siege vict

New Delhi, Jan 27 : Former Vice President Hamid Ansari and actress Swara Bhaskar participated in an event by IAMC on Republic Day, an organisation which tried to get India blacklisted by the US, Disin […]