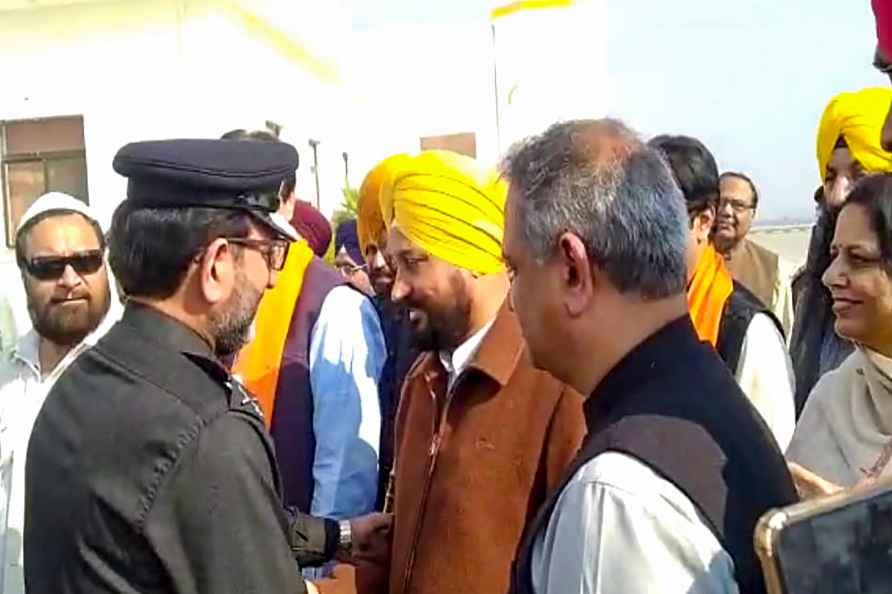 [**EDS: WITH STORY FGN18** Kartarpur: Punjab Chief Minister Charanjit Singh Channi and other state cabinet ministers during a visit to Gurdwara Darbar Sahib, in Kartarpur, Pakistan, Thursday, Nov 18, 2021. The Kartarpur Corridor links Gurdwara Darbar Sahib in Pakistan, the final resting place of Sikhism founder Guru Nanak Dev, to Dera Baba Nanak shrine in Gurdaspur district. ( /PTI] Dera Baba Nanak (Punjab), Nov 18 : With reopening of the Sri Kartarpur Sahib corridor, a delegation of the Punjab Cabinet and other dignitaries led by Chief Minister Charanjit Singh Channi, on Thursday left for paying obeisance at Gurdwara Sri Kartarpur Sahib. The Chief Minister, accompanied by Finance Minister Manpreet Singh Badal, PWD Minister Vijay Inder Singla, MLAs Harpartap Singh Ajnala and Barindermeet Singh Pahra and his family members crossed the border at around 1 p.m. to pay obeisance at Gurdwara Sri Kartarpur Sahib in Narowal in Pakistan on the pious occasion of Prakash Purb of Guru Nanak Dev. Describing the opening of Kartarpur Sahib corridor as a historic moment, Channi said that it was a joyous occasion as the corridor has facilitated numerous devotees to go to Sri Kartarpur Sahib. The long-pending 'ardaas' of Sikh 'sangat' has been fulfilled and now they can pay reverence at this holy shrine without any hindrance, said the Chief Minister, adding the reopening of the corridor will facilitate visa-free movement of Indian pilgrims to visit Kartarpur Sahib merely by obtaining a permit. The Chief Minister said he was fortunate enough to be part of 'sangat' paying homage since the demand of 'Khule Darshan-didar' of Gurdwara Sri Darbar Sahib was fulfilled after a long period. Channi said he would pray at Sri Kartarpur Sahib for further prosperity, peace and harmony of both sides. "Our gurus showed path of humility, unity, peace and welfare," he said, adding he hoped that the corridor will play a pivotal role in realising the great thoughts of "our great guru". /IANS

Budget 2022: Experts exhort Centre to regulate crypto trades
[St. Petersburg: An officer shakes snow off of honour guard soldiers in snowfall at the Piskaryovskoye Cemetery where most of the Leningrad Siege vict

Fed up of gym exercises, actress Rambha takes a break

Chennai, Jan 27 : One of Tamil and Telugu cinema's most popular actresses Rambha, who is now happily settled with her family in Canada, has announced that she is fed up with gym exercises and is going […]