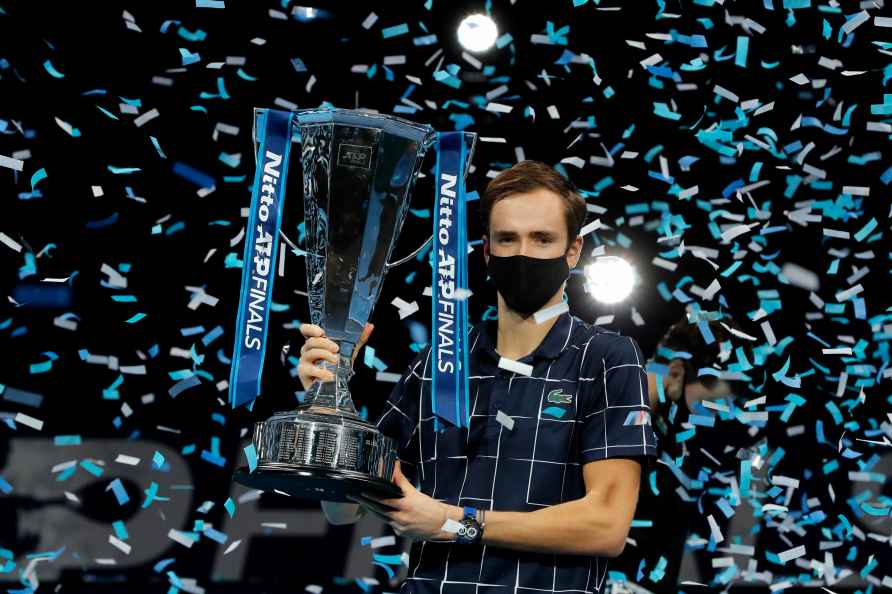 Turin, Nov 17 : Defending champion Daniil Medvedev of Russia secured a hard-fought 6-3, 6-7(3), 7-6(6) victory over Germany's Alexander Zverev at the Nitto ATP Finals to qualify for the semifinals as he moved to 2-0 in 'Red Group' action here. The US Open champion this year and the current world No. 2, who had defeated Hubert Hurkacz of Poland in his opening game, backed that up against Zverev as he slammed the ball with consistent depth and recovered from a slump in the second set to win after two hours and 35 minutes on Tuesday night. "Definitely one of the matches to remember," Medvedev told atptour.com. "When you win 8/6 in the tie-break in the third, it was 4/2 for him so I was like okay, he serves a few aces it's done. I made it 6/4 and I was like okay, that's my moment now. It's back to 6/6, you get really tight, because I wanted to make a brave move on the 6/5 second serve and volley, didn't work out at all. "He (Zverev) made an amazing shot. You are like maybe I should have stayed at the baseline. If I lose the match because of this it's going to be toughÂ? Just an amazing feeling. Not actually much to say about the match, just amazing," added Medvedev. The Russian, who edged Dominic Thiem of Austria to win the elite year-end title last year, has secured top spot in Red Group after Italy's Matteo Berrettini withdrew due to injury. Medvedev leads Zverev 6-5 in their ATP head-to-head, having won his past five matches against the world No. 3, including victories in Australia and Paris this year. The pair also met in the round-robin stage at the season finale in 2020, with Medvedev triumphing 6-3, 6-4. "Sometimes that's how tennis is," Medvedev added. "You just try to do your best. Sometimes luck is on your side, sometimes not. Sometimes it's more than just luck. I just try to do my best and I'm really happy the past seven matches went in my favour," said Medvedev. Zverev, who has captured five tour-level trophies this season, is now 1-1 in Red Group play and faces Hurkzcz in his final round-robin match. Italian Jannik Sinner gave fans plenty to cheer for, as he dropped just four games in his winning ATP Finals debut against Poland's Hurkacz. Sinner, the first alternate, replaced his injured countryman Berrettini after he withdrew from the tournament due to an abdominal injury. The 20-year-old, who became the fourth Italian to play singles at the Nitto ATP Finals in the event's 52-year history, won 6-2, 6-2. "It is an incredible feeling playing here in Italy with thousands of people cheering for you and I am trying my best. I will enjoy the moment. I played well and felt good in the warm up. It was an incredible match," said Sinner. The world No. 11 saved all five of the break points he faced against Hurkacz, who was also seeking his first win in Turin. Sinner broke the Pole's serve early in both sets, and he was rock-solid from the baseline to clinch the victory in an hour and 22 minutes. The win puts Sinner firmly in semifinal contention. He could reach the semifinal if he defeats Medvedev in their next match, or if Zverev loses to Hurkacz on November 18. With two defeats, Hurkacz currently sits at the bottom of the Red Group, while Medvedev has already booked his place in the last-four. /IANS

'I am having some unpleasant moments': Rafael Nadal tests positive for CVOID-19
New Delhi, Dec 20 : Former World Number one Rafael Nadal, who returned to action at the Mubadala World Tennis Championship in Abu Dhabi last week, on

Goa: Iv..n Garrido Gonz..lez of FC Goa celebrates after scoring a goal during their ISL match match against Odisha FC at the Tilak Maidan Stadium in Goa, Friday, Dec. 24, 2021. ( /PTI […]

Bengaluru: Devotees during a Maas prayer at St Basilica Church, on the eve of Christmas festival, in Bengaluru, Friday, Dec. 24, 2021. ( /PTI […]