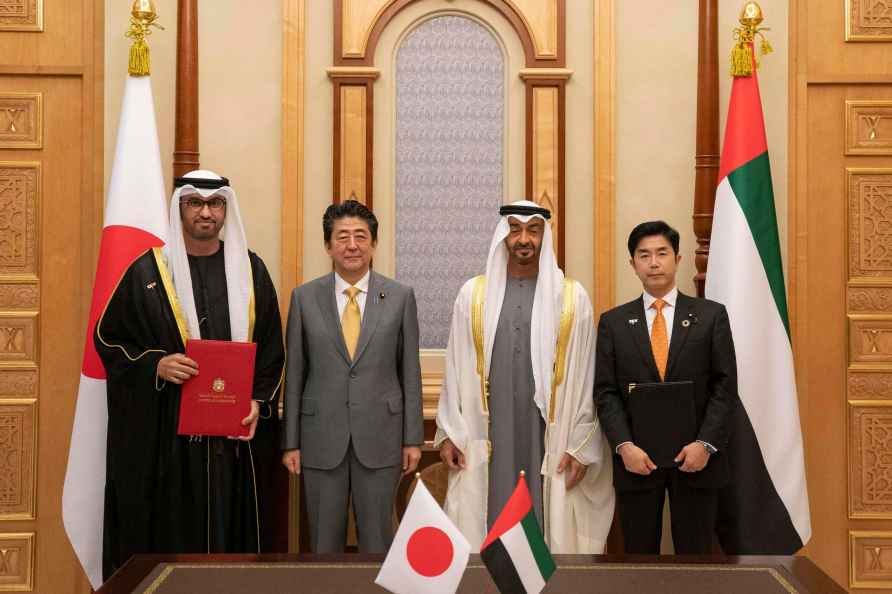 Abu Dhabi, Nov 17 : Energy ministers have affirmed commitment to net-zero goals during the Abu Dhabi International Petroleum Exhibition Conference (ADIPEC) held in the United Arab Emirates. Mohamed bin Mubarak Bin Daina, Bahrain's Special Envoy for Climate Affairs, Chief Executive of the Supreme Council for Environment, said Bahrain is committed to providing an efficient and affordable state of energy mix. "We have set up targets not just by renewables but also on conservation of energy. Our energy efficiency will be better by 10 per cent by 2025 and 20 per cent by 2035," Daina said during a panel discussion bringing nations together to tackle climate change. Similarly, Joao Galamba, Deputy Minister and Secretary of State for Energy, Portugal, said carbon neutrality will not be achieved without hydrogen. "There's a virtuous relation between renewables in general and green hydrogen. We have now created the conditions under which hydrogen cannot be a hype, it has to be a reality. Hydrogen solves some of the problems of renewables and renewables make hydrogen possible." Aissatou Sophie Gladima, Minister of Petroleum and Energies, Senegal, said nations should have easy access to technologies to resolve climate change issues. "For years and years, several resources have been taken from Africa and evaluated elsewhere. If they were evaluated locally there would have been some development in Africa. In Senegal, we took the decision to shift a company from coal to natural gas. If gas prices are increasing in Europe, we also need to depend on our local energy. We need to have easy access to technologies. So that everyone develops together." Meanwhile, Alparslan Bayraktar, Deputy Minister, Minister of Energy and Natural Resources, Turkey, said with heavy reliance on gas, the country is developing a diversification programme. "Gas is important for Turkey. It is a growing market. Turkey is the fourth largest gas consumer country in continental Europe. So, at some point we need to find an alternative supply. We are developing a diversification programme. We have enough infrastructure and we are ready to build additional pipelines and storage facilities. We have already completed two projects. So, the infrastructure is there, the sources are there, all we need is political commitment and willingness, and a pragmatic and creative approach to make this happen." ADIPEC is the world's "most influential" meeting point for oil, gas and energy professionals. The four-day event offers face-to-face meetings for the energy industry following the challenges of Covid-19. /IANS

Sayani Gupta : It's funny to be a semi-popular actor in public places
Mumbai, April 23 : She made her mark in Bollywood as well as in the web space with films like 'Margarita with a Straw', 'Fan', 'Jolly LLB 2','Article

'China-Pak ties to be better under Shehbaz Sharif than even Imran'
Beijing, April 11 : Chinese state media has said that the Sharif family of Pakistan has been promoting bilateral ties for a long time, and cooperation

Justice in Sacrilege cases will finally be delivered under AAP watch : Dhaliwal

Punjab Chief Minister Bhagwant Mann handed over handed over the land allotment letter to Tata group at Chandigarh, on Friday, for setting up its scrap based steel plant at an investment of Rs 2600 crore in Ludhiana

DW BUREAU / Chandigarh In a move aimed at giving further fillip to industrial development in the state, the Punjab Chief Minister Bhagwant Mann today handed over handed over the land allotment lett […]