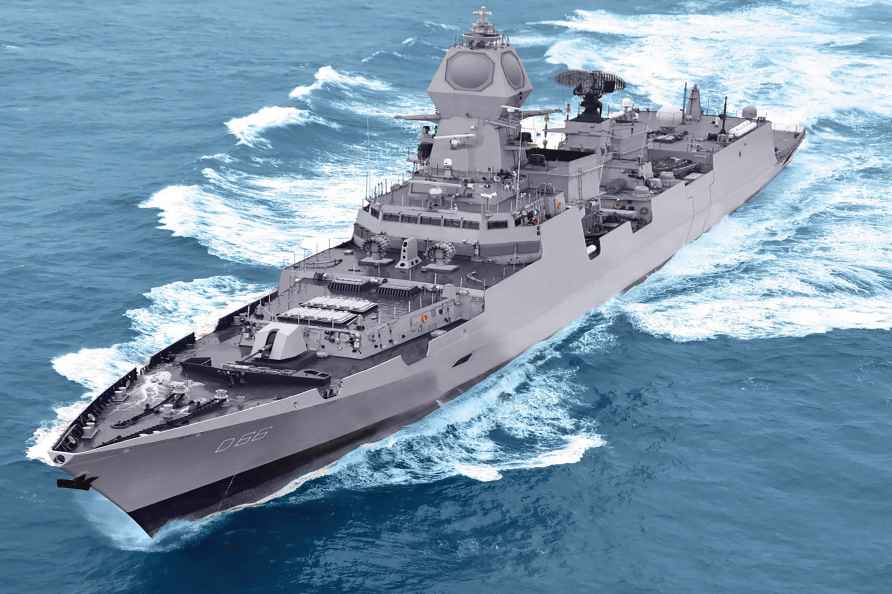 [**EDS: IMAGE PROVIDED BY DEFENCE PRO ON TUESDAY, NOV. 16, 2021.** New Delhi: A view of Visakhapatnam, the first stealth guided missile destroyer ship of the Project 15B. The ship is scheduled to be commissioned in the Indian Navy on November 21. ( /PTI] New Delhi, Nov 16 : Indian navy warship and a submarine of Scorpene design built at Mazagon Dock Shipbuilders Limited in Mumbai will be commissioned by November end, adding more fire power to the force. The commissioning of 'Visakhapatnam', the first ship of Project 15B to be held on November 21, and the Submarine Vela, the fourth submarine of the Kalvari Class, on November 25, both at the Naval Dockyard, Mumbai. Both the platforms have been built at Mazagon Dock Shipbuilders Limited, Mumbai. Vice Chief of Navy Vice Admiral S.N. Ghormode said, "We all know that the Maritime environment is a complex one and it only increases with more number of players involved. We live in a time when global and regional balances of power are shifting rapidly and the region of most rapid change is undoubtedly the Indian Ocean Region." "Continuous efforts are, therefore, on to ensure that our force levels grow progressively to enhance the capability of Indian Navy to meet the emerging challenges." He talked about the Navy's complete and focussed thrust on strategic independence in line with the 'Atmanirbhar Bharat' (Self reliant India) initiative of the government. Vice Admiral Ghormode said that Navy's in-house design organisation -- the Directorate of Naval Design has been developing indigenous designs for over 57 years now, ranging from small craft to the aircraft carrier, to which more than 90 ships have been built. Commissioning of 'Visakhapatnam' and 'Vela' are major milestones showcasing the indigenous capacity to build complex combat platforms, he said. This will enhance our capacity and fire power to address the threats in both above water and underwater domains. The commissioning of both these platforms has further strengthened the partnership between the Indian Navy, Mazagon Dock Shipbuilders Limited and Indian Industry, in the pursuit of self-reliance in both Warship and Submarine Design and Construction. He said that as many as 39 Naval ships and submarines are presently being constructed in various Indian shipyards. These projects have not only created employment opportunities for the personnel employed by the ancillary industries but almost 343 MSMEs have benefited from the construction activities by MDL in the last year alone. Vela is the fourth submarine of the Kalvari Class. Christened 'Vela', the submarine was launched on May 7, 2019, and has completed all major harbour and sea trials including weapon and sensor trials despite Covid restrictions. The Indian Navy will thus obtain yet another potent platform in its arsenal. Submarine building is a sophisticated exercise involving placing small components sequentially and logically inside the submarine as the space within is extremely constricted. Very few countries possess this ability in their industrial capacity. "India has proven its capability to build our own Submarines for the past twenty five years. Both Warship and Submarine building has immensely benefited the Indian industry as they too are able to align to the stringent quality control standards that these platforms demand," Vice Chief added. Visakhapatnam class ships, built with indigenous steel, are a follow-on of the Kolkata class destroyers commissioned in the last decade. Designed by Directorate of Naval Design, Indian Navy's in-house organisation; and built by Mazagon Dock Shipbuilders Ltd, Mumbai; the four ships are named after major cities of the country -- Visakhapatnam, Mormugao, Imphal and Surat. The commissioning of Visakhapatnam will reaffirm India's presence amongst an elite group of nations with capability to design and build advanced warships. The majestic ship measures 163 m in length, 17 m in breadth with a displacement of 7,400 tonnes and can rightfully be regarded as one of the most potent warships to have been constructed in India. The ship is propelled by four powerful Gas Turbines, in a Combined Gas and Gas (COGAG) configuration, capable of achieving speeds in excess of 30 knots. Visakhapatnam is packed with sophisticated 'state of the art' weapons and sensors such as Surface to Surface Missile and Surface to Air Missiles. The ship is fitted with a modern Surveillance Radar which provides target data to the gunnery weapon systems of the ship. The ship's Anti Submarine Warfare capabilities are provided by the indigenously developed Rocket Launchers, Torpedo Launchers and ASW helicopters. The ship is equipped to fight under Nuclear, Biological and Chemical (NBC) warfare conditions. /IANS