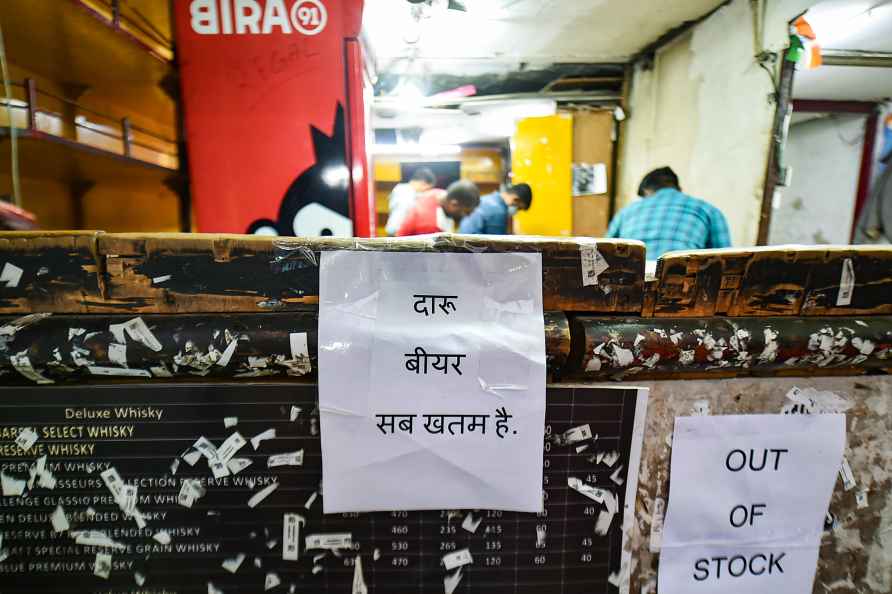 [New Delhi: Notices read 'Out of Stock', at a government liquor shop after the government announced permanent shutdown of liquor shops as a new excise policy comes into effect, in New Delhi, Tuesday, Nov. 16, 2021. ( /PTI] New Delhi, Nov 16 : The Delhi government will formally exit the liquor business as its 600 vends will be shut permanently from Tuesday night to pave way for swanky, new, privately owned shops that will begin operations from November 17. As many as 850 new private vends are set to begin operations under Delhi Government's new excise policy. However, of those only 300-350 shops are likely to start functioning from first day leading to liquor shortage in the city, a Delhi government official said. Gradually all the liquor vends will open up. "The liquor prices may start with slightly higher rates initially but will eventually settle down," the official added. Licences for the same have been distributed to all applicants in 32 zones. According to Delhi government data, the excise department had kept a total reserve price for all the 32 zones at around Rs 7,041 crore, and have earned about Rs 8,917.59 crore through bidding. This is the first time that all government-run liquor shops will be shut in the national capital and the business will be completely transferred to private players. As per the new excise policy introduced in July, people would be able to walk in and choose the brand of their choice, akin to shopping malls at the new liquor vends. The policy aims at revolutionising the consumer experience by replacing the existing liquor vends with swanky liquor stores spread over at least 500 square feet area with a walk-in facility. A liquor tasting facility will also be developed at these super-premium retail vends. /IANS