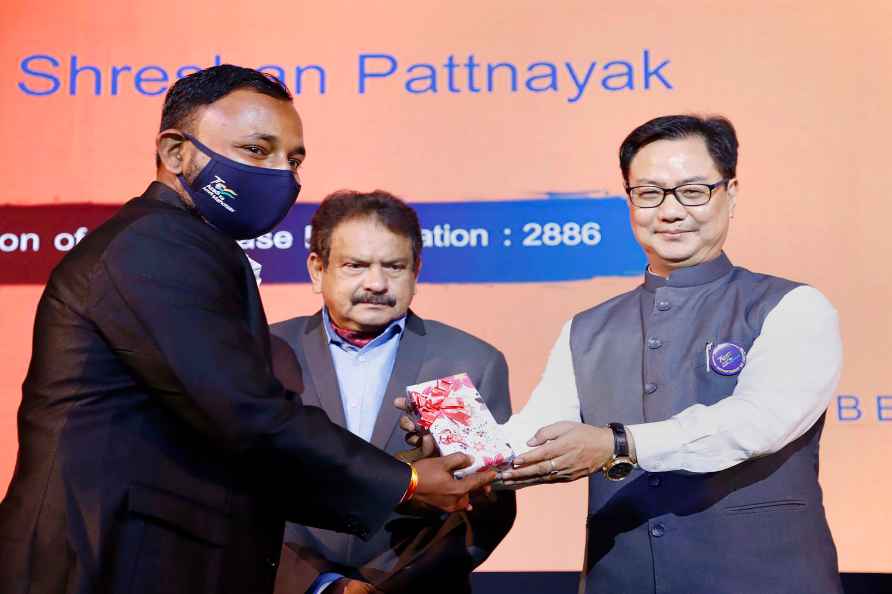 [**EDS: IMAGE MADE AVAILABLE FROM PIB** New Delhi: Union Minister for Law and Justice Kiren Rijiju felicitates a Tele-Law Frontline Functionary at the launch of the Citizen's Tele-Law Mobile App., in New Delhi, Saturday, November 13, 2021. Minister of State for Law and Justice S.P. Singh Baghel is also seen. ( /PTI] New Delhi, Nov 13 : Union Home Minister Amit Shah will chair the 29th meeting of the Southern Zonal Council, comprising the states of Andhra Pradesh, Tamil Nadu, Karnataka, Kerala, Telangana, and Union Territories of Puducherry, Lakshadweep, Andaman & Nicobar Islands, scheduled to be held at Tirupati on November 14. The Chief Minister of Andhra Pradesh is the Vice Chairman and host of the meeting. Other Chief Ministers from the states in the Zone along with two ministers each are the members. Chief Secretaries and senior officers from the state governments and the Central government will also attend the meeting. The meeting assumes significance in view of the increasing dispute over sharing of river waters between Telangana and Andhra Pradesh. The Karnataka government has made complaint about the plans of Telangana to construct the Palamuru Rangareddy and Nakkalagandi Lift Irrigation Scheme to draw large quantity of remaining and surplus water from the foreshore of Srisailam reservoir. The Zonal Councils take up issues involving Centre and states and one or many states falling in the Zone and provide a forum for resolving disputes and irritants between Centre and states and among many states in the Zone. The Zonal Councils discuss broad range of issues which include boundary related disputes, security, infrastructure related matters like road, transport, industries, water, and power, matters pertaining to forests & environment, housing, education, food security, tourism and transport etc. Five Zonal Councils were set up in the year 1957 under Section 15-22 of the States Re-organization Act, 1956. Union Home Minister is the Chairman of each of these five Zonal Councils and Chief Ministers of the host State (to be chosen by rotation every year) is the Vice-Chairman, while two more Ministers from each state are nominated as members by the Governor. /IANS

India-Myanmar border: Narco corridor to hotspot for smugglers of exotic species
[Tral: A vIllager plucks walnut from a tree during the harvest season, at Tral in Pulwama district of South Kashmir, Saturday, Sept. 10, 2022. Severa

Man meets sister in Kartarpur after separation from family in 1947
[**EDS: TO GO WITH FGN 15** Kartarpur: Jalandhar-based Sikh man Amarjit Singh's met his Muslim sister from Pakistan at Gurdwara Darbar Sahib in Kartar

Jammu: Apni Party President Altaf Bukhari along with others during a public rally at Baribramhna area on the outskirts of Jammu, Sunday, Sept. 11, 2022. ( /PTI […]

Prayagraj: Priests with devotees from Jain community perform a ritual on the occasion of "Kshamavani Parv'' at a Jain temple, in Prayagraj, Sunday, Sept. 11, 2022. ( /PTI […]