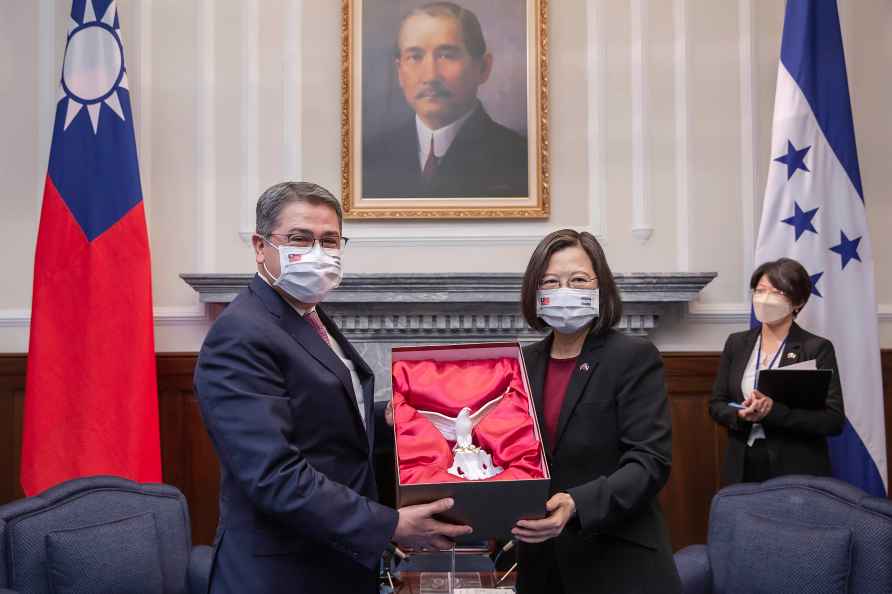 [Taipei: In this photo released by the Taiwan Presidential Office, outgoing Honduran President Juan Orlando Hernandez, left, exchanges gifts with Taiwanese President Tsai Ing-wen during a meeting in Taipei, Taiwan Saturday, Nov. 13, 2021. Hernandez started a three-day surprise visit to Taiwan on Friday as the self-ruled island, which is also claimed by China, worries that the next president of the Central American nation may break off relations and switch to diplomatic ties with Beijing. /PTI] By Nikhila Natarajan New York, Nov 13 : US President Joe Biden and Chinese President Xi Jinping will hold a virtual summit Monday evening, the White House said. The high-stakes meet is set amid increasing hostility among the world's two largest economies. "The two leaders will discuss ways to responsibly manage the competition between the US and the PRC, as well as ways to work together where our interests align. Throughout, President Biden will make clear US intentions and priorities and be clear and candid about our concerns with the PRC," White House Press Secretary Jen Psaki said in a statement. PRC is the acronym used by Psaki for the People's Republic of China. There has been no summit-level meeting between the two countries since June 2019, when Xi and then President Donald Trump sat together on the sidelines of a G-20 summit in Japan. Biden and Xi have had two phone calls so far. Xi has not travelled outside China since the start of the pandemic. He missed the climate summit in Glasgow. "We expect him (Xi) to play by the rules of the road," Biden said earlier this month. "I want to make sure there's no misunderstanding. It's competition, not conflict." Biden's approval numbers Friday bounced back from late-October bruises after the House approved his $1.2 trillion bipartisan infrastructure plan. A Navigator Research survey of approximately 1,000 registered voters conducted from November 4 to November 8, said 47 per cent of Americans now approve of the way Biden is handling his job as president. Fifty per cent still disapproved and three per cent were unsure. That's a seven-point jump from the poll conducted in late October. Xi, on his part, is on a historic high: The Chinese Communist Party approved a resolution Thursday setting the foundation for him to continue his rule through 2027. The resolution said Xi's ideals represented "the essence of Chinese culture", and establishing Xi's position as the central part of the party was "of decisive significance" in achieving "the great rejuvenation of the Chinese nation". While the list of disagreements -- trade to technology to Taiwan -- is long, in a surprise move this week, China and the US agreed to boost climate co-operation over the next decade. The world's two biggest CO2 emitters pledged to act in a joint declaration and recall their "firm commitment to work together" to achieve the 1.5C temperature goal set out in the 2015 Paris Agreement. Both called for stepped-up efforts to close the "significant gap" that remains to achieve that target. (Nikhila Natarajan tweets @byniknat) /IANS

Mumbai, Jan 21 : Stand up comedian Amit Tandon is back with an upcoming comedy show 'Goodnight India'. He says there is a huge market in our country which craves clean comedy. On being a part of […]

On 11 years of 'Dhobi Ghat', Prateik Babbar calls the film a game-changer

Mumbai, Jan 21 : As 'Dhobi Ghat' completes 11 years on Friday, actor Prateik Babbar maintains that the film was a game-changer for him. The Kiran Rao directorial, which also stars Aamir Khan and […]

Mumbai, Jan 21 : Honouring the creative prowess of the late Puneeth Rajkumar, Prime Video on Friday announced the premiere of three new Kannada movies from his PRK Productions. The films are 'Ma […]