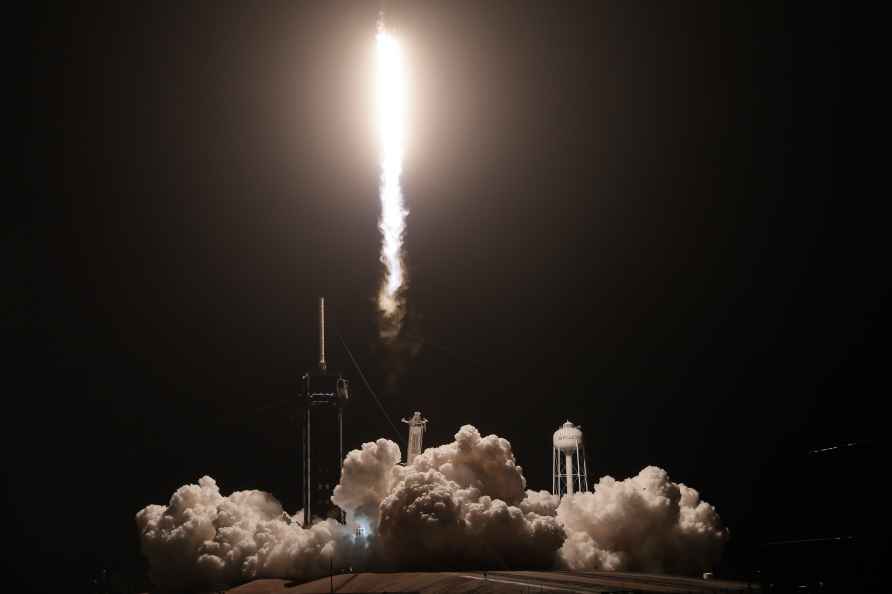 [Cape Canavera: A SpaceX Falcon 9 rocket with the Crew Dragon capsule lifts off from Launch Pad 39A at the Kennedy Space Center in Cape Canaveral, Fla., Wednesday, Nov. 10, 2021. /PTI] Washington, Nov 11 : NASA and the Elon Musk-owned private rocket company SpaceX have finally launched four more astronauts on a flight to the International Space Station (ISS). After a number of delays, the launch finally took off from NASA's Kennedy Space Center in Cape Canaveral, Florida at 9.03 p.m. on Wednesday, launching on top of one of SpaceX's Falcon 9 rockets. "Crew 3" comprises NASA astronauts Raja Chari, mission commander; Tom Marshburn, pilot; and Kayla Barron, mission specialist; as well as ESA (European Space Agency) astronaut Matthias Maurer, who will serve as a mission specialist, to the space station for a six-month science mission, staying aboard until late April 2022. This is the third crew rotation mission with astronauts on the SpaceX Crew Dragon spacecraft and the fourth flight with astronauts, including the Demo-2 test flight, as part of the agency's Commercial Crew Programme. Aboard Dragon with the crew will be more than 400 pounds of supplies and hardware, including over 150 pounds of which they will use to conduct experiments aboard the space station. Here is some of the research riding with them into low-Earth orbit. In addition to the experiments flying with them aboard Dragon, the Crew-3 astronauts are also scheduled to conduct many additional experiments and technology demonstrations during their mission. Crew-3 is crucial for the testing of new upgrades to the space station's Environmental Control and Life Support System (ECLSS), including the newly installed toilet, the Brine Processing Assembly, carbon dioxide scrubbers, and two new hydrogen sensors slated to arrive aboard a SpaceX Cargo Dragon in late December. /IANS