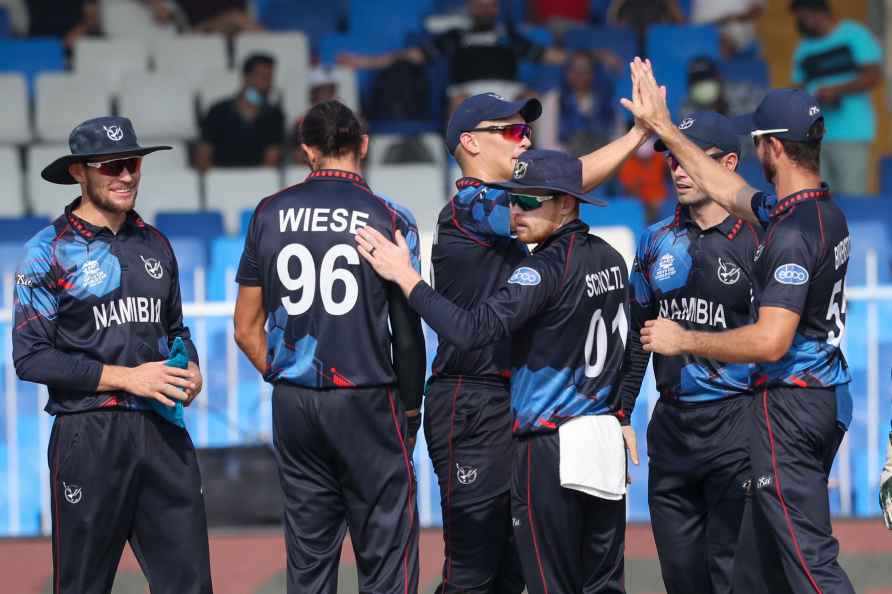 [Sharjah: Namibia players celebrate after taking the wicket of New Zealand's Martin Guptill during the Cricket Twenty20 World Cup match between New Zealand and Namibia, in Sharjah, UAE, Friday, Nov. 5, 2021. /PTI] Sharjah, Nov 5 : New Zealand spinner Mitchell Santner conceded Namibia would be "dangerous" on a tricky Sharjah wicket during their clash later on Friday, following their gritty display in a losing cause against Pakistan and a four-wicket win against Scotland in their opening 'Super 12' game at the ICC T20 World Cup here. Despite being the underdogs, Namibia have had fruitful outings at the T20 World Cup and the Black Caps wouldn't want to take any risks with the side by underestimating their potential, given that the Kane Williamson-led side has one foot in the semifinals. "They are (dangerous} for sure. Especially in T20 cricket. There's an upset just around the corner. We've got to be ready... We've seen the wicket at Sharjah can be tricky, and it brings both teams back into it, said Santner ahead of the afternoon game on Friday. "Namibia have played some good cricket. And so we've just got to be ready for that, ready for what the pitch is going to bring, (and ready for) a day game is obviously something new again in Sharjah." After two wins in three games, New Zealand are third on the 'Super 12' Group 2 table. If they win their final two matches, they will jump ahead of Afghanistan to claim the second position, which will confirm a spot in the semifinals. Pakistan have already secured a last-4 berth with four-of-four wins in 'Super 12'. The first of those two must-win matches is against Namibia in Sharjah. Scotland gave New Zealand a good fight in their previous game, so the Black Caps will be wary of underestimating the threat posed by the Associate Nation. New Zealand have been clinical in their performances so far, keeping it simple and doing well to win the crunch moments against India and Scotland. Against Pakistan, they were in the game for long periods of time until Asif Ali's late six-hitting took the game away. Their biggest challenge is the quick turnaround and the change in conditions to Sharjah. "It's pretty full on. All day games as well. So it takes a lot of out of you," said Santner, New Zealand's left-arm spinner, adding that the team was focused on rest and recovery when they could. "The biggest adjustment (we need to make) - obviously there's a bit of difference playing in Sharjah versus outside the other two grounds. In New Zealand you're looking for a bit of bounce, trying to bowl hard length into the wicket, get a bit of bounce, and you don't really get that at Sharjah, where it actually sits up," he told icc-cricket.com. "The guys that have done well at Sharjah are the guys that are skiddier out in the front and keeping it low. That's probably the biggest adjustment for me and Ish [Sodhi] where in the past you look for that over-spin and bounce, it's a little less effective in Sharjah." Namibia, too, mathematically still have a chance to qualify for the semifinal, but they will be taking one match at a time, keen to first put in performances that ensure they are constantly competing with the higher-ranked sides. New Zealand have worked like a swell-oiled machine, with several players doing their bit in defined roles. Martin Guptill's 93 against Scotland was perhaps the first big example of individual brilliance from them. Namibia could bring back Bernard Scholtz, the left-arm spinner, especially if the Sharjah surface has something for spin. They have tweaked their opening combination for a few games, but might stick to the Stephan Baard-Michael van Lingen one for another game. There are injury concerns over their captain Gerhard Erasmus, who has been managing a long-standing finger injury with injections. "We know New Zealand are a tough opposition. They've got world-class players there. And we're again being seen as the underdogs in the game, but we've played the games at Sharjah before, we've had a bit of success at Sharjah, and we think it's a wicket that could suit our type of bowling. So we've done our prep," said Namibia all-rounder David Wiese. Probable XI: Martin Guptill, Daryl Mitchell, Kane Williamson (capt), Devon Conway (wk), Glenn Phillips, Jimmy Neesham, Mitchell Santner, Adam Milne, Tim Southee, Trent Boult, Ish Sodhi. Probable XI: Stephan Baard, Michael van Lingen, Craig Williams, Gerhard Erasmus (capt), David Wiese, JJ Smit, Nicol Loftie-Eaton, Zane Green (wk), Jan Frylinck, Ruben Trumpelmann, Bernard Scholtz. /IANS

Biden pledges to 'get inflation under control'
[Washington: President Joe Biden speaks during a news conference in the East Room of the White House in Washington, Wednesday, Jan. 19, 2022. /PTI]

Characterisation of Ranjini is exactly what I am in real life: Abhirami Venkatachalam

Chennai, Jan 19 : Actress Abhirami Venkatachalam, who plays Ranjani in the micro-series 'Aanandham Aarambham' on Disney+ Hotstar, says that the characterisation of Ranjani is exactly what she is in re […]

New Delhi, Jan 19 : With an aim to ensure the sufficient number of the IAS officers for the Central deputation, the Ministry of Personnel, Public Grievances and Pensions is planning to amend the exist […]

Panaji, Jan 19 : The Nationalist Congress Party (NCP) and the Shiv Sena on Wednesday announced a pre-poll alliance between the two parties for the February 14 Goa Assembly polls. Addressing a jo […]