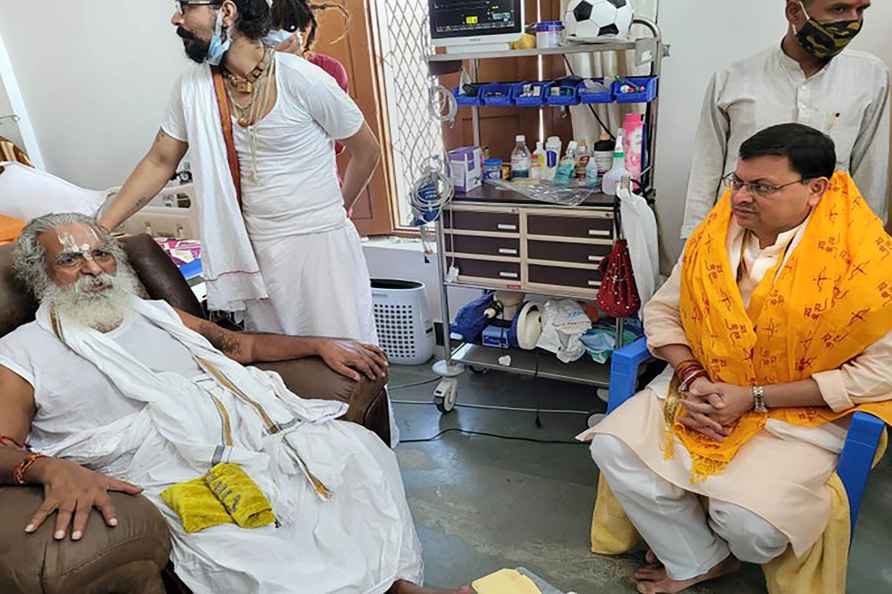 [**EDS: TWITTER IMAGE POSTED BY @pushkardhami ON SUNDAY, OCT. 17, 2021**Ayodhya: Uttarakhand Chief Minister Pushkar Singh Dhami meets Shri Ram Janmabhomi Teerth Kshetra Trust president Mahant Nritya Gopal Das in Ayodhya. ( /PTI] Ayodhya (Uttar Pradesh), Oct 17 : Uttarakhand Chief Minister Pushkar Singh Dhami has said that politics was never separate from religion and both had always supplemented each other. Dhami, who is on a two-day visit to Ayodhya is the first Uttarakhand CM to offer prayers to Lord Ram after the Supreme Court paved the way for construction of the temple by ruling in its favour on November 9, 2019. "From childhood, we had dreamed and wished for Ram temple in Ayodhya. Now, it is becoming a reality. I have visited Ayodhya several times since I studied in Lucknow University but this time, it is different," he told reporters. Dhami said, "This is not a political visit. I have been associated with the Akhil Bharatiya Vidyarthi Parishad (ABVP) and have visited Ayodhya at least 50 times. I have been coming to Ayodhya since my childhood. Politics was never separate from religion. In fact, both supplemented each other." Talking about farmers, he said, "I belong to a farmer family and people in my family are also in the army. Our governments are continuously working for farmers. All schemes of Prime Minister Narendra Modi for farmers are being implemented in Uttarakhand. Be it Kisan Samman Nidhi, doubling farmers' income or any other scheme, all of them are being rolled out." On forthcoming Assembly polls in Uttarakhand, Dhami said, "There are five Lok Sabha and two Rajya Sabha MPs in Uttarakhand. For the Assembly poll we have given the slogan 'Is bar 60 par'." Dhami will preside over the bhumi pujan event of an ashram on Sunday, which is being constructed by the Delhi Seva Dham. He offered prayers at various temples and met Mahant Nritya Gopal Das, chairman of Sri Ram Janmabhoomi Teerth Kshetra Trust at Mani Ram Das Chhavni Peeth. /IANS

Starc, Head in as Cummins announces his Ashes Playing XI
[Brisbane: Australian captain Pat Cummins, left, and England captain Joe Root pose with the Ashes trophy at the Gabba cricket ground ahead of the firs

Chennai, Dec 4 : Actor-politician Kamal Haasan on Saturday expressed his condolences to the family former Tamil Nadu Governor Rosaiah, who passed away in Hyderabad on Saturday. Taking to Twitter […]

Lumajung: Remains of a bridge is seen in a slope, destroyed by the flowing lava by the eruption of Mount Semeru in Lumajang, East Java, Indonesia, Sunday, Dec. 5, 2021. The death toll from eruption of […]

Starc, Head in as Cummins announces his Ashes Playing XI