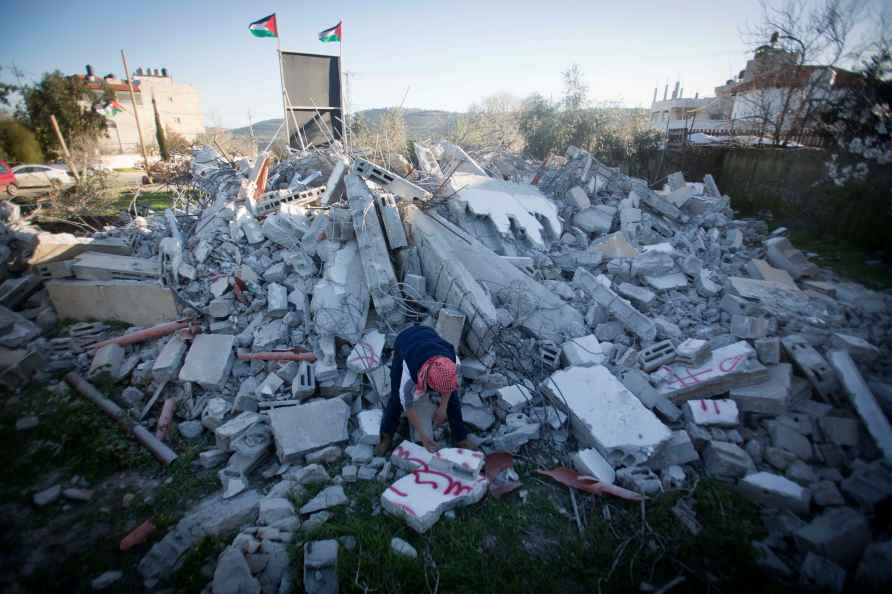 Ramallah, Oct 16 : Palestine has warned that the consequences of more Israeli settlement plans in Jerusalem "will be dangerous", the official WAFA news agency reported. "The Israeli plans to build hundreds of housing units for Israeli settlers in several illegal settlements surrounding the occupied (East) Jerusalem are dangerous," WAFA quoted Palestinian President Mahmoud Abbas's office as saying. These plans will "cut off the city from its Palestinian surroundings" and pose "a challenge to international law and international resolutions", the office added. The plans "contradict the signed agreements and the commitments repeatedly expressed by the US in which it affirmed that it considers settlement expansion and unilateral measures an unacceptable act". Abbas's office called on the US to maintain its positions and implement what President Joe Biden announced in his call with Abbas that he rejects "any unilateral measures", Xinhua news agency reported on Saturday According to official Palestinian figures, since 1967, more than 600,000 Israeli settlers have been living in 140 settlements in the West Bank and East Jerusalem, home to more than 3 million Palestinians. Israel occupied the West Bank and East Jerusalem, which are claimed by the Palestinians, in the 1967 Middle East war and has controlled them ever since. The Palestinians want to establish their independent Palestinian state on these territories. "The path to peace is clear: establishing an independent Palestinian state on the 1967 borders with East Jerusalem as its capital," the statement said, referring to Abbas's speech in September before the UN General Assembly. /IANS

Tel Aviv, Nov 24 : Israeli Prime Minister Naftali Bennett said that his country will not be bound by any new nuclear deal with Iran. Speaking in a conference at the Reichman University north of […]

San Francisco, Nov 24 : Dell Technologies has announced a record third quarter (Q3) results, generating revenue of $28.4 billion (up 21 per cent) with a net income of $3.9 billion, driven by growth ac […]

IND v NZ: Going to be a different challenge to what we get back home, says Jamieson

Kanpur, Nov 24 : New Zealand all-rounder Kyle Jamieson feels that playing Test cricket in India will be a different challenge, considering he is touring the country for the first time. He added that h […]