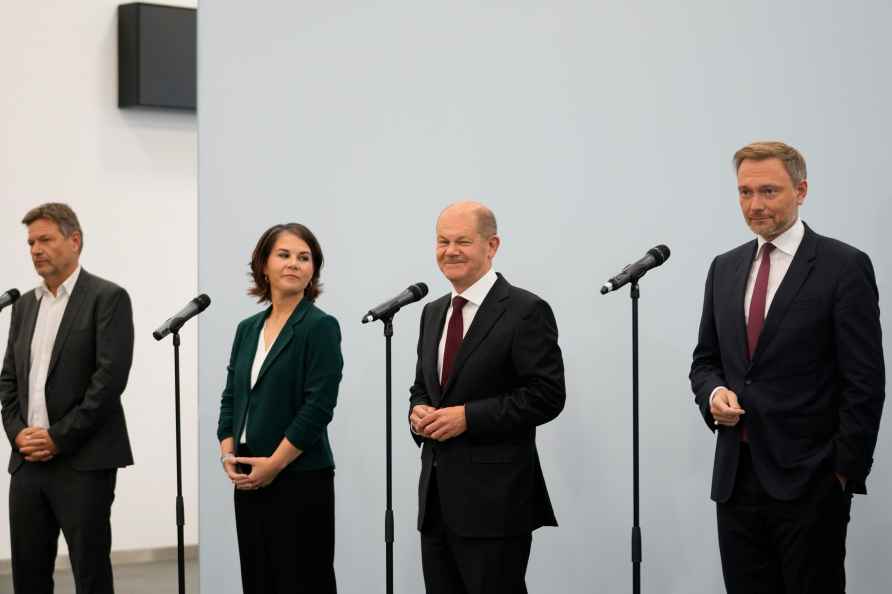 [Berlin: Social Democratic Party, SPD, chancellor candidate Olaf Scholz, second from right, the Green party leaders Annalena Baerbock, second from left, and Robert Habeck, left, and the Free Democratic Party, FDP, chairman Christian Lindner, right, attend a joint news conference in Berlin, Friday, Oct. 15, 2021. After the parliamentary elections on September 26, the leaders of the three parties announced that they would recommend coalition talks for a new German government. /PTI] Kunming (China), Oct 15 : With the participation of almost 2,918 delegates in Kunming and 2,478 connecting virtually, the UN Biodiversity Conference (COP-15) closed on Friday, setting the stage for the adoption of an effective post-2020 global biodiversity framework at the resumption of the meeting in spring 2022. The conference's two-day High-Level Segment, which opened with the announcement by Chinese President Xi Jinping of the 1.5 billion-yuan (about $233 million) Kunming Biodiversity Fund, saw the adoption of the Kunming Declaration, where parties to the Convention on Biological Diversity (CBD) committed to negotiate an effective post-2020 global biodiversity framework that can bend the curve of biodiversity loss. The landmark framework, due for adoption at the resumption of the UN Biodiversity Conference in May 2022 following further formal negotiations in January 2022, gives clear political direction for those negotiations. Important initiatives and commitments introduced during the meeting included the announcement by the Global Environment Facility, in partnership with the UN Development Programme and the UN Environment Programme, that they will fast-track financial and technical support to developing country governments to prepare for the rapid implementation of the post-2020 global biodiversity framework. Moreover, the European Union announced it is doubling external funding for biodiversity, President Emmanuel Macron of France committed 30 per cent of climate funds to be used for biodiversity, the UK government announced that a significant part of its increased climate funding will be directed towards biodiversity, the government of Japan announced a $17 million extension to its Japan Biodiversity Fund, and a coalition of financial institutions, with assets of 12 trillion euro, committed to protect and restore biodiversity through its activities and investments. Elizabeth Maruma Mrema, Executive Secretary of the Convention on Biological Diversity, said: "With the conclusion of the first part of COP-15, we have taken a critical step towards writing a new chapter for our planet and for our societies. "The adoption of the Kunming Declaration, and the strong political direction provided by many ministers has put us firmly on the path to the adoption of an effective post-2020 global biodiversity framework that will engage the entire world in the task of putting nature on a path to recovery by 2030. "Further, the government of China's announcement of the Kunming Biodiversity Fund, and the joint commitment by the GEF, UNEP and UNDP, among other commitments, gives us confidence that the new framework will be rapidly implemented." The meeting also saw China assuming the role of COP-15 Presidency, the adoption of an interim integrated budget for 2022 for the Convention, the Cartagena Protocol on Biosafety and the Nagoya Protocol on Access and Benefit-sharing, and a progress report from the co-chairs of the Open-ended Working Group on the Post-2020 Global Biodiversity Framework. Many non-state actors participated the meeting, ensuring good participation of a wide range of stakeholders. Global leaders participating in the conference included President Xi, Egypt President Abdul Fattah al-Sisi, Russian President Vladimir Putin, French President Macron, Costa Rica President Carlos Alvarado Quesada, Papua New Guinea's Prime Minister James Marape, The Prince of Wales, and UN Secretary General Antonio Guterres. /IANS

Toronto, Nov 27 : The amount of a SARS-CoV-2 genetic material -- viral RNA -- in the blood is a reliable indicator in detecting which patients will die of the infectious disease, researchers have foun […]

Thiruvananthapuram, Nov 27 : A retired Kerala IPS officer is undergoing treatment at a Kochi hospital after his two-wheeler was hit by another vehicle. Though on the surface it seems to be a sim […]

Gurugram: Sharad Agarwal, Head, Lamborghini India flags off a convoy of over 50 Lamborghinis as part of the Lamborghini Espierenza Giro India 2021, at Manesar in Gurugram, Saturday, Nov. 27, 2021. ( / […]