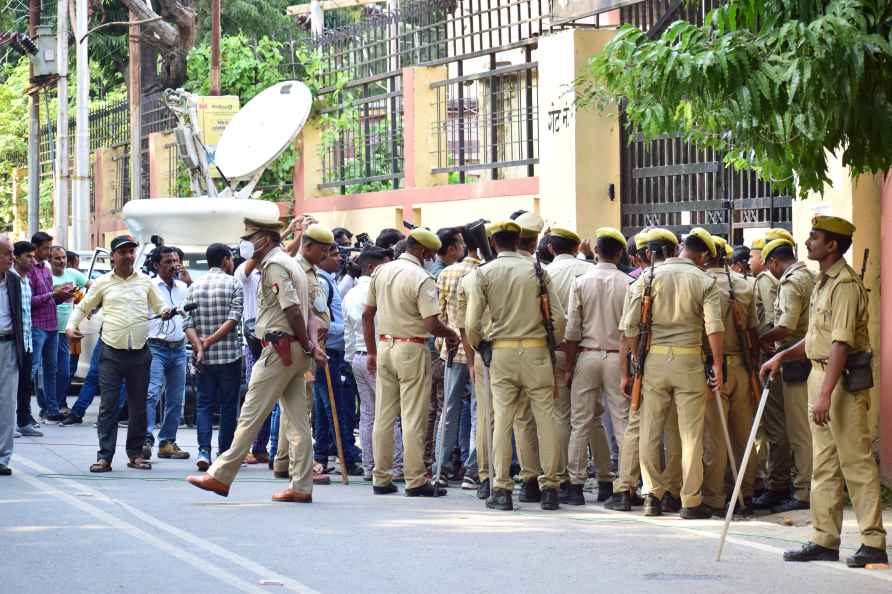 [Lakhimpur Kheri: Security arrangements around the court premises in Lakhimpur Kheri in view of hearing on Ashish Mishra's police custody remand, in Lakhimpur Kheri, Monday, Oct. 11, 2021. ( /PTI] Lakhimpur Kheri (UP), Oct 11 : A local court in Lakhimpur Kheri on Monday sent Ashish Mishra, son of Union Minister Ajay Mishra Teni, to three days police custody in connection with the October 3 violence. He will, however, have access to his legal team during the period of police remand. The Special Investigation Team, set up by the Yogi Adityanath government to probe the incident, had sought 14 days police remand of Ashish Mishra from the Chief Judicial Magistrate in order to carry out further investigations and recreate the crime scene. The public prosecutor said the custody can be demanded within 15 days of the arrest. "It was pure non-cooperation. During the 12 hours, he did not reply," the public prosecutor said. Mishra's counsel Avadesh Singh said, "They interrogated him for 12 hours. How much do they need to interrogate? Do they want to apply third degree on the accused? You can't beat him and take his statement... They have not given any reason why they need remand." The hearing in Ashish Mishra's remand case concluded with his lawyer denying all the allegations levelled against his client by the Uttar Pradesh Police. Some technical issues in video conferencing were reported when the court was to start the hearing in the case. The judge left the court room as there was a delay in connecting the video. Mishra was arrested late on Saturday night and produced the same night before a magistrate who sent him to judicial custody. /IANS

Nasa, SpaceX finally launch 4 astronauts on Crew-3 mission to ISS
[Cape Canavera: A SpaceX Falcon 9 rocket with the Crew Dragon capsule lifts off from Launch Pad 39A at the Kennedy Space Center in Cape Canaveral, Fla

Rani, Saif on how they pulled off Abu Dhabi heist shoot for 'Bunty Aur Babli 2'

Mumbai, Nov 10 : Bollywood actors Rani Mukerji and Saif Ali Khan, who are gearing up for the release of their upcoming film 'Bunty Aur Babli 2', have opened up about a heist scene they shot in Abu Dha […]

New Delhi, Nov 10 : Delhi High Court on Wednesday rejected a petition filed by the Central Bureau of Investigation (CBI) challenging an order that allowed to inspect the documents, which were seized d […]